What can be done to prevent the pressures of climate change leading to conflict? 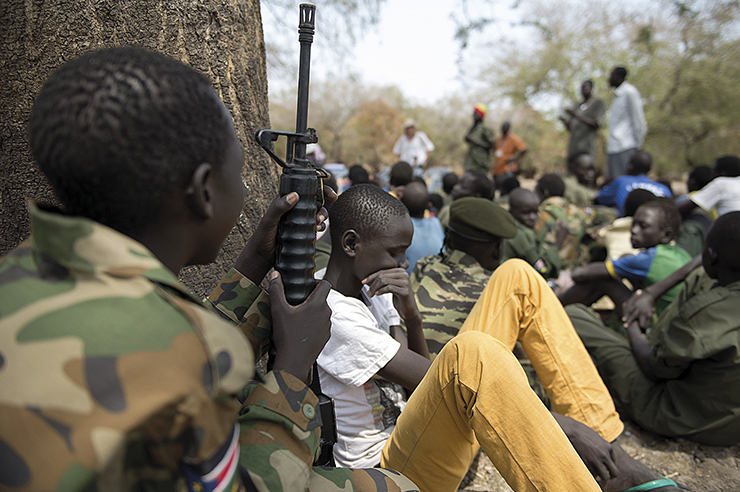 Child soldiers at a disarmament and reintegration ceremony in South Sudan. Climate change is a factor  in many conflicts in the Sahel and surrounding areas.  © Charles Lomodong/AFP/Getty Images

What can be done to prevent the pressures of climate change leading to conflict?

As the frequency and severity of adverse impacts associated with climate change increase, there is a critical need to better understand how, when and where climatic changes may affect the likelihood of various forms of conflict and political violence. With the exception of a few academic pieces that find a strong direct link between variability in weather patterns and conflict, most of the academic community have concluded that these associations are highly conditional, with some studies finding no relationship.

However, climate change, either through abrupt disasters or a slower shift in weather patterns, is projected to influence many known drivers of conflict. To the extent that limiting the end-of-century global mean temperature rise to 2°C or below will reduce the effects on these known stressors, the overall likelihood of conflict should also be reduced relative to high-end climate change scenarios.

In the shorter term, however, peace-building is possibly the most effective policy to reduce climate-related risks by strengthening conflict-affected communities’ coping capacity and resilience to environmental change.

In the absence of reductions in greenhouse gas (GHG) emissions, unabated climate change is projected to affect almost all aspects of human wellbeing.

Causal pathways
Four indirect causal pathways emerge as having the potential to increase the number of outbreaks as well as alter the intensity and location of conflict: loss of livelihood; migration; food insecurity; and economic shocks and underperformance.

Both extreme flooding and prolonged drought can result in loss of livelihood, especially in areas that rely on rain-fed agriculture, which could sow conditions for increased violence by lowering the economic costs of participating in violent activities. There is empirical evidence supporting this pathway in some contexts.

However, these results are not uniform across all regions, suggesting that pre-existing adaptive capacity and resilience may play a moderating role.

Loss of livelihood may also be the proximate cause of migration, often referred to as ‘environmental’ or ‘distress’ migration. For example, year-upon-year drought can result in the migration of entire communities, often to urban centres. Large numbers of new migrants can put a strain on services in cities, especially where authorities are already struggling to provide for existing residents. This could then foster anti-government riots and social unrest.

Further, an increase in fragmentation along ethnic lines may present an additional stressor for unrest. On the other hand, migration may also be an adaptive measure that lessens exposure and reduces damages. More systematic research is needed on the causes and outcomes of environmental migration.

Separately, food price spikes and food insecurity are associated with instability. Riots in response to price spikes, however, are most frequently seen in countries with low institutional capacity and a high incidence of poverty. While climatic variability, such as drought, is one of many factors that influence prices, sound domestic policies can buffer these effects.

Finally, economic growth is strongly correlated with a decreased likelihood of armed conflict. Climate change may affect economic growth through natural disasters as well as prolonged shifts, especially in agricultural-based economies. Ongoing underperformance can also slow societal gains, such as educational attainment, as well as undermine the stability of political regimes, which would further increase the propensity for conflict.

Indirect effects
While the unprecedented nature of climate change may limit the degree to which the recent past can provide a guide for projections of future conflict, it is clear that the effect of climate change on conflict will vary according to the affected societies’ level of development.

As the impacts of climate change can hinder socioeconomic development,  climate change may constitute a significant ‘threat multiplier’ to stability in already vulnerable societies, such that regions that are conflict-prone will face an increased likelihood of conflict.

The indirect effects may further amplify over time and potentially lead to ‘conflict trap’ type dynamics, especially in poor countries, as many of the factors that  make countries prone to violence increase their vulnerability to the impacts of  climate change.

However, some pathways for future socioeconomic development that facilitate peace may not necessarily facilitate mitigation and adaptation to climate change. For example, while economic growth lowers the risk of armed conflict, this growth is generally associated with increased GHG emissions and increased costs of mitigation policies.

As the effect of climate change on conflict is indirect, policies for mitigation and adaptation to climate change can both play a role in containing the security concerns it raises. According to the Intergovernmental Panel on Climate Change, staying below a 2°C rise in the end-of-century global mean temperature will avert the most serious impacts that would accompany extreme climate change.

This temperature target has been incorporated into the UN Framework Convention on Climate Change and was renewed in the Paris Agreement, which was accompanied by intended nationally determined contributions that outline each country’s mitigation and adaptation plans.

Pathways with strong climate mitigation may reduce aggregate long-term risks  of climate change on conflict; however, they may not necessarily lessen conflict  risk in the absence of development and peace-building.

Additionally, the 2°C target does not preclude all climate damages: adaptation will be required to offset the unavoidable risks. Measures to help regions that are negatively affected adapt to these changes will be important to minimise any political violence indirectly emerging from the adverse changes.

While the global incidence of armed conflict has declined markedly in recent decades, the last few years have seen an increase in unrest, with new and entrenched civil wars such as that in Syria. It is essential to continue to develop efforts to prevent a further reversal of the overall trend. International assistance in the form of effective development aid and peace-building assistance is likely the most effective means to simultaneously reduce climate and conflict risks.