After years of negotiation, last year’s climate conference was rightly hailed as a success. We now need to ensure that the best deal politics could get produces the global transformation we need 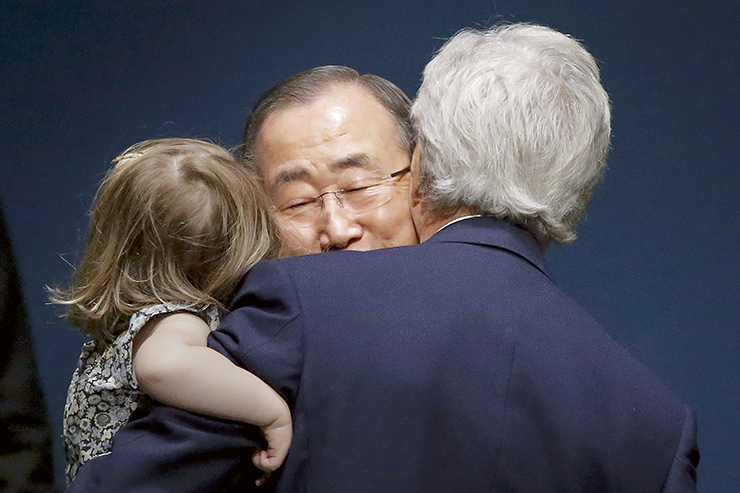 UN Secretary-General Ban Ki-moon embraces US Secretary of State John Kerry and his granddaughter after signing the Paris Agreement at United Nations Headquarters in New York on 22 April 2016.  © Carlo Allegri/Reuters

After years of negotiation, last year’s climate conference was rightly hailed as a success. We now need to ensure that the best deal politics could get produces the global transformation we need

In December 2015 – nearly a quarter of a century after they first resolved to tackle climate change – world leaders adopted a new framework that will determine the global response to climate change for the next 15 years.

Hailed as a “historic turning point” by Laurent Fabius, the Foreign Minister of France, which hosted the 21st Conference of the Parties (COP) to the UN Framework Convention on Climate Change (UNFCCC), the Paris Agreement signals unparalleled international ambition to curb global warming. But its success will depend on how it is implemented at the national and local level, and whether it will evolve into the transformative mechanism we need.

While cheers accompanied the announcement that agreement had been reached, a sigh of relief would have better captured the moment that was 23 years in the making. In 1992, the UNFCCC was created to “prevent dangerous anthropogenic interference with the climate system”. Back then it was not inconceivable that the convention might develop into a robust mitigation treaty. It made clear that all countries needed to take action, with those overwhelmingly responsible for cumulative emissions leading the way.

Two decades of delay
But it was not to be. It took two years for the UNFCCC to enter into force, another three for the Kyoto Protocol – which set binding emissions targets for 37 industrialised states – to be agreed, and a further eight for it to enter into force.

Although the Protocol managed to achieve some reductions, particularly within the EU, it was hamstrung from the outset. The US, then the world’s biggest emitter, did not ratify it. Major emerging economies, having argued alongside many developing states that they bore little historical responsibility for emissions, were exempt from binding targets. Canada later withdrew.

When discussions on a successor to Kyoto started in 2005, they marked the beginning of a decade of fractious COPs. Japan, New Zealand and Russia announced they would not take on further Kyoto commitments, and the US – soon to be overtaken by China as the world’s largest emitter – was unwilling to commit if large developing states were again excluded. Efforts by the UN and civil society to create a sense  of urgency ahead of the 2009 COP in Copenhagen, which was billed as a ‘make or break’ moment, ended  in failure.

The negotiations limped along until 2012, when a Kyoto extension was eventually agreed. It included countries that represented only 15 per cent of global emissions.

With hopes for a universal, legally binding treaty fading, and the impacts of climate change already  taking their toll on communities around the world, the UN and supportive governments embarked on a different course. The emphasis would be on setting an ambitious goal and securing the buy-in – and participation – of all states by seeking non-binding, self-defined commitments.

Campaigners, including UNA-UK, were initially sceptical: could these so-called intended nationally determined contributions (INDCs) ever come close to achieving the deep reductions needed to limit global temperature rise to 2ºC – a level that would still pose a massive risk?

Yet over time, it became clear that this approach could bear fruit. The 2011 Durban conference saw states replace Kyoto’s two-track process with a universal one. Major players appeared to be actively working towards an agreement. In 2014, China and the US jointly announced their INDCs. India proposed a review process for verifying emissions.

Last tango in Paris
With promising pre-discussions within and outside  the UN process, COP21 in Paris was again billed as a ‘make or break’ moment. Many felt it was also the world’s last chance.

Success was by no means guaranteed. It rested not only on years of preparation, but on two weeks of tough negotiations, which saw world leaders, notably François Hollande and Barack Obama, repeatedly contact their peers to reach agreement.

The French used a mix of tools to seal the deal, building on the efforts of previous COP hosts such as Mexico and South Africa. They employed ‘confessionals’ – confidential places where delegates could speak privately and freely; ‘informal informals’ – which saw small groups of countries charged with ironing out specific parts of the draft text (sometimes as little as a paragraph); and ‘indabas’ – when groups of delegates met to tackle remaining areas of disagreement.

A ‘coalition of high ambition’, forged by small island states and later joined by the EU, United States and others, is also seen to have played a key role, not only in ensuring that goals, such as limiting global temperature rise to 1.5°C, were not forgotten but also in keeping states – progressive and reluctant – onside to reach the consensus needed.

What we got and didn’t get
These efforts prevailed. Adopted by 195 countries, the Paris Agreement commits, for the first time, all nations to take action towards the goal of limiting “the rise in global temperature to well below 2°C above pre-industrial levels”. It further calls on them “to  pursue efforts to limit the temperature increase to 1.5°C” – a positive progression from previous documents (although it is worth noting that based on estimates by NASA and others, some fear that we are already close to approaching or surpassing that target this year).1

The agreement also pays welcome attention to the need for increased monitoring and transparency. States have agreed to an “enhanced transparency framework for action and support”: a system through which progress on the INDCs of all countries, whether industrialised or developing, will be evaluated.

The first discussion on progress will take place in 2018, with a global stocktake scheduled for 2023. States are also required to submit new – and increasingly ambitious – reduction targets for emissions every five years, with a view to seeing global emissions peak as soon as possible, and then rapidly scaled down in the second half of the century.

However, the success of the new framework depends on whether the more vague provisions of the agreement – of which there are many – are translated into concrete action at the national and local level. For example, richer countries have pledged that by 2020, $100 billion will be made available to support developing countries each year, but this provision is only included in the preamble. The agreement has also been criticised for lacking specific emission targets, monetary commitments and penalties for non-compliance.

While it recognises the need to address “loss and damage” resulting from the negative effects of climate change, the language eventually agreed was weaker than many countries, particular those most vulnerable to climate change, had wanted. And only limited progress (the development of a task force) was made on preventing and tackling climate change-related displacement, which is likely to dwarf the current refugee crisis. According to the Internal Displacement Monitoring Centre, more than 26 million people are already displaced by disasters each year.

Most fundamentally, the agreement is not legally binding. INDCs are set by their countries and even if all those submitted to date were implemented, the global temperature would still rise by nearly 3°C.

As of 3 September 2016, the agreement had been ratified by just 26 states. With China and the US on board, ratifying states now account for over 39 per cent of global greenhouse gas emissions, but there is still some way to go to reach the threshold needed for the agreement to enter into force: ratification by at least 55 parties to the UNFCCC that represent at least 55 per cent of the world’s emissions.
But while the Paris Agreement – arguably the best deal that politics could get – may seem a far cry from the robust treaty that UNA-UK and others campaigned for, with concerted effort it could become the deal we need.

This publication brings together some 50 experts and practitioners, drawn from the UN, government, private sector, academia and civil society, to provide insights and recommendations on how to do so. It features case studies from countries, cities, businesses and NGOs that demonstrate how the agreement has already inspired and galvanised action.

It presents a range of solutions that are currently being developed and implemented, from nurturing national carbon sinks to improving renewable energy sources. And it discusses ways in which to ratchet up ambition, increase accountability and ensure long-term planning and support. This is vital if we are to achieve the global transformation required not only to protect life on Earth as we know it, but to ensure a better and more sustainable future for us all.

The Paris Agreement
Adopted by 195 countries in Paris on 12 December 2015, the agreement will come into force after 55 countries, accounting for at least 55 per cent of global GHG emissions, have ratified it