With the costs of generating renewable energy no longer prohibitive, what are the challenges for ramping up sustainable energy production? 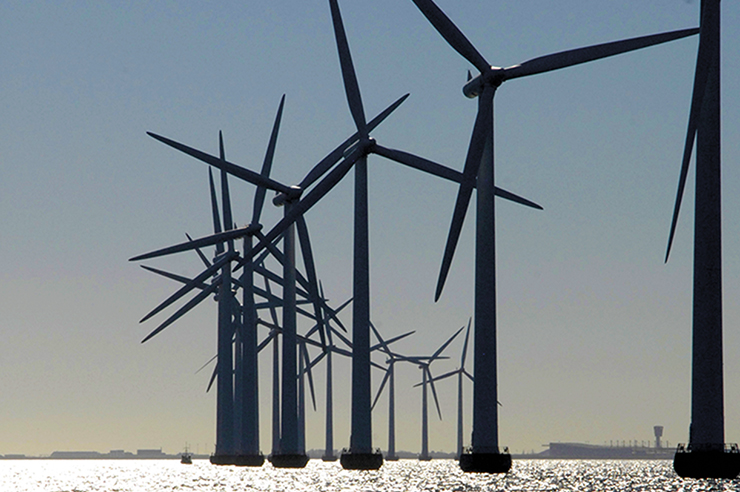 Wind turbines off Copenhagen. Denmark already gets 40% of its electricity from wind power.  © Francis Dean/Corbis via Getty Images

With the costs of generating renewable energy no longer prohibitive, what are the challenges for ramping up sustainable energy production?

Renewable resources have been the dominant sources of energy for most of human history, only being overtaken by fossil fuels since the Industrial Revolution. Wood and other biomass continue to be a major source of fuel in developing countries, but the Sustainable Development Goals (SDGs) aim to end this reliance. Large hydropower plays a major role in electricity generation in some countries, but is socially and environmentally controversial, with limited scope for expansion.

Other renewable resources provide only a small contribution to global primary energy – less than three per cent.1 However, in recent years that share has been expanding, with huge growth in investment in wind and solar photovoltaic (PV) power generation in particular.

Resource availability
Renewable energy resources are less concentrated than fossil fuels, but the global resource is very large. Most renewable energy ultimately derives from the solar radiation that falls on the Earth – and this is 7,500 times larger than current global energy demand. Taking account of realistic constraints, wind power could supply all global electricity needs and solar energy could supply the whole of energy demand.2 Technology and economics are the constraints, not resource availability.

Economics
Falling capital costs and improved efficiency have driven big reductions in renewable electricity costs, most notably in the past five years in solar PV. Costs are location-specific, as resources and the costs of installation and grid connection differ.

For example, the International Energy Agency (IEA) estimates the costs of wind power range from below $50 per megawatt hour (MWh) to over $150 per MWh.3 However, recent contract prices are in  the range $60 to $80 per MWh for new onshore wind, and $80 to $100 per MWh for large PV projects,4 placing these renewables in the same cost range as coal, gas and nuclear power.

While grid costs are additional, and may be higher for renewables, climate change and other external costs of the other options are often neglected. Overall, the perception that renewables are expensive is increasingly outdated. In some cases renewables are already competing for electricity contracts without subsidy.

Wind and solar did not exist on a commercial scale before the early 1990s. Both have consistently grown at 20 to 30 per cent annually throughout this century. Economies of scale in manufacture and installation, strong market competition and a host of technological advances have driven costs down. It is difficult to predict for how long such trends will continue, but there is little to suggest that they will end soon. Challenges other than cost are now more critical to the growth in use of renewables.

Grid integration
Integrating renewables with variable output into electricity systems is one such challenge. Integration problems are sometimes exaggerated: power systems have always accommodated variable loads, and variable generation poses similar management issues. The ability of power systems to incorporate variable generation itself varies, due to technical and institutional factors.

For example, in China, use of wind generation is constrained by both the limited capacity of the transmission grid and the administrative rules in electricity markets. Yet where systems are managed effectively, significant penetration of variable renewables can be achieved. For example, wind power already provides over 40 per cent of Danish electricity, and nearly 25 per cent in Ireland and Portugal.

Even higher levels of intermittency will pose challenges, however. The potential solutions are known: flexible generation, system interconnection, flexible demand (demand response), and electricity storage. Extensive use of flexible demand can only be enabled by smart grids. These are being deployed, but widespread adoption is a major challenge for the next decade.

Electricity storage at grid scale has traditionally been expensive and confined to large pumped hydropower schemes, but this is changing as some storage technology costs are falling in similar ways to those of solar PVs. Lithium ion battery costs have fallen by a factor of four in just eight years.5 They could soon reach $150 per kWh, at which point they are economic in many power systems. Other storage technologies might ultimately have even lower costs. Low-cost electricity storage is probably the key technical challenge for very high deployment of renewable electricity.

Heat and transport
If renewable electricity is to supply most of global energy, it will have to supply transport and heat, as well as the end uses traditionally dominated by electricity. Energy efficiency will be important in reducing the scale of energy demand, and biofuels may be able to play some role, although their use is constrained by concerns about competition for land.

Electrification of cars is increasingly attractive, driven by improved battery technology. But the decarbonisation of heat using renewable electricity looks likely to be more problematic for a variety of reasons, including the low cost of fossil fuels and the seasonal nature of much heat demand. Effective use of variable renewables for heating may require development of ‘power to gas’ technologies, i.e. the production  and use of hydrogen, or other gases’ fuels, from electricity.

Business models
Renewable resources are extensive and widely distributed, and therefore their use will affect energy markets. Interconnection between grids in different jurisdictions requires coordinated market rules. Decentralised renewables hugely increase the number of power generators. And effective use of demand response requires electricity users to be more than passive recipients of a commodity.

In current electricity markets, prices tend to be set by the fuel costs of the marginal generator, but this is not a viable market design where fuel costs are zero. Traditional business models are already facing these problems and this is reflected in the falling market value of some incumbent utilities. Innovation will be needed in market design and governance, as well as technical systems.

Economic development
Even where renewables are economic, they tend to have higher investment costs than electricity generation using fossil fuels. And major investments are needed in transport and buildings as part of the shift to zero-carbon energy systems. These increased investment needs are challenging everywhere, but particularly in developing economies.

The global climate regime will need to address the need for investment in sustainable energy in these countries, so that it does not prejudice other development goals. On the other hand, where there is currently limited access to electricity, renewables provide an opportunity for technology-leapfrogging, avoiding investment in the polluting and inefficient fossil-fuel systems characteristic of earlier development paths.

Developments in renewable energy technologies, smart grids and batteries look likely to enable a global energy system dominated by renewable energy. But public policy will be critical to this transition. The key agreements in Paris will need to be followed through: intended nationally determined contributions will have to be reviewed and increased, with further agreements to develop carbon pricing regimes, transfer key technologies and deliver the energy objectives of the SDGs.

At national and local levels, continued support for innovation and deployment of renewables and their enabling technologies remains essential. This transition to renewables in energy systems has implications for business models and markets, requiring continued policy innovation.