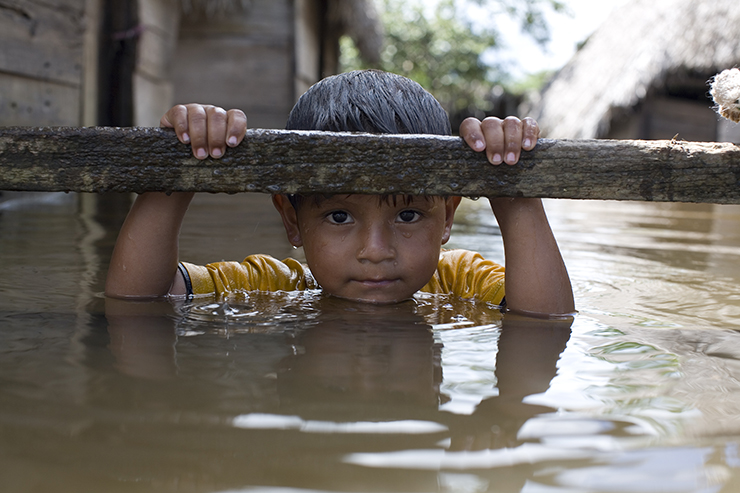 A small boy, in flood water up to his neck, holds on to a ledge outside his flooded home, in Nucleo 38 Village in the district of San Julian in Santa Cruz Department. [#2 IN SEQUENCE OF TWO]

By March 2008 in Bolivia, an estimated 97,000 families had been affected by extensive flooding throughout the country, the result of heavy rains that began in November 2007 and are linked to La NiÒa climate affects. Seventy-five people have died and more than 60,000 families have been displaced. The disaster hit some of the countryís poorest communities, damaging or destroying homes, schools, health facilities, roads and other vital infrastructure. In support of the Governmentís emergency response efforts, the United Nations has issued an inter-agency Flash Appeal for US $18.2 million ñ of which UNICEFís portion is US $1.79 million. Working with all partners, UNICEF is distributing water tanks, filters and other water-purification equipment; supporting supplementary feeding and latrine construction; and helping to provide tents and educational materials, furniture and reconstruction assistance. UNICEF is also supporting psychosocial services for children traumatized by the disaster and other child protection services in flood-affected communities.