Measurements: what and why?

Scientific measurements provide hard data about key climate change indicators such as global temperatures, greenhouse gas concentrations and sea levels. But what do they reveal about the causes of climate change, and how reliably can they help us predict the planet’s climate in the future? 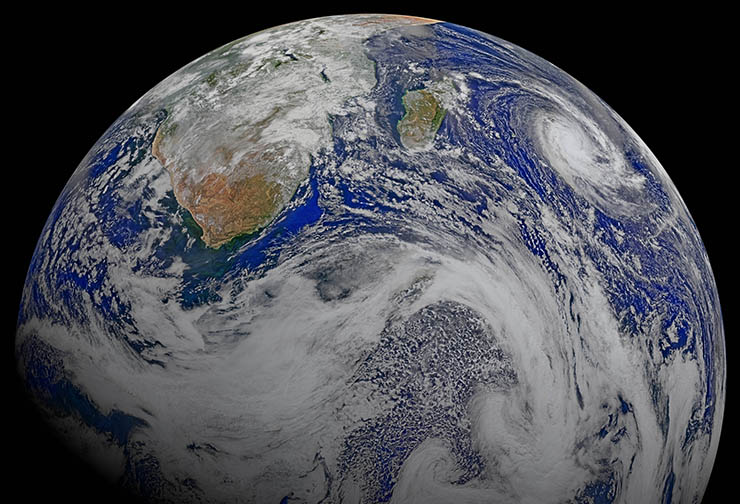 Measurements: what and why?

Scientific measurements provide hard data about key climate change indicators such as global temperatures, greenhouse gas concentrations and sea levels. But what do they reveal about the causes of climate change, and how reliably can they help us predict the planet’s climate in the future?

Observations of Earth made in the past three decades provide measurements with unprecedented quality and coverage that collectively synthesise how our environment is changing. Globally, the surface, lower atmosphere and upper ocean are warming; the middle atmosphere and upper atmosphere are cooling; sea level is rising; and Arctic sea ice is declining.

A combination of natural and human-made influences accounts for much of the measured variations in Earth’s temperature in recent decades, successfully capturing the lull in surface warming from 2001 to 2010 and the distinct differences between temperature variations at the surface and in the atmosphere at 20km. A projection using a mid-range scenario suggests that global surface temperatures may rise approximately 1ºC from 2015 to 2095.

Earth’s surface is our home and its temperature is the most widely used and longest directly observed indicator of how climate is changing. Removing the seasonal cycle from direct measurements and integrating measurements from around the globe produces records of global temperature residual variations that are traditionally called ‘anomalies’. Figure 1 shows global temperature anomalies of the surface, atmosphere and ocean during the past 36 years. Measurements also indicate that many other aspects of Earth are changing as surface temperatures increase. Figure 2 shows that Arctic sea ice area declined at a rate of 0.5×106 km² per decade and global sea level increased at a rate of 32mm per decade in the recent past.

Decoding natural and human-made influences
Earth’s changing global temperatures are the result of both natural and human-made influences, whose relative strengths differ for the surface, atmosphere and oceans. Natural influences include changes in the sun’s brightness, episodic injections of volcanic aerosols into the atmosphere and semi-regular fluctuations associated with the El Niño Southern Oscillation (ENSO) near the surface, the Quasi Biennial Oscillation in the atmosphere, and the Atlantic Meridional Oscillation in the ocean. Human-made influences include increasing concentrations of atmospheric greenhouse gases (GHGs, especially CO2), industrial aerosols and ozone-depleting substances, primarily chlorofluorocarbons. Figure 3 shows that appropriate combinations of natural and human-made influences (determined statistically from the measurements6) reproduce both the multi-year fluctuations and the overall trends in temperature at the surface and in the atmosphere in recent decades, including the lack of surface warming from 2001 to 2010.

On timescales of a few years, El Niños and volcanic eruptions produce episodic global surface warming of as much as 0.3ºC. A ‘super’ El Niño in 1998 caused that year to be the warmest on record until recently, whereas the El Chichón volcanic eruption mitigated the impact of a comparable El Niño in 1982. Although volcanic emissions cool the Earth’s surface, they warm the lower stratosphere. Also extracted from the measurements are changes of about 0.1ºC at the surface and 0.3ºC at 20km due to increasing solar brightness from the minimum to maximum of the sun’s 11-year activity cycle.

Natural influences cannot account for the overall trends in global temperature measurements in the past three decades, strongly implicating the presence of human-made influences. Increased GHGs warm the Earth’s surface because they trap infrared energy that the (solar-heated) Earth radiates to space. But increased GHGs cool the atmosphere above, because the much thinner overlying atmosphere allows the heat to escape. Thus, simultaneous global warming at the surface and cooling in the atmosphere near 20km from 1979 to 2014 is consistent with increasing concentrations of GHGs. The decline in 20km temperature also reflects contributions of changing ozone concentrations, affected by ozone-depleting substances. Northern hemisphere mid and high latitudes over land are warming faster than tropical and southern latitudes, and are likely to warm more in the future. This is evident in the regional patterns of the surface temperature anomalies in 2005 compared with those in 1955, shown in Figure 4. This is also evident in both the statistical projections of the measurements and physical model simulations of surface temperatures in 2095.

The projection of global surface temperature in Figure 4 includes a simulated solar brightness cycle (but not ENSO or volcanic aerosols scenarios), which modulates the overall warming trajectory very slightly. Should the Sun’s activity subside over the next century into a prolonged period of inactivity, such as occurred during the 17th century Maunder Minimum, solar brightness may decrease by more than has been measured in the past three decades. Current understanding nevertheless suggests that the resultant global surface cooling would be less than a few tenths of a degree Celsius, which is an order of magnitude smaller than the projected human-made warming.

A strong caveat for climate projections is emerging evidence from recent measurements that climate may now be changing more rapidly than physical models expect7, and in non-linear ways that statistical analysis of extant measurements (Figure 3) do not capture.

For example, whether summer sea ice disappears completely in the next few decades (as the measurements appear to suggest) or not until after 2050, as the physical models expect, may affect surface temperature projections in the next few decades. This is anticipated because open ocean exposed by Arctic sea ice summer melting absorbs more solar energy, reducing the equator–pole temperature difference and altering large-scale atmospheric dynamic features (for example, the polar vortex and the jet stream) that subsequently modulate surface temperatures over broad swathes of the northern hemisphere.8

Modelling the changes
Models that use numerical parameters to describe physical Earth processes and their responses to changing natural and human-made influences are a primary tool for understanding and forecasting climate change. The models’ most reliable products are arguably simulations and projections of global surface temperature on timescales dominated by increasing GHGs, albeit with tangible uncertainties because of the range of their sensitivities. The models project global surface temperature increases of 2ºC to 4.5ºC for doubled CO2 concentrations. Statistical analysis of the measurements suggests the corresponding warming is 2.3ºC.

Simulations and projections of regional surface temperature changes are less certain than for global values. This is in part because of difficulty in modelling latitudinal thermal gradients9 that control the dynamic motions that produce regional irregularities. In simulations such as that shown in Figure 4 of regional surface temperature changes for double CO2 concentrations, made by the NASA climate model GISS Model 3, rising GHG concentrations produce enhanced warming at high latitudes and over land, consistent with analysis of the measurements.

In the North Atlantic region, however, warming is minimal because a slower Atlantic Meridional Overturning Circulation reduces ocean transport of warm tropical water to higher latitudes. In contrast, statistical projections based on the surface temperature measurements, also shown in Figure 4, foresee more Northern Atlantic warming. This emphasises the importance of better understanding the projections of ocean circulation changes.

Physical models are less capable of simulating and forecasting climate change in the next decade than in the next century. This is because their representations of responses to shorter-term volcanic aerosol, solar irradiance and internal fluctuations are less robust than is their response to increasing GHGs. As a result, physical model simulations did not capture the observed lack of an upward trend in global surface temperature from 2001 to 2010, leading some to designate this decade as a hiatus in climate change.

The NCAR CCSM4 climate model,10 for example, overestimates the global warming due to GHGs and the cooling due to volcanic aerosols. It also underestimates the effect of solar brightness changes and is not able to reproduce actual ENSOs. Statistical analysis (Figure 3) suggests, however, that a combination of more La Niña (the opposite ENSO phase to El Niño) conditions and declining solar brightness countered much of the human-made warming in the decade from 2001 to 2010. In terms of statistical analysis of measurements, the so-called hiatus is not exceptional at all.

As ongoing Earth observations continue to extend the temporal coverage of measurements, and improved measurements become available, understanding of climate change will grow, attribution will become more certain, and validation of physical model simulations will improve their future capabilities.

Acknowledgements: The USA Office of Naval Research and NASA supported this work. Ongoing discussions with David Rind are appreciated.