Climate change is undeniable. Climate action is unstoppable. And climate solutions provide opportunities that are unmatchable 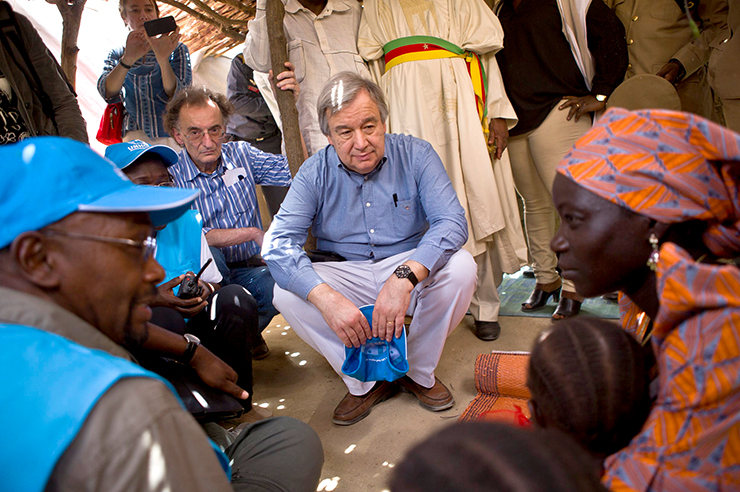 António Guterres listens to a Nigerian refugee in Cameroon. The effects of climate change on the Sahel, increasing competition for water and food, have led to displacement and conflict across the breadth of Africa.
© UNHCR/Helene Caux

Climate change is undeniable. Climate action is unstoppable. And climate solutions provide opportunities that are unmatchable

I have three granddaughters – the eldest is eight. I cannot imagine the world they will inhabit decades from now. But not knowing is no excuse for not acting to ensure that we do not undermine their future.

I want my grandchildren to inherit a healthy world, free of conflict and suffering – and a healthy planet, rooted in low-carbon sustainable solutions. That is my wish for everyone, everywhere.

To get there, we have our work cut out for us. Countries and communities everywhere are facing pressures that are being exacerbated by megatrends like population growth, urbanisation, food insecurity, water scarcity, massive movements of people – the list could go on. But one overriding megatrend is at the top of that list: climate change.

The moral imperative for action is clear. The people hit first and worst by climate change are the poor, the vulnerable and the marginalised. Women and girls will suffer as they are always the most disproportionately affected by disasters.

The nations that will face the most profound consequences are the least responsible for climate change and the least equipped to deal with it. Droughts and floods mean poverty will worsen, famines will spread and people will die.

As regions become unliveable, more and more people will be forced to move from degraded lands to cities and other nations. We see this already across North Africa and the Middle East. That is why there is also a compelling security case for climate action. Around the world, military strategists view climate change as a threat to global peace and security.

We are all aware of the political turmoil and societal tensions that have been generated by the mass movement of refugees. Imagine how many people are poised to become climate-displaced when their lands become unliveable. Last year, more than 24 million people in 118 countries and territories were displaced by natural disasters. That is three times as many as were displaced by conflict.

Climate change is also a menace to jobs, to property and to business. With wildfires, floods and other extreme weather events becoming more common, the economic costs are soaring. The insurance industry raised the alarm long ago. They have been joined by many others across the business community.

Climate action is gathering momentum not just because it is a necessity but also because it presents an opportunity – to forge a peaceful and sustainable future on a healthy planet.

This is why governments adopted the Paris Agreement in 2015. Today, over 160 states representing more than 80 per cent of greenhouse gas emissions have ratified the Agreement. Every month, more countries are translating their pledges into national climate action plans.

Not everyone will move at the same pace or with equal vigour. But if any government doubts the global will and need for this accord that is reason for all others to unite even further and build ever-broader coalitions. Indeed, all around the world, cities, regions, states and territories are adopting their own ambitious targets and reporting mechanisms.

Some may seek to portray the response to climate change as a fundamental threat to the economy. Yet what we are witnessing in these early years of a systemic response is the opposite: new industries, new markets and more jobs.

The real danger is not the threat to one’s economy that comes from acting. It is, instead, the risk to one’s economy by failing to act. The message is simple: the sustainability train has left the station. Get on board or get left behind. Those who fail to bet on the green economy will be living in a grey future. Those who embrace green technologies will set the gold standard for economic leadership in the 21st century.

In the US and China, new renewable energy jobs now outstrip those created in the oil and gas industries. Major oil producers are also seeing the future and diversifying their economies – Saudi Arabia has announced plans to install 700 megawatts of solar and wind power. And industry experts predict India’s solar capacity will double this year to 18 gigawatts.

The International Energy Agency has indicated that investing in energy efficiency could increase global economic output by $18 trillion dollars – more than the outputs of the US, Canada and Mexico combined. Future spending on energy infrastructure alone could total some $37 trillion dollars.

Now if that is the case, it is crucial for such massive investments to be sustainable and climate-friendly; otherwise, we will lock ourselves into bad practices for decades to come. Given the facts about youth unemployment, air pollution and climate change, surely it is common sense to put our investments where they will generate the most savings, create the most jobs, deliver the biggest health dividends and have the most impact against global warming.

That is why thousands of private corporations, including major oil and gas companies, are taking their own action. It is why some of the world’s most successful business leaders, entrepreneurs and venture capitalists plan to invest in a fund called Breakthrough Energy Ventures, led by Bill Gates, to reduce greenhouse gas emissions with clean energy technology. It is why the market for securities designed to benefit the environment is on track to double again this year. And it is why 60 per cent of the world’s 500 largest asset owners are taking steps to recognise the financial risks associated with climate change.

Science is speaking to us very clearly about what is happening. Innovation is showing us very clearly what can be done. If we want to protect forests and life on land, safeguard our oceans, create massive economic opportunities, prevent even more massive losses and improve the health and well-being of people and the planet, we have one simple option staring us in the face: climate action.
As UN Secretary-General, I am committed to mobilising the world to meet this challenge.

First, I will intensify high-level political engagement to raise the bar on climate action.

Second, I will rally the full capacity of the UN development system behind climate action, especially at the country-level because that is where true change will be achieved.

Third, I will use the convening power of the UN to work with all major actors to accelerate the necessary energy transition and promote the greening of investments in infrastructure and transport, as well as progress on carbon pricing, as more and more politicians, policy-makers and business actors are calling for a carbon price as the green economy’s missing link.

Fourth, I will work with countries to mobilise national and international resources to support mitigation, adaptation, resilience and the implementation of their national climate action plans. I will focus on strengthening resilience of the small island states and encourage developed countries to fulfil the pledges they have made – including for the Green Climate Fund.

And finally, I will encourage new and strengthened partnerships for implementing the Paris Agreement through North-South, South-South and triangular cooperation. I also intend to convene a climate summit in 2019 to make sure we reach the critical first review of Paris implementation with the strong wind of a green economy at our backs.

Climate change is an unprecedented and growing threat. The arguments for action are clear. So are the immense opportunities for peace and prosperity if we act quickly and decisively. All of us – governments, businesses, consumers – will have to make changes. This may not be easy at times. But for the sake of today’s and future generations, it is the path we must pursue.

A version of this article was delivered as a speech at New York University’s Stern School of Business on 30 May 2017.