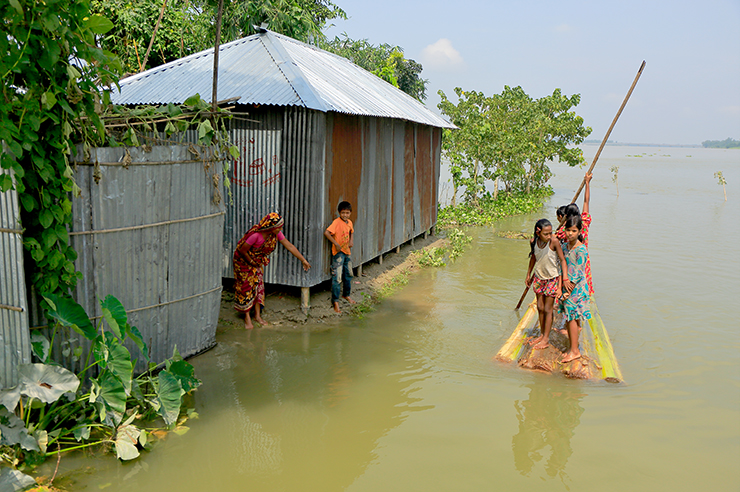 On 17 August 2017, people using a boat made out of a banana tree makes their way to a flood shelter in Kurigram District is located in the Rangpur Division, in Northern Bangladesh.

In August 2017, according to the Ministry of Disaster Management and Relief (MoDMR), an estimated 3.9 million people in 20 districts of Bangladesh have been affected by flooding, the second round of exceptionally heavy monsoon rains to hit the country. Flood barriers have been breached in Saidpur, Lalmonirhat, Dinajpur, Kurigram, Rajshahi and Badarganj. According to the Bangladesh Flood Forecast and Warning Centre (FFWC) 21 rivers are still flowing above the pre-established danger level, and the waters of the Brahmaputra-Jamuna and Ganges-Padma Rivers are still rising. Access to affected areas is challenging, as flooding in the north has made the railway inoperable and roads difficult to navigate, while the runway at Saidpur airport is at risk of being submerged.

As of 14 August, 89 people are known to have died, including at least 14 people in the last 24 hours. 1,392 shelters in flood-affected areas are currently sheltering more than 282,479 people. An estimated 1,000 schools in Districts of Lalmonirhat, Panchagarh, Nilphamari, Kurigram, Gaibandha, Bogra, Jamalpur, Tangail, Sunamganj and Sylhet have closed because they have been flooded or are being used as temporary shelters. An estimated 110,400 hectares of cultivated land have been affected. According to the Department of Public Health Engineering (DPHE), a total of 12,719 tube-wells have been submerged in Kurigram District alone leaving people without easy to access to potable water. Affected children and their families need temporary shelters, access to food and safe drinking water and sanitation.