No time for fatalism

The level of ambition formulated by current climate policies as part of the Paris Climate process falls woefully short of what is required to put us on a 1.5°C or 2°C pathway. However, the technology exists and many of the societal transformations are already taking place. Rather than fatalism, we can scale up our ambition both inside and outside the Paris process 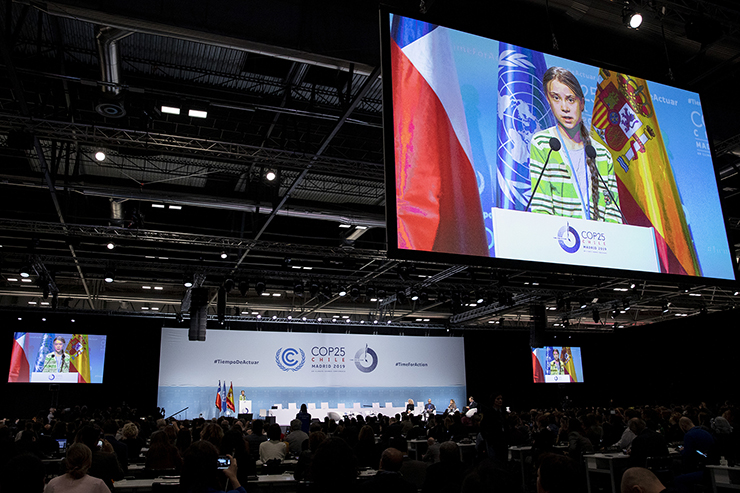 The plenary session at COP25 in Madrid, Spain. Greta Thunberg has played a major role in energising and giving a voice to grass-roots climate activism globally. © Pablo Blazquez Dominguez/Getty Images

No time for fatalism

The level of ambition formulated by current climate policies as part of the Paris Climate process falls woefully short of what is required to put us on a 1.5°C or 2°C pathway. However, the technology exists and many of the societal transformations are already taking place. Rather than fatalism, we can scale up our ambition both inside and outside the Paris process

The results from the intensive climate negotiations in Madrid (COP25) in December 2019 have been generally summarised as disappointing. This is despite the summit having a relatively modest agenda to begin with. The young climate activist Greta Thunberg, for instance, responded to the COP25 results by warning: “Our leaders are not behaving as though we were in an emergency.”

Clearly, a lot has happened since the Madrid climate summit, and the world is now facing the acute health crisis caused by COVID-19. But the long-term climate challenge still remains, and after Madrid a critical question is whether we have now indeed fallen critically behind the timeline for addressing the climate crisis.

In this context, we need to realise that COP25 was just one small step on the decarbonisation journey that will take several decades and was agreed on at Paris in 2015. Then, world leaders agreed to focus international climate policy on keeping the increase in global mean temperature to well below 2°C and, preferably, to within 1.5°C. The international community was able to achieve this consensus because the actual measures were left to voluntary contributions by individual countries (the nationally determined contributions or NDCs). This voluntary approach was chosen because of the previous experience of using binding targets: nearly impossible to set and impossible to enforce.

The two faces of Paris
This approach, however, has turned the Paris Agreement into a ‘Janus head’ – one with two different faces. On the one side, it sets a clear pathway and framework for international climate policy. More importantly, it serves as a source of inspiration for taking action – for countries, companies and individuals. On the other side, it is relatively toothless in its ability to enforce action.

It is hardly encouraging that, since 2015, global greenhouse gas (GHG) emissions have been increasing further – to a record high of 42 Gt CO2 in 2019. Clearly, the COVID-19 crisis will have a clear impact on emissions in 2020 – but without further action, it is not likely to lead to a more permanent transition. In that context, it is important to realise that the sum of all the submitted NDCs in 2019 were still projected to lead to an emission reduction well below what is needed to limit temperature rise to less than 2°C, let alone 1.5°C.

Model studies suggest that an optimal pathway towards implementing the Paris goals should be one that leads to a reduction in GHG emissions of at least 40 to 50 per cent by 2030, relative to the current trend (even with accepting the need for negative emissions in the long run). Yet all the NDCs combined only add up to a 17 per cent reduction in GHGs.

Even worse, the policies that countries are actually implementing seem to be barely sufficient to achieve a third of that 17 per cent. Five years on from Paris, it is clear that the policy community is scarcely on the way. But the world is already close to breaching the emission thresholds of the Paris targets, emitting about one half of the carbon budget for the 1.5°C target. At 2019 emission levels, we will exceed this carbon budget in the next 10 years. For the 2°C target, the budget is larger. But to achieve even that target, the world economy would need to become carbon-neutral within three to four decades.

The need for speed
The negotiators in Paris obviously foresaw that countries would not immediately put all their cards on the table and promise the most ambitious reductions. That is why they devised a process whereby every five years countries would be able to revise their promised contributions on the basis of scientific information. This process is called the ‘global stocktake’. However, the ongoing negotiations strongly suggest that the urgency of speeding up the stocktaking process is not high enough on world leaders’ list of priorities.

The science shows that the world must urgently cut global emissions from their current high levels from 2020 onwards – certainly for meeting the 1.5°C target but also for the 2°C pathway. Yet negotiators are slowly working towards a first stocktake only in 2023 to see whether the NDCs are compatible with achieving the global goals. There is also little to suggest from the negotiations that countries will massively increase their ambition levels in the new NDCs they submit this year or before 2023.

Building on recent achievements
Does this mean we must concede to fatalism? Clearly, that would not help, and I believe there is a better – and viable – path to take. Studies have shown that there are many possibilities for taking additional measures to reduce emissions within or outside the official UN process. For example, to avoid losing more time, countries could tighten up their emissions-reduction commitments as part of an ‘informal’ stocktake process running towards 2023.

Over the last decade, there have been notable successes that we can build upon. Technological progress has led to impressive cost reductions in renewable energy, as well as rapid improvements in electricity storage and electric vehicles. As a result, it is far easier now to imagine how we can decarbonise particular sectors for relatively little cost than it was, say, 10 years ago. And just as important is the dramatic increase in awareness of the need for action among citizens and companies. These two factors – technological progress and increased awareness – provide a clear platform for reducing emissions.

Achieving the Paris goals
In the longer term, we will need to realise a fundamental transformation of the energy system, as well as a deep reduction of land-based emissions. Model studies have shown that there are, in fact, multiple pathways that could lead to achieving this. These pathways are focused on rapidly increasing the efficiency of current energy use – in transport, industry and the built environment.

A second key element is that they must realise the potential of moving towards a carbon-free power system. This strategy can be combined with rapid electrification – as far as possible – in all end-use sectors: transport, heating and cooling, and some parts of industry. It will also be preferable to reduce non-CO2 sources of GHGs such as methane, nitrous oxide and particulate matter. Doing so will generate immediate benefits for both the climate and air quality.

Finally, the models show that, while some pathways are predicated upon long-term CO2 removal (for example, through massive reforestation), others rely on more rapid short-term action or lifestyle changes. For instance, moving consumption of meat towards levels consistent with health recommendations can be extremely effective in reducing non-CO2 emissions that are otherwise difficult to abate.

Taking everything together we see that it is possible to achieve substantial reductions in GHGs by 2030 and reach net-zero GHG emissions globally around 2050 – or earlier in most industrialised countries. The studies also show that although such transformation would require a major shift in investments, overall macro-economic costs (in terms of GDP) would be limited. In the long run, these costs would certainly outweigh the costs of climate impacts.

A call for front runners
As indicated in the introduction, it is clear that governments are now focused on the acute COVID-19 crisis. But the long-term challenges will also have to be addressed again at some point. This will not be easy, as clearly the economic consequences of the COVID-19 crisis will imply that many governments will have other priorities even if the health crisis is resolved.

At the same time, however, possible investment programmes to revive the economy could also form an opportunity if aligned with the Paris Agreement. And we can possibly also learn from some experiences in organising an effective response.

Implementing climate policy will require all parties to take a stand. But we know from the historic examples of renewable energy and electric mobility that sometimes it needs only a few front runners to start a trend. And, in fact, a considerable group of countries – including the UK, France and Germany – have already shown that they can reduce emissions while continuing economic growth.

The recent ambition of the new European Commission to present the European Green Deal could become another example of ‘taking a stand’. Although the target (50 per cent GHG reduction by 2030, climate-neutral by 2050) seems not sufficient for the goal of limiting the global temperature increase to 1.5°C, it does fit the 2°C target. The objective certainly conveys the required scale of transformation.

Pursuing and achieving this goal also has other benefits. It reduces EU dependence on fossil fuel imports from Russia and the Middle East. It reduces air pollution and provides an incentive for technological development. The leadership of a number of countries and other relevant actors such as industry and consumer groups – not at the negotiating table but through formulating and implementing policy – could yet make Paris a success.

The near future will be critical. Despite all short-term priorities, we cannot lose sight of the long-term future either. The need to take firm steps as part of a long-term transition remains as important as ever. Ideally, enough countries will have the courage of their convictions in the run-up to the new climate summit, in 2021 or as soon as possible. Steps are needed if we are to achieve the Paris goals within the agreed timeframe. There is indeed no time for fatalism.