Although carbon dioxide is the single-largest agent driving global warming, there are many others, many of which bring additional risks to health 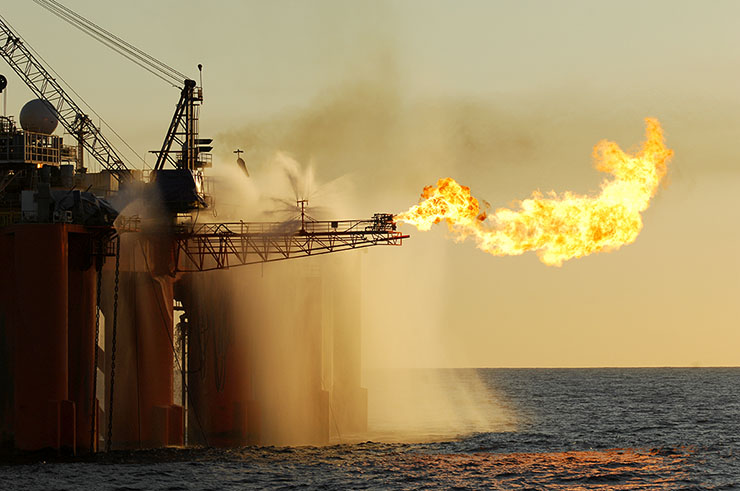 Methane flaring on an exploration rig. Methane is the second-largest driver of warming, and its atmospheric concentrations have been rising, largely due to increasing use of natural gas as a fuel  © Darryl Peroni/Getty Images

Although carbon dioxide is the single-largest agent driving global warming, there are many others, many of which bring additional risks to health

The Paris Agreement under the UN Framework Convention on Climate Change explicitly links the world’s climate and sustainability agendas. Signatories aim to hold “global average temperature to well below 2°C above pre-industrial levels” while taking into account the “intrinsic relationship that climate change actions, responses and impacts have with equitable access to sustainable development and eradication of poverty”.

Urgent action is clearly needed to achieve the climate goal, and the task is so challenging that the world needs to include all possible levers to slow warming. This means reducing emissions not only of carbon dioxide (CO2), but many other pollutants as well. Fortunately, addressing a broader portfolio of pollutants can provide cost savings and multiple sustainable development benefits.

Though CO2 is the largest single forcing agent, other compounds play a substantial role in driving climate change. Some, like nitrous oxide (N2O), are long-lived greenhouse gases (GHGs) similar to CO2 that persist for centuries. As fertilisers are a primary source of N2O emissions, it may be difficult to greatly decrease emissions while also providing food and energy for a growing population – though overuse of nitrogen fertilisers should certainly be reduced significantly.

Other large drivers of climate change are much shorter lived. This implies that reductions in their emissions cannot substitute for reductions in CO2, but also that benefits from such cuts would be fully realised very rapidly. Hence reductions in what are commonly referred to as the short-lived climate pollutants, or SLCPs, do not only complement CO2 reductions. By providing a rapid climate success story, they could also help catalyse greater action to reduce CO2 emissions.

Other drivers of climate change
Many SLCP reductions provide additional benefits through clean air. The second-largest driver of climate change to date is emissions of methane. According to the last assessment by the Intergovernmental Panel on Climate Change, in 2011 methane contributed about 55 to 60 per cent as much warming as CO2. Besides causing warming, methane enables formation of ground-level ozone, a component of smog that is toxic to both plants and people.

For people, the most recent analysis by my research group finds that current elevated ozone levels lead to about one million premature deaths worldwide each year. For plants, earlier studies have shown that application of current technology to limit methane emissions – especially leakage from the fossil-fuel sector and emissions from municipal waste – could lead to increases in staple crop yields of about 50 million tons per year. Hence methane reductions not only reduce warming, but lead to enormous benefits for public health, and large, readily quantifiable benefits for agriculture and forestry.

Most of these methane reduction measures provide benefits that in fact greatly outweigh their costs. Worryingly, methane concentrations in the atmosphere have increased rapidly during the past several years, even when CO2 emissions have not, with the rise largely attributed to increased use of natural gas (which is primarily made up of methane).

Current climate accounting systems are based on long-term climate impacts alone, thus undervaluing the near-term climate and health benefits of methane reduction. This may be contributing to the world’s poor record in controlling methane.

As well as methane, carbon monoxide and a group of compounds called volatile organic compounds also contribute to ozone in the lower atmosphere, and hence cause both warming and air pollution. These pollutants come from motor vehicles, inefficient burning, and evaporation of hydrocarbon-rich compounds such as solvents, petrol and paints.

Though less important than methane for climate, reductions in those emissions also lead to benefits for the world’s climate, public health and ecosystems. Implementation of the Kigali Amendment to the Montreal Protocol, which would keep emissions of the powerful hydrofluorocarbon GHGs from continuing to rise, is another key step to mitigate future non-CO2 warming.

The last major emitted compound driving warming is black carbon (soot) particles from incomplete combustion. These not only contribute to warming but are also part of the small particulate matter that, when inhaled, penetrates deeply into the body, leading to heart attacks, strokes and respiratory disease. The World Health Organization classifies air pollution (from particulate and from ozone) as the world’s leading environmental killer. Hence reductions in black carbon likewise contribute to both climate and health goals.

It is important to keep in mind that in most cases, CO2 reductions are also good for health as they are accompanied by decreases in co-emitted pollution. However, that type of pollution typically causes cooling, and so masks the full warming caused by GHGs. Hence the net climate impact of reductions of CO2 is likely to be small in the short term. This makes it all the more important to place controls on methane, black carbon, carbon monoxide and volatile organic compounds.

The Sustainable Development Goals (SDGs) have 2030 as their target date, well before peak warming will be reached. Though climate change is often (correctly) portrayed as a long-term problem, it is also an issue for the near term. Damages are already upon us, affecting the health and livelihoods of those alive today, especially the poorest, and limiting our ability to meet the SDGs.

Even as we pursue the world’s long-term warming target, the rapid increases in temperature that are projected to continue over the next few decades will damage human and natural systems. Some long-term impacts such as sea-level rise and glacier melting are influenced by cumulative warming and are thus sensitive to warming over all timescales. Portions of the polar ice sheets, meanwhile, may already be near irreversible temperature thresholds. Given these challenges, there is a clear need to mitigate climate change in the near term as well as in the long term.

Policymakers must realise that non-CO2 reductions are a crucial part of mitigating long-term and near-term climate change, and of improving human and ecosystem health. Explicitly accounting for the near-term benefits of reducing SLCPs would help incentivise action. Such accounting would also allow us to examine the pathway to the long-term climate target by quantifying the effects on societal wellbeing of the route taken.

Doing so would require reporting separately the emissions related to each pollutant that affects climate. All countries already disaggregate reporting on their current GHG emissions (but not all SLCPs) as part of their inventories submitted to the UN, but future pledges are combined into a single so-called ‘CO2-equivalent’ metric. As the various emissions are not equivalent, given their differing lifetimes and air quality impacts, separately specifying them and including all relevant emissions is key to facilitating pathway analyses. The Climate and Clean Air Coalition, which includes more than 60 nations plus additional non-state partners, has developed tools to allow the impacts along the pathway to the target to be analysed.

Emphasising the impact of emissions pledges on public health and sustainable development, as well as on climate change, could help build support for increasingly ambitious pledges. It would demonstrate to policymakers and citizens the local, near-term benefits they would reap in addition to the long-term worldwide climate benefits.