Earth’s natural carbon sinks – plants, soil, oceans and atmosphere – are facing major threats from climate change. What can  we do to protect them and promote their efficacy? 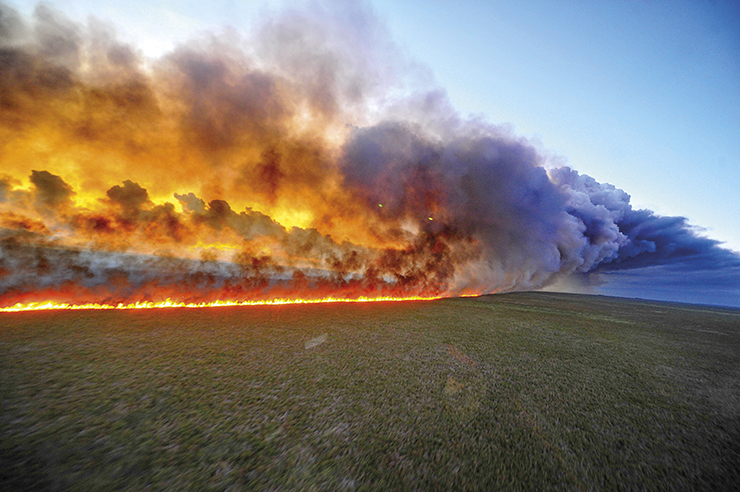 Taim Ecological Station on fire, in Rio Grande do Sul state, southern Brazil. South America is one of the regions most at risk of mass extinction.  © Lauro Alves/AFP/Getty Images

Earth’s natural carbon sinks – plants, soil, oceans and atmosphere – are facing major threats from climate change. What can  we do to protect them and promote their efficacy?

By nurturing natural sinks, can we compensate for the emissions of carbon dioxide (CO2) that are produced from the burning of carbon-based fuels? The amounts required are astounding. During the growing season (May to September), current annual global emissions of CO2 are larger than total net uptake by all forests, crops, grasslands, etc. in the Northern Hemisphere.

Furthermore, the largest portion returns to the atmosphere through respiration outside of the growing season – but not all of it. Global terrestrial ecosystems appear to sequester on average a few billion tonnes of carbon, or 10–20 per cent of global emissions, from fossil-fuel burning. (Note that one tonne of carbon equals 3.67 tonnes of CO2.)

This removal from the atmosphere lowers the amount of the Earth’s invisible infrared light that is intercepted by CO2, allowing it to continue through to space and thus cool the Earth somewhat, but the long-term prospects of this benefit are uncertain because the mechanisms are not well understood. We know that climate change depends on cumulative emissions of CO2 because the carbon that we extract from geologic reservoirs will not disappear from the ocean–atmosphere system for thousands of years.

Carbon storage (often called ‘sequestration’) in terrestrial ecosystems is vulnerable. Ecosystem succession, forced by climate change and direct human intervention, as well as fires, could return the carbon to the atmosphere. In other words, this form of carbon storage is not permanent – it will require ongoing human management.

Today’s large terrestrial carbon sink
The existence of a large terrestrial sink has been inferred from mass-balance arguments. We know how much coal, oil and natural gas we burn, and we know from very accurate measurements the fraction that remains in the atmosphere. The remainder must have entered the oceans and/or the terrestrial biosphere.

We have a reasonably good idea of the ‘excess’ CO2 that is now in the oceans, from our understanding of ocean chemistry and from measurements made throughout the oceans over several decades. That leaves a remainder that must be attributed to terrestrial ecosystems, which include organisms and organic matter in soils, the carbon content of which is hard to measure directly (Figure 1). This remainder includes both positive emissions from biomass burning and negative emissions from  uptake elsewhere.

Since CO2 is one of the important plant nutrients, it has been postulated that its ongoing increase is fertilising additional growth, an effect observed under optimised conditions in greenhouses. However, it is widely recognised that outside of greenhouses, the enhanced growth can be limited by many other factors such as temperature and humidity, soil moisture and shortages of the major nutrients nitrogen, phosphorous and potassium. It can also  be limited by trace nutrients (such as zinc, iron, etc.) that are required for active sites  in enzymes.

Experiments of CO2 enrichment of outside air, by releasing pure CO2 at controlled rates, have had mixed results. Globally, the amount of reactive nitrogen that is available to terrestrial ecosystems has been approximately doubled, primarily through the industrial production of nitrogen fertiliser and from acid rain deposited far from its fossil-fuel combustion sources.

Global biogeochemical models try to incorporate the effects of these co-limiting factors to varying degrees, but it remains hard to validate the models. Recently, Terrer and co-workers discovered that symbiotic relationships between plant roots and fungi (called mycorrhizae) in forest soils alleviate the nitrogen limitation, allowing for sustained CO2 fertilisation at temperate and high latitudes.1

We need to understand the unintended fertilisation effects mentioned above because they are very large and they could potentially stop once the CO2 increase first slows down and then starts to decrease. A portion of the sequestered carbon would likely then be biologically consumed, returning as CO2 to the atmosphere.

Deliberate sequestration
Planting new forests on currently ‘marginal’ lands or restoring destroyed forests is one option. It would compete with other land use, like food production and urbanisation. Switching from conventional to conservation tillage or no-till agriculture would better preserve soil organic matter. Adding biochar to soil can preserve organic carbon while also improving water and nutrient retention.

This is, of course, far from an exhaustive list, but the potential carbon storage per year in each of these appears to be small relative to the unintended fertilisation that has been underway already for a few decades. Deliberate carbon sequestration would have to be incorporated into present land use that would otherwise compete for space: for example, producing food in such a way that soil organic matter is enhanced instead of depleted. However, there are many other compelling reasons to nurture our ecosystems and soils vastly better than we currently do.

Biological mass extinctions
The great biologist Edward O. Wilson presents overwhelming evidence that human civilisation is in the middle of causing the sixth great mass extinction in the last half billion years of Earth’s history.2

The risks for future generations associated with a massive reconfiguration of ecosystems containing far fewer individual species are probably even larger than the risks stemming from climate change itself. In fact, climate change and ocean acidification significantly increase the risks of mass extinctions both on land and in the oceans.

Wilson acknowledges that our understanding of the interactions of species in ecosystems is still in its infancy. He states that: “At least two-thirds of the species on Earth remain unknown and unnamed, and of the one-third known, fewer than one in a thousand have been subject to intensive biological research”.

Because of this vast lack of knowledge, he proposes that we set aside half of all land and half of all oceans as a nature preserve, off limits to human exploitation.
Currently, about 15 per cent of land and three per cent of ocean area has been set aside that way, in patchwork fashion, as National Parks, etc. In other words, the best ‘nurture’ strategy would be to leave half of the Earth alone. Even then, the designated wilderness half of the Earth would still experience high greenhouse gases, chemical air and water pollution (including plastic waste slowly degrading into microparticles), invasive species from the other half, and climate change.

Revised economic priorities
Our current economic system has greatly improved the material living standards of perhaps two to three billion people, but it has also set a trap for us. The maximisation of gross domestic product (GDP) has become the standard of success. Unfortunately, it only measures the rate of throughput of goods and services that are being paid for. It does not measure wealth, either of natural ecosystems or man-made infrastructure. Deforestation through logging or replacing tropical forest with palm oil plantations increases GDP, but there is no accounting of the wealth that is lost, much of it forever.

The evolving facts of climate change and mass extinction demonstrate that the throughput of goods needs to decrease drastically: we need to stop the one-way production of throwaway goods. In a ‘circular’ economy, all waste is a resource to be tapped. Throwing things away merits a tax, probably paid up front.

In a broader sense we need to figure out a new economic system that can provide for the common good, namely housing, food, healthcare, employment, equality, security, individual freedom and education, without always having to grow in order to function.

Our financial system depends on debt, for which interest needs to be paid, which in turn demands growth so that we can all pay our loans. In addition, unless corrected, this system also inherently fosters growing inequality because most of us are always paying interest to those who have much more than they can ever consume. Zero interest is perhaps one of the pillars of a new economy.
For the immediate future, it would be a start if new alternative measures of economic success would be introduced, first alongside GDP, and then gradually replacing it as being more relevant to human welfare.

Figure 1. Recent mass balance of the global carbon cycle
The observed (ice cores and atmosphere) atmospheric history is used to estimate ocean uptake with a simple empirical pulse response ocean carbon model.3 A few model parameters have been set such that the ocean increase of CO2 since pre-industrial times, observed during the World Ocean Circulation Experiment/Joint Global Ocean Flux Study during the 1990s,4 is reproduced, as well as the rate of increase of the ocean storage of excess CO2 during 1990–2010, inferred from minute changes in the O2/N2 ratio observed in the atmosphere.5 Upper panel: Total CO2 injection is the sum of the observed rate of atmospheric increase plus the amount that is calculated to enter the oceans. It is the sum of fossil-fuel emissions and net emissions from the terrestrial biosphere (there is no other substantial source).

Lower panel: When the fossil-fuel contribution is subtracted from the total CO2 injection, the net terrestrial emissions turn out to be mostly negative (meaning net uptake by terrestrial ecosystems) since the middle of the 20th century.