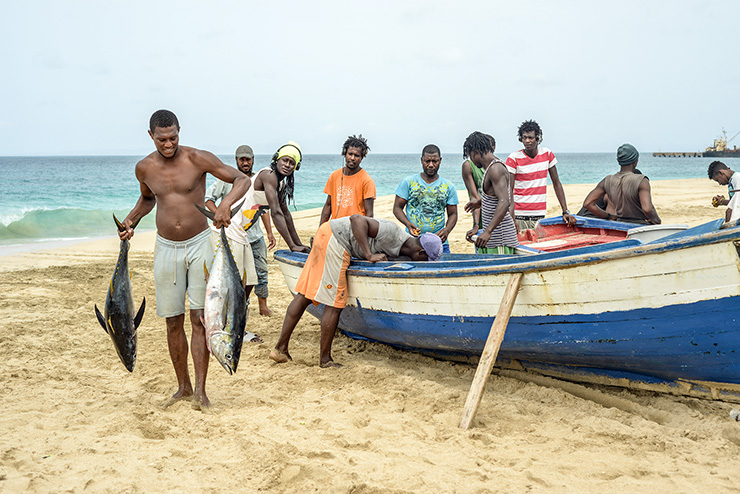 Fisherman unload their catch on Maio Island, Cape Verde. The island is part of one of the country’s several Marine Protected Areas, which are at the core of its sustainable development plans. © Andia/Universal Images Group via Getty Images

The global ocean and climate are inextricably linked. The ocean serves as a central component of the climate system, vital to global exchange and redistribution of heat, water, gases, particles and momentum. The ocean also plays a fundamental role in mitigating climate change by serving as one of the planet’s main heat and carbon sinks.

Anthropogenically created greenhouse gas (GHG) emissions are increasingly altering the ocean’s chemistry. We are witness to deoxygenation and acidification of the ocean, warming ocean temperatures, rising sea levels, shifting currents and increasing weather volatility, all with deleterious consequences for nature and humanity’s place within it.

If left to cascade forward on its present trajectory, climate change is expected to cause decreased ocean productivity, altering food web dynamics, shifting species distribution, and leading to greater incidence of disease. Thus, as we learn more about the consequences of climate change, the interrelationship between it and the ocean must be acknowledged, understood and incorporated into governmental policies.

Ocean acidification
The ocean is acidifying because it is absorbing more carbon dioxide, which affects the pH of the water. Since the start of the industrial age, carbon dioxide levels in the atmosphere have been steadily increasing, with commensurate increases in the ocean’s absorption of this gas.

The effects of ocean acidification are many. For shellfish, crustaceans and coral that rely on carbonate ions to build their shells and skeletons, survival becomes very much more difficult. Since humans and sea creatures alike rely on such lifeforms for their sustenance and in some cases their survival, ocean acidification will have serious consequences for coastal ecosystems and human communities.

To combat ocean acidification, the reduction of humanity’s overall carbon footprint and the urgent reduction of our GHG emissions must be a high priority for all governments if the best interests of their citizens are to be protected.

Adaptation depends on mitigation
The advice of the Intergovernmental Panel on Climate Change (IPCC) is that climate resilience depends on combining mitigation and adaptation. Since mitigation reduces the rate as well as the magnitude of warming, it also increases the time available for adaptation to climate change.

It is important to appreciate that delaying mitigation reduces our options for both mitigation and adaptation in the future. Successful future adaptation is therefore heavily dependent on there being no further delays in our application of effective mitigation measures. We see here once again why the governments of the world, particularly the major emitters, have a responsibility to present nationally determined contributions (NDCs) at COP26 that demonstrate greatly enhanced ambition to lower GHG emissions.

The ocean’s mitigation role
Ocean-based climate action can play a major role in reducing the world’s carbon footprint. It can deliver up to 21 per cent of the annual GHG emission cuts pledged under the Paris Agreement.

The 2019 report of the UN Secretary-General’s Climate Action Summit highlighted the relationship between the ocean and climate change. In this regard, it presented areas of positive opportunity, including ocean-based renewable energy, transportation, carbon storage, aquaculture and dietary shifts, along with carbon storage.

The role of ‘blue carbon’ in the long-term sequestration and storage of carbon is one of the ocean’s vital contributions to mitigation. As much as 7 per cent of carbon dioxide reductions required to keep atmospheric concentrations below 450 parts per million can be achieved by protecting and restoring our natural coastal and marine ecosystems. Let us henceforth place meaningful attention on the true value of salt marshes, mangroves, wetlands, seagrass meadows, kelp forests and seafloors.

Too often the contribution of these ecosystems towards the capture and storage of carbon dioxide is taken for granted. If only for the hugely positive mitigation role they play, and in the face of continuing global degradation of such natural habitats, governments and the international community must give high priority to the conservation and restoration of these natural assets.

With the growing global acknowledgement of the scale of blue carbon’s hugely positive mitigation role comes greater realisation of the predicament we face. For even as we realise that blue carbon is among the most efficient of carbon sinks, we find these natural assets are among the fastest-disappearing ecosystems on the planet. At the same time as we are quantifying the crucial services blue carbon provides through food security, water quality, shoreline protection and maritime employment, we are witness to the grand scale of these assets’ destruction.

Degradation of these vital ecosystems is caused by unsustainable use of natural resources, poor watershed management, damaging coastal development practices, and woeful sewage and waste management. Their loss is bad news for carbon sequestration, human health, food security and economic development. Thus, as one of the biggest gaps in the effort to mitigate climate change, the approach to COP26 must witness governments around the world rising in defence of blue carbon.

We must invest in the ocean’s health
As has often been said, it is not possible to have a healthy planetary ecosystem without a healthy ocean ecosystem, and at present the ocean’s health is in decline. Our great challenge is to reverse this cycle of decline and restore good health through good practice. Part of the necessary action must be investment in the restoration and protection of our natural assets of blue carbon.

In the same vein, the deep ocean is often overlooked in consideration of climate change and the necessities of mitigation. It is therefore incumbent upon us to fully research and understand the role of the deep ocean and its seafloor, particularly before any new action is taken to disturb it. The time has come for this responsibility, which may emerge as a vital element in the mitigation of climate change, and therefore be one of universal importance to us all. It must be considered by all governments in the context of COP26 and in ocean–climate actions thereafter.

Hope for the Decade of Ocean Science
The IPCC has warned us that unless ambition and action are accelerated worldwide, we are on a trajectory that leads us all towards a potentially disastrous environmental crisis for nature and our species.

The role of the ocean in mitigating such disaster is finally being appreciated. But we need to know much more about the ocean’s biome and its contribution to the planetary ecosystem before we start making decisions about it that will affect the future of humankind. It is for this reason that we should all support the UN Decade of Ocean Science for Sustainable Development. The Decade gets underway next year.

2020 is the start of the second ambition cycle of the Paris Agreement. At COP25, the Subsidiary Body for Scientific and Technological Advice (SBSTA) was asked to convene a dialogue on ocean and climate change to consider how to strengthen mitigation and adaptation action. Following on from the ‘Blue COP’ efforts of COP25, the SBSTA meeting will provide us with a great opportunity to ramp up our understanding of the central role of the ocean–climate nexus.

Our very survival as a species may depend on this understanding being respected and acted upon through the mitigation efforts of governments and the global community as a whole. So once again I say, “All hands on deck!”