How have human-made carbon emissions altered the chemical balance of the atmosphere and oceans? Are we reaching a planetary tipping point? 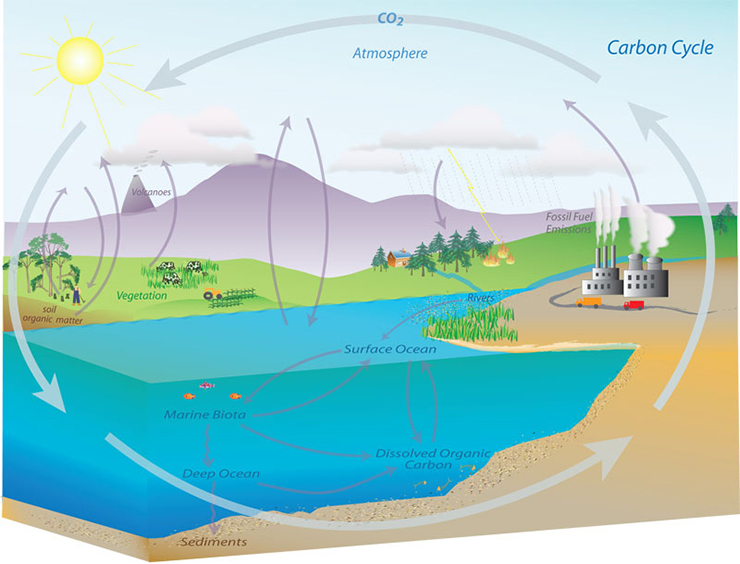 How have human-made carbon emissions altered the chemical balance of the atmosphere and oceans? Are we reaching a planetary tipping point?

The Keeling Curve, the iconic record of atmospheric carbon dioxide (CO2) measured at the Mauna Loa Observatory (Figure 1) reveals a stunning fact. It shows the annual cycle, caused by net uptake of CO2 by terrestrial ecosystems in the northern hemisphere during the growing season, and approximately the same amount of carbon released back to the atmosphere through respiration of plants and soils during the rest of the year. The peak-to-trough amplitude was about six parts per million (ppm) in the early part of the record and is now typically about seven ppm. It takes the removal of approximately seven billion tonnes of carbon (the same as 25.7 billion tonnes of CO2) to lower CO2 in the entire hemisphere by seven ppm. Currently all global emissions from the burning of coal, oil and natural gas, and from cement production, amount to 10 billion tonnes per year, more than the net seasonal uptake by all crops, forests, grasslands and tundra combined.

It should therefore be no surprise that the most striking feature of the Keeling Curve is the overall increase, accelerating from about 0.7 ppm per year in the early years to slightly over two ppm per year today. Half of all fossil-fuel emissions since pre-industrial times have taken place since 1988. There were large ups and downs of CO2 during ice ages and warm interglacial periods over the last 800,000 years.

Figure 2 shows the transition that has been measured in the greatest detail in ice cores from the last glacial period to the Holocene, the warm period we are in today. It took natural processes 6,000 years to increase CO2 by 80 ppm, in two steps. The most rapid rates of increase during these steps were 0.019 and 0.026 ppm per year. Today’s annual rise of two ppm is an explosion compared to natural processes. If all annual emissions could somehow be confined to a layer of pure CO2 covering the surface of the entire Earth, that layer would be four centimetres thick.

Oceans
CO2 emitted from anywhere will spread to everywhere in the atmosphere in about one year. The rate of increase in the atmosphere has been about half as much as global emissions from burning fossil fuels. The other half has entered the oceans and the terrestrial biosphere in roughly equal proportions. CO2 is a water-soluble acid.

The sum of these three components, which are always in chemical equilibrium, is called total dissolved inorganic carbon (DIC). There is about 60 times more carbon as DIC in the oceans than as CO2 in the atmosphere.

However, when additional CO2 is added to the coupled atmosphere-ocean system the chemical equilibria shift in such a way that, when a new equilibrium is reached, the oceans store six times more of the added carbon than the atmosphere – or ten times less than a naïve expectation of 60 times more. Figure 3 shows the fate of past emissions, based on a basic mass-balance model. At this point we have burned about 400 billion tonnes of carbon. Plotted are cumulative actual emissions until today. Starting from an initial steady state, a simple model of ocean uptake estimates how much carbon the changing atmosphere forces into (or pulls out of) the oceans.

Mass balance is provided by the terrestrial biosphere – the sum of the changes in the atmosphere, oceans and terrestrial ecosystems always equals cumulative industrial emissions (which remain near zero until the 19th century). One can see that atmospheric CO2 was a little lower starting in 1600, during what is called the Little Ice Age.

In the following decades the changes accelerated. The terrestrial biosphere lost carbon due to deforestation and other land use change during the 19th and first half of the 20th century. After the mid-20th century, terrestrial ecosystems became a net absorber of carbon, more than counteracting still ongoing deforestation.

Longevity of the emissions
The timescale of the human-caused CO2 enhancement is of the order of several thousand years. That is how long it takes for dissolution of calcium/magnesium carbonate sediments on the ocean floor to neutralise the acid CO2. After that time the enhancement is still present in the oceans but no longer in the atmosphere, and the ocean acidification has been reversed. There are two immediate implications. The CO2 enhancement remains in the atmosphere and oceans ‘forever’, at least compared to the timescale of most civilisations, if we let nature take its course. Also, over centuries, the climate forcing by CO2 depends primarily on the total cumulative emissions, not on how rapidly or slowly they occur.

Future climate forcing resulting from human activities depends primarily on cumulative CO2 emissions. This is because it has been the most important greenhouse gas so far and it has one of the longest lifespans of all greenhouse gases.

An illustration of a plausible future, using the same mass-balance model, is sketched in Figure 4. It assumes that cumulative emissions end up being 1,000 billion tonnes of carbon. The future emissions are assumed to take place according to a logistic function that assumes that reserves gradually become more dilute and harder to extract, requiring more and more energy and financing per tonne extracted.

It is quite likely that wars also play a large role, and that renewable energy sources will take over. If we also assume, for clarity, that the terrestrial biosphere remains constant from 2015 on, the oceans will hold about 80 per cent of the emissions and the atmosphere 20 per cent in the year 2500. The atmosphere and ocean will have chemically equilibrated when the respective fractions are 85.7 per cent and 14.3 per cent respectively, which follows from the chemical equilibrium outlined above.

Carbon cycle management
Suppose we remove 100 billion tonnes of carbon from the emissions, either by not emitting that CO2 in the first place, or by pulling it out of the atmosphere (which requires a lot of energy) and storing it in geological formations, or by letting plants pull it out, storing it as organic matter in plants and soils. We assume that this happens as one billion tonnes every year from 2010 to 2110. The impact on the atmosphere and oceans is shown as the dashed lines in Figure 4. The total amount would correspond to a decrease of 47 ppm in the atmosphere, but eventually only about one seventh of that will remain because the oceans will hold six sevenths of the cumulative negative emissions, the same proportion as for the positive emissions.

Some conclusions
Human impact dominates the contemporary carbon cycle. Land use change, the second largest contribution, is currently estimated to emit one billion tonnes of carbon per year, about one tenth of that from fossil fuels. Future scenarios of climate forcing are also dominated by the total amount of fossil fuels we end up burning. Any carbon mitigation strategy has to compensate for all cumulative CO2 emissions, not just the portion that resides in the atmosphere.

Given the enormous scale and the long-term commitment to climate change, I would say there is no way around committing very large resources to tackle the emissions as vigorously and as soon  as possible.