The summit’s decisions will determine whether people live or die. The rich world must take responsibility and enable developing countries to implement  the low-carbon solutions the world needs. 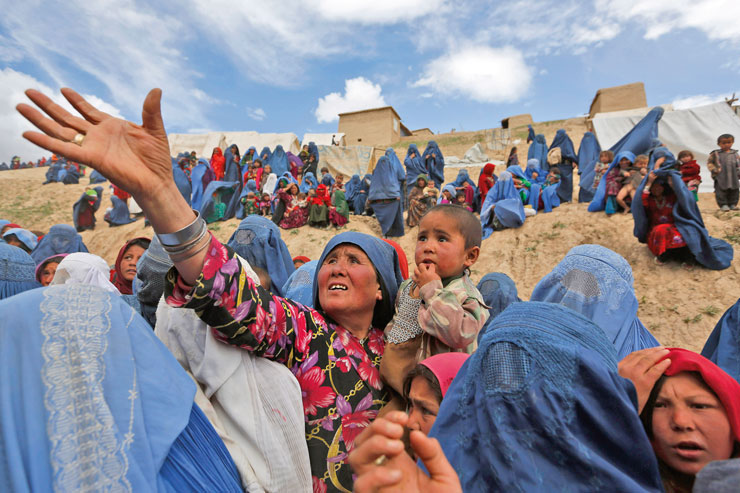 Displaced Afghans wait for aid in the remote, mountainous province of Badakhshan, May 2014, after landslides buried their village under up to 50 metres of earth and debris.  © Mohammad Ismail/Reuters

The summit’s decisions will determine whether people live or die. The rich world must take responsibility and enable developing countries to implement  the low-carbon solutions the world needs.

By the end of 2015, the Paris climate summit will be over. Big decisions will be taken – or avoided – by those with political power. Those decisions, or lack of decisions, will determine whether people will live or people will die. So Paris matters. And as a result, what we all do between now and then also matters.

This article sets out how progressive citizens, companies, civil society organisations and policy-makers can work together to mobilise global political will, so that Paris can live up to its potential. I will not dwell on the details of the climate challenge – they are set out elsewhere in this publication. But in summary, we need to do two things.

Firstly, we must restore our atmosphere’s equilibrium by achieving substantial and sustained cuts in greenhouse gas emissions. And secondly, we must repair the damage already caused by climate change, and build defences against the damage which will be caused in the years ahead because we didn’t act earlier.

In both cases, the actions of individuals, companies and communities can make a positive difference. But to catalyse action at the scale and pace that the scientific evidence tells us is required, we need global political leadership to change the deeply embedded, day-to-day economic realities that still support a polluting path to prosperity.

Mobilising political will
At a global level, it is easy to set out what that political leadership needs to achieve. We know that human-induced climate change has six main causes: dirty energy, dirty transportation, polluting industrial practices, deforestation, unsustainable agriculture and bad waste management.

We have solutions to address all these root causes – and for many years, we have known that the costs of inaction will greatly outweigh any costs from action. Similarly, anyone with a basic sense of morality or justice knows that the world must act to prevent the death, pain and economic damage that is occurring with increasing frequency across the world as a result of extreme climatic events.

The people impacted by the devastating floods in Malawi, or the droughts in Colombia, the communities still rebuilding after typhoon Haiyan in the Philippines or hurricane Sandy in New Jersey in the United States and many millions more besides can all bear witness to the immense human pain caused by extreme events. In all cases, the poorest and most vulnerable suffer the most – anybody who cares about that suffering knows that they are compelled to act. So at a global level, the rationale for action is clear.

But it is unlikely that simply repeating the global rationale all the way to Paris will generate sufficient political will to act. Perhaps this is because the global rationale, though useful as a guide, falls short of a genuine understanding of the varied nature of political leadership required across the world. In particular, it fails to internalise the enormity of the task that is being asked of developing countries, and addressing this is key to success in Paris.

To place this view in context: the domestic challenge for today’s developed countries, who are the historic emitters, is clear. They need to sustain their social and economic development, while cleaning up from the consequences of over a century of development that has been coupled with greenhouse gas emissions. That means finding a way to peak, and then reduce, emissions.

It is encouraging to see the United Kingdom, the rest of the European Union and others providing global leadership by enshrining these objectives in national and regional laws and policies. But citizens and leaders of developing countries face the greater challenge – they are being asked to create a form of equitable prosperity that has never been achieved in history.

It is no coincidence that the world’s richest countries are the world’s biggest emitters per capita. Despite the scientific need to keep global per capita emissions to below two tonnes of carbon dioxide, the world’s wealthy countries emit between 8 and 16 tonnes per capita. Newly industrialising countries are striving to avoid reaching similar levels. Some are not going to be able to do this.

But the world needs them, and developing countries more broadly, to tread a path that has never been trodden before – to become prosperous, realise their legitimate right to development and stay at low levels of greenhouse gas emissions. It is therefore reasonable for many developing country leaders to say that expecting them to achieve low emissions levels is effectively asking them to forego a proven model of development.

It is also understandable that they say they will only act after they have seen the historic emitters act in accordance with science in a way that few have done to date, or that they point out that many developing countries are already doing more than much of the developed world to create low-carbon economies. These are all legitimate viewpoints.

Yet, the paradox is that the world needs emerging and developing countries to lead the way in pioneering a new, sustainable development paradigm. This is because most of the energy supply, buildings and transport infrastructure that has yet to be built will be in Africa, Asia and Latin America. Most of the supply of nutritious food to feed an ever-more prosperous and populous world will come from the same places. And the world’s major forests – including the Amazon, Congo Basin and the forests of South East Asia – are in exactly the same regions.

So we have a reality where the rich world, which did most to cause the climate problem, now has to enable emerging and developing economies to implement the low-carbon solutions that will benefit us all. If political will is to be mobilised in the developing world, it needs to be grounded in this reality – and the consequent challenge that unprecedented international co-operation is needed to create a fairer enabling environment for developing countries who are prepared to act.

First of all, recognising that everyone needs developing country leadership can change the dynamic where people, mostly in the developed world, think that they can ‘pressurise’ developing countries to act. Instead, a greater posture of humility might create the space to listen to the solutions that are emerging from the citizens, communities, businesses and governments of the developing world. Instead of relying solely on a global rationale and theoretical blueprints, home-grown solutions – including those that require international support – can be put on the table and discussed.

Secondly, if those involved listen to the views of the developing world and understand their needs, then the role of climate finance can be properly understood. Finance and the related area of technology transfer have been very difficult issues in the international climate negotiations for years. They are frequently mis-characterised as an expectation of charity from those too poor to act.

But if we share a collective need to avert catastrophic climate change, then climate finance is a practical manifestation, not of aid or charity, but of enlightened self-interest. In this paradigm, climate action happens in both the developed and the developing world, with the necessary financial and technological support coming from the developed world to the developing world.

These financial flows are needed to enable developing countries to catalyse further finances to invest heavily in new economic models, to spend significant amounts of money to protect vulnerable citizens and communities, and to make their societies and economies resilient to the climate change that can no longer be averted. The UN Framework Convention on Climate Change provides the platform for advancing this international cooperation – and the French Government, as hosts of the Paris climate meeting, have been impressive in their recognition of the need for all countries to be encouraged to lead instead of pressurised to follow.

Foreign Minister Laurent Fabius has also repeatedly emphasised the need for a mature discussion about the approach to climate finance. So the possibility of using the road to Paris to mobilise political will is there. However, this possibility will only be realised if concerned citizens, organisations and businesses from across the world work to build informed, respectful partnerships with those who are willing to lead.

Empowering the individual If this seems challenging, then perhaps it is worth remembering that despite all the abstract jargon, what we are talking about is not just the political will to address climate change. We are also talking about creating an unprecedented wave of human empowerment to combat global poverty and inequality. Because when you strip away the jargon, you see that what climate action means in a practical sense is recognising that there is no solution to climate change if up to three billion people still cook using dangerous and dirty energy sources, with women disproportionally burdened by this energy poverty.

There is no climate solution if the communities of forest countries are unable to work with others to protect their forests, or if smallholder farmers are not supported to find ways to move to sustainable practices. There is no solution if the hundreds of millions of people living in slums across the world cannot get access to affordable, sustainable food and energy. There are many more examples – but the central point is that international cooperation can mobilise more than just the political will to address climate change. It can also empower billions of people across the developing world, and unleash the human energy, perspectives and ideas to create a fairer, better world for all.

The human rights framing for a new path to development is set out in the Universal Declaration of Human Rights which states, in Article 28 that: “Everyone is entitled to a social and international order in which the rights and freedoms set forth in this Declaration can be fully realised.” This is the size of the prize that is within reach. Our challenge is to grasp it.