How can the public exert more pressure on governments to take action on climate change? 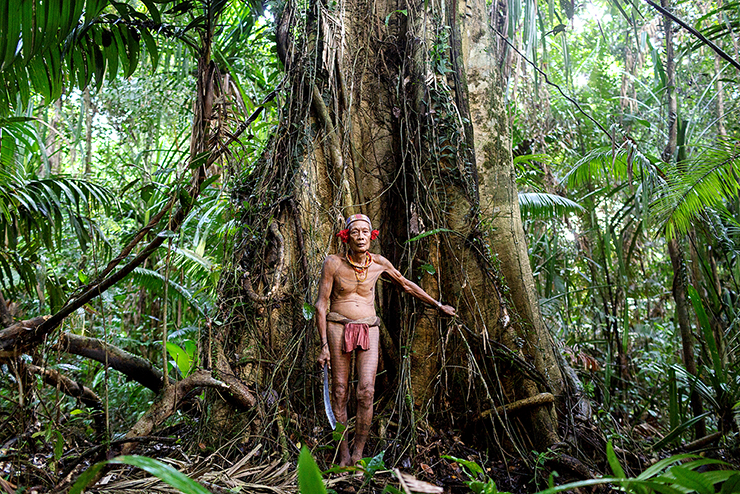 A shaman of the Mentawai tribe in the jungle on the island of Siberut, Sumatra, Indonesia. The primary climate-change issue in Indonesia is the threat to the rainforest posed by commercial palm oil plantations; Sumatra and Borneo are the regions most at risk © Matjaz Corel/Alamy Stock Photo

How can the public exert more pressure on governments to take action on climate change?

Among the most vexing problems of our time, climate change is by far the biggest. The current ongoing rapid change to our climate has the potential to engender the end of society as we know it – yet it would be the direct result of human activity. The evidence can be seen everywhere: rising global temperatures, shrinking ice sheets in the polar caps, glacial retreat in numerous mountain ranges, rising sea levels, growing number of extreme weather events and increased ocean acidification.

The phenomenon of climate change was largely regarded as fake until the 1980s, when the first polls on the subject were carried out. Currently, the views of the public in the Eastern and Western hemispheres are not that different from each other. According to the Yale Program on Climate Change Communication, 69 per cent of Americans want to restrict carbon emissions from coal power plants.

According to the European Commission, 92 per cent of Europeans see climate change as a serious problem, while 79 per cent agree that more public financial support should be given to the pursuit of clean energies – even if it means reducing or removing fuel subsidies. Meanwhile, 90 per cent of people in Europe also believe it is essential for national governments to improve energy efficiency and set targets to increase renewable energy use.

In Indonesia, the primary issue regarding climate change is the commercial palm oil plantations, especially in the regions of Borneo (known as Kalimantan in Indonesia) and Sumatra. Planting palm oil involves clearing out large areas of rainforest, reducing their rich biodiversity, resulting in the displacement and extinction of animals that live there. This includes endangered species such as the Borneo and Sumatran orangutan, Borneo pygmy elephant, Sumatran elephant, Sumatran tiger, Sumatran rhinoceros and other species that exist on the two islands.

The rainforests of Indonesia also contain carbon-rich tropical peatlands that act as carbon sinks. These are removed during deforestation, causing more greenhouse gases (GHGs) to be released into the atmosphere.

In 1970, 70 per cent of Borneo was covered with rainforest – that number has now decreased to 30 per cent and is reducing every day. The clearing of rainforests to make way for palm plantations is often done through illegal forest fires, which release up to 2.57 gigatons of carbon a year. Most recently, in 2013, the forest fires in Kalimantan represented up to 25 per cent of all global carbon emissions worldwide. Due to this, Indonesia is the fifth-largest emitter of GHGs and tops the list for forest-based emissions.

In 2015, Indonesia pledged to reduce emissions by 29 per cent and a further 12 per cent by 2030 if given $6 billion in aid. However, environmental organisations have raised doubts, citing the vague plans Indonesia currently has to target climate change. Aside from this, the government plans to build 100 coal power plants, one million hectares of palm oil and sugar plantations and increase consumption of local biofuels.

Indonesia is also set to become the largest oil importer and a net natural gas importer in the next five years, with intentions to build more car-centric infrastructure, including new highways, across the archipelago. The country is often overlooked at climate change summits, and is currently doing poorly to achieve climate goals as outlined in the Paris Agreement. Yet it could be the country that dooms the global climate, unless serious action is taken.

So what can people do? As environmental activist David Suzuki says: “In a world of more than seven billion people, each of us is a drop in the bucket. But with enough drops, we can fill any bucket.”

Changes in daily behaviours can also combat climate change. The use of renewable energy or low-polluting energy sources is a great first step. With decreased costs of solar panels and the development of electric cars, the process of switching from fossil fuels to renewable energy or low-polluting energy vehicles has become easier and more cost-effective.

Countries with medium-sized economies such as Thailand and Bangladesh have shown that mass installation of solar panels is feasible, with Bangladesh installing rooftop solar systems on 3.5 million homes already. Other energy habits that can help reduce emissions include ‘greening’ our commute – for example, using public transport, riding a bike, or car sharing. All these activities lower net emissions as the average emissions per person decrease. These are the activities that the Earth Hour campaign is advocating, especially in Indonesia.

Since it was initiated by WWF in collaboration with the Jakarta Provincial Government 10 years ago, Earth Hour has become one of the largest public movements in Indonesia promoting environmental awareness for urban populations. The Earth Hour communities – now in more than 30 cities across Indonesia – are tirelessly campaigning to get people to use public transport, save energy, choose energy-efficient electronics, reduce waste, and become ‘smart’ consumers. They support local municipal governments to develop new sustainability policies and to announce their commitments or pledges towards sustainable cities during Earth Hour celebrations. They also run an education programme for children.

Climate change is a problem that we need to tackle on a united front. Politicians, in theory, act on the will of the people. Public opinion, therefore, is critical in dictating public and foreign policy. Together, individual actions can lead to a sustainable future for generations to come.