Endorsed by governments, each rigorously scrutinised IPCC report represents the current state of scientific evidence and knowledge on climate change 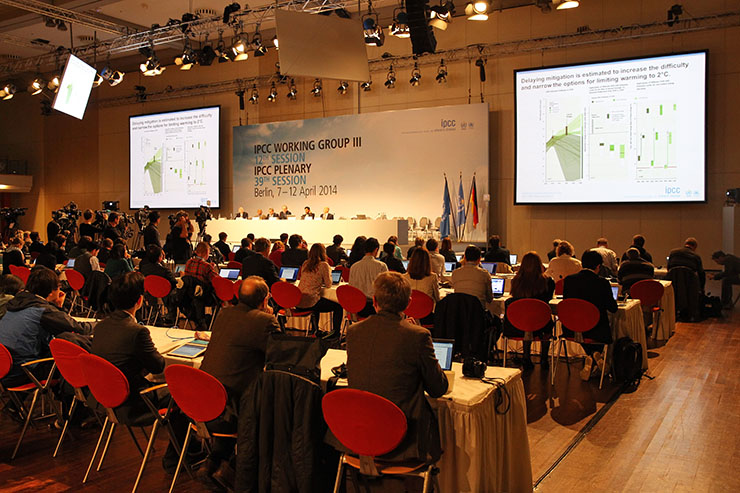 Endorsed by governments, each rigorously scrutinised IPCC report represents the current state of scientific evidence and knowledge on climate change

In November 2014, the Inter-governmental Panel on Climate Change (IPCC) released the final instalment of the Fifth Assessment Report (AR5). This is a key input into the climate nego-tiations being conducted under the UN Framework Convention on Climate Change (UNFCCC) that are intended to result in a global, legally binding agreement to tackle climate change. The next full round of negotiations, or Conference of the Parties, takes place in Paris in December and is known as COP21.

Comprising contributions from each of the IPCC’s three working groups, plus a Synthesis Report, AR5 is the most comprehensive and largest assessment of climate change – its causes, its impacts, possible future risks and options for adaptation and mitigation – produced to date. I would like to look at some of the key findings of that report, but also examine how the IPCC, in what has been described as one of the largest scientific endeavours ever undertaken, reached those conclusions.

The different components of AR5 can be found on the IPCC website (www.ipcc.ch). A very brief summary of the contents – four volumes of over 4,800 pages – can be found in the 21 headline statements of the Synthesis Report, which distils and integrates the findings of the working group contributions.¹ In presentations to different audiences we often highlight three conclusions:

It’s worth considering how the report’s 830 authors, supported by hundreds of other scientists and experts, reached these and other conclusions. Like all science, AR5 builds on previous work. For example, the conclusion in the contribution of Working Group I (the physical science basis of climate change) is that “it is extremely likely that human influence has been the dominant cause of the observed warming since the mid 20th century”.

That 2007 finding in turn built on the Third Assessment Report in 2001, which noted that “most of the observed warming over the last 50 years is likely to have been due to the increase in greenhouse gas concentrations”. In IPCC usage, ‘extremely likely’ means with at least 95 per cent certainty, ‘very likely’ with at least 90 per cent certainty, and ‘likely’ at least 66 per cent.

So, what enabled the AR5 authors to express this greater certainty? They drew on multiple lines of evidence – higher atmospheric and oceanic temperatures, diminishing amounts of snow and ice, rising sea levels and increased concentrations of greenhouse gases – to conclude that warming of the climate system is unequivocal, and that many of the observed changes since the 1950s are unprecedented.

For example, if the start year is a hot one the trend will be lower than by starting with a relatively cool year. Longer-term observations, however, show a clear trend. Each of the past three decades has been successively warmer than the preceding decades since 1850. An important finding of the Working Group I report in this context is that in the 40-year period from 1971 to 2010, more than 90 per cent of the net energy increase in the climate system was stored in the ocean.

Reflecting overall understanding
Having established the fact of warming, the IPCC scientists then looked at the causes. An analysis of the contributions to observed surface temperature change shows that the warming effect of greenhouse gas emissions, less the cooling effect of other human-caused drivers such as aerosols, corresponds closely with the observed warming, while natural factors, such as changes in solar irradiance and emissions from volcanoes, are negligible. This is what enabled the IPCC scientists to conclude that it was extremely likely that human influence was the dominant cause of the observed warming.

I have taken some time to discuss this conclusion, but there are plenty of other examples in AR5 where the findings of the IPCC rebut arguments that play down the threats of climate change. The Working Group II contribution (impacts, adaptation and vulnerability) makes it clear that the impacts of climate change are already being felt on every continent, from the poles to the equator, from the mountains to the seas, and in both rich and poor countries.

At this point it is worth recalling that the IPCC does not conduct its own research or its own measurements of climate data. The mandate of the IPCC is to assess the thousands of scientific publications produced each year that are relevant to climate change. The IPCC establishes what is known and not known about climate change. Where necessary it highlights disagreements and controversies in the scientific community. But the IPCC does not have its own view. It simply reflects the overall understanding of the scientific community on this subject.

The objectivity of the IPCC goes beyond this. While it may lay out options for governments to tackle the risks of climate change, it never tells them what to do. The IPCC is policy-relevant but never policy-prescriptive. The authors of Working Group III (mitigation of climate change) like to use the image of a mapmaker: the scientists produce a map for policymakers that will enable them to reach their goals. They show multiple mitigation pathways that limit warming, along with technological, economic, social and institutional challenges and explain implications of timing of mitigation efforts, but it is the policymakers that decide which route to follow. This neutrality is one of the pillars of the IPCC.

But what makes an IPCC report so robust is the unique partnership between scientists and policymakers. The IPCC’s members are the world’s governments, and it is they who request the scientific community produce a report. After repeated drafting by the IPCC’s authors, helped by review comments from governments and other experts in the scientific community, the governments then examine the Summary for Policymakers of each instalment of the report in detail.

In an approval session, the government representatives propose changes for the sake of clarity and consistency. The scientists responsible for that part of the report decide whether the proposed change is scientifically sound and consistent with the underlying report. Only then will it be accepted. The result of this dialogue between those who request the report and will use it, and those who write it for them, is a strong text endorsed by both policymakers and the scientific community. At the end of the session the Summary for Policymakers is approved by consensus, and by extension the full report is accepted, meaning that the world’s governments stand behind the findings.

The work of the IPCC does not stop there. Besides an extensive programme of outreach to present the findings to stakeholders in different countries, IPCC authors also take part in regular dialogues with negotiators at the UNFCCC negotiating sessions. Detailed presentations are followed by in-depth discussions to ensure that negotiators have a thorough understanding of the report’s conclusions.

As a result, the last full session of the UNFCCC, COP20 in Lima, explicitly welcomed AR5, acknowledged it provided the scientific foundation for the negotiations, urged negotiators to use the information in AR5 in their discussions, and invited the IPCC to continue to provide information to its parties.