What is the relationship between population growth and human-made climate change? Must we necessarily limit the former to fix the latter? 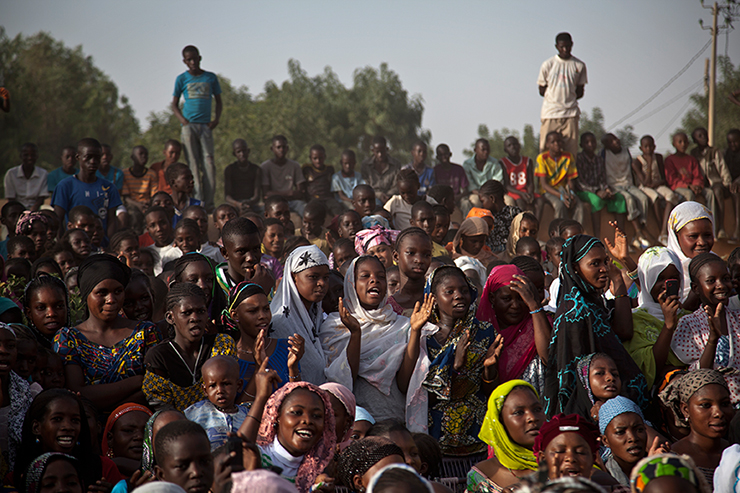 Audience at a youth theatre in Gao, Mali. Mali has the third highest birthrate in the world but one of the lowest per capita GHG emissions.  © UN Photo/Marco Dormino

What is the relationship between population growth and human-made climate change? Must we necessarily limit the former to fix the latter?

Understanding the relationship between population and climate change is crucial to the design of policies that protect people’s rights, particularly their reproductive choices, while preserving the planet. Yet, the social, economic and environmental consequences of population growth have been the subject of strong opinions, including in popular media, and a source of much controversy, conjecture and confusion over the years.

Many fears about population growth are not borne out by the evidence, and the relationship between population growth and climate change is no exception.The Programme of Action of the International Conference on Population and Development (ICPD), held in Cairo in 1994, shifted the prevailing population discourse away from a focus on numbers and population targets. Instead, it moved the conversation towards actions to uphold universal principles of human rights and freedom of choice, particularly for women and girls to exercise decisions over their own bodies.

These contradictory approaches are actually driven by the same basic misconception about the links between population and climate change.This misconception is that more people automatically equals more emissions. From a climate change or natural resource perspective, there is a certain intuitive logic to it. More people is usually assumed to mean more eating and drinking, more driving or more energy use – all of which under our current model cause major emissions of GHGs. Yet emissions are not equally distributed across the world’s population, any more than the consumption of food or cars, or the use of air conditioning.

Figure 1 shows GHG emissions per capita by total fertility rate – the number of children born per woman over the course of their lives – a key factor in population growth.High per capita emissions, occurring in the wealthiest countries, correlate with the lowest levels of fertility. The poorest countries generate the lowest per capita emissions – many close to zero. While counter-intuitive to some, the poorest countries that have the highest fertility rates and the fastest rates of population growth also make the least contribution to GHG-generating phenomena.

Figure 1: Fertility and per capita emissions.

So, at present, a linear relationship between population growth and emissions cannot be established or defended. Instead, income is the best proxy for emissions creation. Presently, only about 28 per cent of the people in the world make more than $10 per day, the income level at which consumption begins to significantly contribute to climate change emissions.The alarming reality is that it has not taken very many high emitters to put the planet in significant danger.

Making better choices
The world is focused on helping the poorest countries and their populations emerge from poverty, including through the adoption of the Sustainable Development Goals with the ambition of ending extreme poverty by 2030. Under our current model of economic growth, poverty reduction will bring an increase in emissions. And then – indeed – the population of the poorest countries will become increasingly important to emissions and to climate change. So, in the long term, population growth is certainly important to climate change.

Global experience has also shown that with better choices, we can structure our lives in ways that enhance wellbeing, while limiting emissions. There have been dramatic emissions reductions in some European countries and (for a period) in the United States, and a decline in intensity (or the emissions cost of GDP growth) in China and other emerging economies.

Figure 1 shows wide variations in the emissions per capita among high and middle-income countries. This suggests that, even now, we are not locked into a scenario in which growing wealth demands high emissions.

Reasons for optimism
As technology continues to improve, options for more sustainable, less carbon-dependent development will expand, allowing all countries and people the opportunity to develop while preventing climate change.

This is absolutely necessary. The data on population and emissions show that slowing population growth, even rapidly, is not a shortcut to preventing climate change. Indeed, it will have little or no effect if we cannot transition away from fossil fuels and other drivers of climate change and towards renewable and sustainable modes of living.

It is critical that we get smart about the relationship between population and climate change to make the best policy choices and avoid the pitfalls of the past. The Programme of Action of the ICPD was advanced to protect women and men from abuses of reproductive rights consequent to widespread concerns over population growth in the 1970s and 1980s.

In the Programme, the world’s governments achieved consensus that widespread promotion of reproductive health and rights and women’s empowerment offer a more effective means to advance development than a focus on population control. With better health, education and opportunity, most people choose smaller families – and population growth rates decline.

The 2030 Agenda for Sustainable Development recognises the importance of this approach to population, including universal access to sexual and reproductive health and reproductive rights. The time has come to redouble our efforts to ensure these achievements.

Through implementing the Paris Agreement, which represents a generational awakening to tackle the challenge of climate change, we now have great reason for optimism. Namely, that we may simultaneously achieve a world of lower emissions while expanding women’s and girls’ rights, choice and wellbeing.

LET’S GET THE FACTS RIGHT

The global rate of population growth is rapidly decelerating – from 2.05 per cent per year in the period 1965–70 to 1.52 per cent in 1990–95 and 1.09 per cent in 2015–20. Nearly half of the projected population growth between now and 2100 will not be driven by high fertility. Instead it will be fuelled by ‘population momentum’, or large numbers of women of reproductive age – from high fertility in the past – having children. Only 38 countries worldwide have total fertility rates higher than four children per woman, which drive the fastest rates of population growth. Together, these countries constitute only 13 per cent of the world’s population. Many people already want smaller families but struggle to achieve that aim. About 214 million women in developing regions who want to avoid pregnancy do not have access to modern methods of contraception.