Who defines Trump’s impact on the Paris Agreement? You do 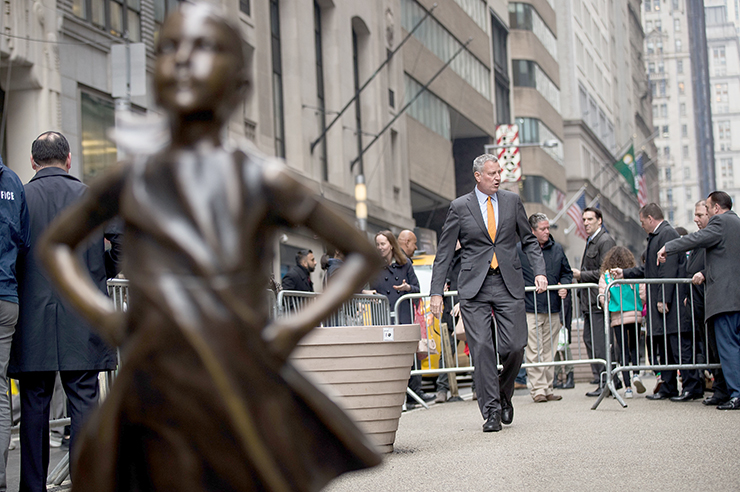 New York City Mayor Bill de Blasio on Wall Street. The strength of commitment to the Paris Agreement pledged by de Blasio and other mayors contrasts with the more muted support from the financial sector
© Drew Angerer/Getty Image

Who defines Trump’s impact on the Paris Agreement? You do

The US withdrawal from the Paris Agreement got the immediate media coverage the Trump team wanted, reassuring his core support base – climate change is a dog whistle issue in US politics today – while upsetting the ‘liberal elite’ the world over. Bull’s eye!

But with each day and week that passes, evidence suggests his actions may have backfired. As Al Gore highlights, Donald Trump “has produced the largest upsurge in climate activism I’ve ever seen”. This activism extends well beyond popular protests and covers all walks of society.

The one group that has not responded proactively is the big (and mainly US head-quartered) institutional investors. This article describes the changed context, highlights the comparatively weak response of these investors and identifies who can change this.

A major increase in activism
Global public opinion has been highly critical of the Trump team’s decision to withdraw from the Paris Agreement, with popular protests in many countries. But the most important reaction has been in the US itself where many US states, cities and companies have now made their direct commitment to the Agreement.

In the battle of billionaires, Michael Bloomberg’s response to personally pay the US’s share of the United Nations Framework Convention on Climate Change budget is highly significant, not least because Bloomberg was the Mayor of New York.

As Mark Watts writes in this publication, city and state legislators are particularly well placed to play a leadership role in this new context because “the cities that are able to deliver a sustainable, low-carbon future the quickest will also be the world’s healthiest, wealthiest, most equal and most liveable”. What Watts does not spell out is that it is harder for fossil fuel vested interests to capture city and state legislators.

The military could also play a stronger leadership role, even in countries where corporate capture of politics is marked.According to Admiral Chris Barrie, the former Head of the Australian Defence Force: “…we are approaching a time soon when there will be a serious possibility that no amount of effort in deploying the limited resources we have available will be able to ameliorate the national security problems and challenges we are confronting. We need to take decisive action now to head off the most unpalatable of climate change outcomes and this requires strong, determined leadership in government, in business and in our communities.”

And actuaries, scientists and doctors are just some of the other professionals who are also helping to fill the climate leadership gap.

Investors have enormous influence when it comes to corporate strategy and behaviour, arguably more than most national governments. To put this in perspective, the biggest fund managers have assets under their management equivalent to the GDPs of some major countries. BlackRock’s assets under management are equivalent to the GDP of Japan, Vanguard’s to the UK. Investors define the pay and the career prospects of corporate CEOs and there are myriad other connections that mediate this influence. What could and should investors be doing? Investors need to act as forceful stewards and take shared responsibility for the long-term development of their investments by using their influence to shape public policy, to guide investee companies and to direct informational intermediaries. Let us take each in turn.

First, let us consider forceful stewardship of climate-related public policy. What would this look like? Historically, the finance sector has been most effective when it is lobbying against something.

In the US, the already minimalist ‘fiduciary duty rule’ has now been kicked into the long grass. And in Europe – despite significant cross-party political support – the Financial Transaction Tax is still being delayed largely because of opposition from the finance sector. A coordinated approach to this kind of lobbying is required, but with a positive agenda. For example: to promote climate wellbeing.

One early example of good practice is how some major insurance companies came together to lobby against fossil fuel subsidies – how they will step up their activities to ensure policy change that means persuading others, notably US insurance companies, is yet to be seen.

The way investors responded to the final report of the Taskforce on Climate-related Financial Disclosure (TCFD) is another good example of the change that is needed.

A close comparison of the impressive list of companies that supported the Task Force (notably, with considerable staff time), to the stellar roster of 103 companies whose CEOs signed a letter in support of its recommendations, reveals some curious discrepancies.

In the financial sector, for example, missing from the CEO signatories were BlackRock, Banco Bradesco, JP Morgan and Mercer. Yet all the organisations are said to have played very active roles in the TCFD; indeed Banco Bradesco provided two Deputy Chairs for the TCFD.

Some of the reasons for inaction cited include: “we don’t sign on to group statements”, “don’t worry about the CEO signature – what matters is what the front-line investment staff do in the day-to-day interactions with companies” and “we are a complex organisation and we can’t bulldoze this change through”.

We have also heard there is a culture, especially in the US, of financial sector organisations being active in responsible investment projects with no expectation of visible or authentic CEO leadership. This is, of course, very different from other organisations, such as the Business Roundtable and the World Business Council for Sustainable Development, where CEOs take a personal leadership role.

Many of the big investors were also missing from the letter voicing support for the Paris Agreement. Also missing were the six major US banks who called for “cooperation among governments in reaching a global climate agreement” ahead of the Paris Agreement. Did the election of Donald Trump really invalidate their earlier judgment of risk?

The bottom line is that most of the 10 largest investment managers in the world have stood back from giving their full support to both TCFD and the Paris Agreement. These players – the vast majority of whom are US headquartered – therefore share responsibility with President Trump for missing this opportunity to contribute to a climate safe world, and in failing those who rely on their leadership.

The good news is that five investment firms have demonstrated their leadership at the CEO level, which shows us that investor leadership is possible.

The forceful stewardship approach
Second, we need forceful stewardship of investee companies. Equity but also debt, infrastructure and other investors must, if they are genuinely climate aware, be explicit about the risks involved in ignoring, or going slow on, the transition to a low-carbon world.

Schroders is a good example of an asset management company that speaks clearly to the mainstream press. The time has passed for private gentle discussions, company by company, about incremental change. What is now needed is sector-wide transformation, starting with the high-impact sectors, in particular energy utilities and automobiles.

The best way to do this is for investors to vote for AGM resolutions calling for the companies to publish net-zero-by-2050 transition plans. These two sectors, which are the biggest users of fossil fuels, are also already facing disruption so there is every reason for investors to want to know how the coming transition will be handled.

There is a very strong case for prudent investors – whatever they think of the science of climate change – to want this information and it is encouraging that in 2016, 40-60 per cent of shareowners voted for such disclosure.

And finally, investors should research and be forceful stewards of their own supply chain and thus the critical informational intermediaries, given the huge (but largely hidden) importance of sell-side and credit rating analysts, voting advisers and auditors.

In the last financial crash, credit rating agencies played a major role in facilitating market mispricings. It will be critical that these powerful but largely hidden intermediaries don’t make the same mistake with the ‘sub-clime’ crisis.

Let me be crystal clear: this focus on stewardship is very different from what investors generally highlight when they are talking about climate change to the media or at UN events.

Some speak of divestment, which can challenge the legitimacy of the fossil fuel sector and can manage stock risk, and perhaps even sector risk if exposure to the sector is significantly reduced. Some speak of portfolio decarbonisation, which is a good strategy for delivering financial outperformance at low cost (such as ‘smart beta’ investments) and which also has a ‘virtue signalling’ effect when done by large numbers of big fund managers. Some highlight their investment in green equity funds or climate bonds – and these can provide good investment returns and could help trigger market change.

While these can all be good strategies for maximising risk-adjusted portfolio returns relative to peers, and creating a positive market narrative, none of these strategies are primarily designed to manage systemic risk. Only forceful stewardship can do that. This is an example of an ‘inconvenient truth’ close to home for responsible investors and needs to be acknowledged, at least in private, before investors can really be part of the solution to climate change.

Who can lead the way?
So who has to do what differently to get forceful stewardship adopted? Who are the stakeholders who could persuade investment firm leaders to lead?

The responsible investment professional bodies (such as CDP, the Ceres Investors Network on Climate Risk, and Principles for Responsible Investment) could usefully raise their membership bars. If they do not do so, they risk – inadvertently and unintentionally – masking the fact that the biggest investors – many of whom are also members – are failing to do what they should be doing.

Thus, it is entirely reasonable that investors who do not support such resolutions should explain, in public, why they want to continue to be members of responsible investment bodies.

City mayors who are looking to punch above their weight could ensure their pension funds act as forceful stewards. Some have adopted the fossil free strategy and these cities could move to the next level: Fossil Free 2.0, in other words, also focusing on heavy demand sectors. And for cities that have rejected divestment, then clearly forceful stewardship is the way forward.

Religious leaders like the Pope could also adopt this approach and so help end the stand-off between their pro- and anti- divestment advisers. The UN Joint Staff Pension Fund, which is active on several environmental, social and governance fronts, could also adopt a forceful stewardship approach.

All these examples have one thing in common. When we choose to think of Donald Trump as the cause of the problem – and empower him in the process – we forget that we, individually and collectively, could be doing much more to walk our talk, and this includes how we invest.

So let’s stop asking what Trump’s impact on the climate will be. Rather let’s ask what we will do differently now. That’s the only thing we have control over.

And if enough readers of this publication think big, this really could bend the curve of greenhouse gases by 2020 and so transform the world.