If there is one thing guaranteed to affect economic behaviour, it’s price. Is taxing our use of carbon the magic bullet to drive humans away from fossil fuels? 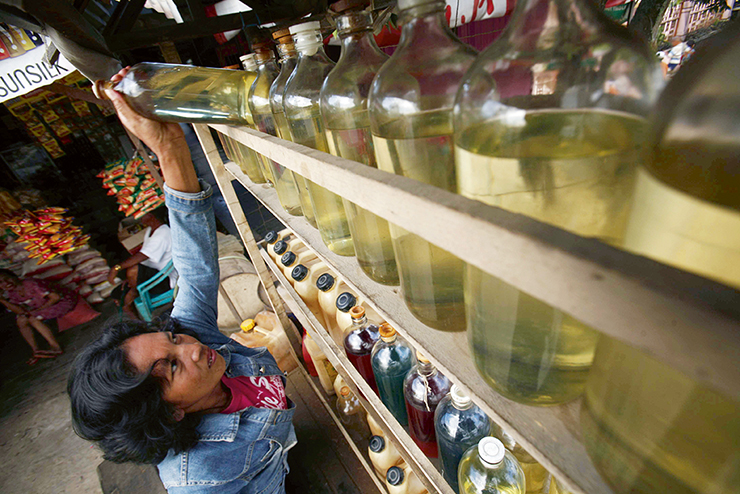 Buying petrol by the bottle in East Kalimantan, Indonesia. Recent tax increases have been accompanied by measures to assist the poor. With around 40% of the population living close to the poverty line, past fuel tax increases have led to violent protests.  © Yusuf Ahmad/Reuters

If there is one thing guaranteed to affect economic behaviour, it’s price. Is taxing our use of carbon the magic bullet to drive humans away from fossil fuels?

Support for carbon pricing is growing around the world. Around 40 countries and over 20 cities, states and regions have adopted or will shortly implement carbon pricing. The World Bank estimates that this covers about 12 per cent of global greenhouse gas (GHG) emissions, triple the coverage of a decade ago.
Now that the Paris Agreement has been reached, we can expect carbon pricing to continue to spread. According to the International Emissions Trading Association, 90 governments expressed interest in it as a part of their Paris Agreement pledges.

China, for example, is planning to scale up its current pilot projects to implement a national emissions trading system (ETS) starting in 2017. It is likely to be much larger than any other ETS in existence. And South Africa plans to introduce a carbon tax in 2016.

It’s not just governments either. At least 435 companies used internal carbon pricing in 2015, and almost 600 said that they anticipate doing so in the next two years. This includes some of the biggest energy companies in the world. Shell applies a price of $40 per tonne of CO2e and ExxonMobil $80 per tonne to guide their investment decisions.

The rationale for carbon pricing
Carbon prices have a number of benefits: they are often the most economically efficient way to reduce GHG emissions; they can help to raise government revenue to support a range of public priorities; they incentivise continued innovation; they provide wider health benefits by reducing fossil-fuel use and the related air pollution; and they provide a clear and credible price signal to guide business expectations.

We’re seeing increasing evidence that countries and regions with carbon taxes can reduce GHG emissions without harming the economy. For example, the first five years of British Columbia’s carbon tax, in which prices reached CAD30 per tonne of CO2e, saw growth rates that were comparable with the rest of Canada, while emissions fell by around 10 per cent. Sweden first introduced its carbon tax in the early 1990s, with prices now reaching around $130 per tonne of CO2e. Over that time, its economy grew by nearly 60 per cent while emissions fell by 23 per cent.

In the United States, the nine states in the Regional Greenhouse Gas Initiative (a cooperative effort to cap and reduce emissions from the power sector) experienced higher economic growth than other states from 2009 to 2013. At the same time, they reduced their emissions by 18 per cent compared to a four per cent reduction on average in other states.

Another important benefit of well-designed carbon price instruments is that they raise fiscal revenues that can be put to productive uses, including to reduce existing distorting taxes. For example, British Columbia has used its carbon tax revenues, around $1 billion or three per cent of the total budget, to offset reductions in income and corporate taxes.

Consistent and long-term carbon pricing will lead to a shift away from fossil-fuel use, which will help decrease these health effects. Combined with measures that directly reduce air pollution, carbon pricing has possible health benefits valued at $73 per tonne of CO2 abated, according to research done for the Global Commission on the Economy and Climate.

One final advantage of carbon pricing is that it can send a clear signal to markets. Strong, predictable and rising prices can help to align expectations on the direction of change, thereby steering production and consumption choices and the type of investments that are made. A well-designed carbon price will give businesses the certainty they need to shift to the low-carbon economy of the future.

Overcoming barriers to carbon pricing
Despite the clear economic and environmental advantages of taxing carbon, where carbon prices are in place they are often too low, and almost all schemes exempt some of the most polluting activities or fuels, so the full potential of their benefits is not realised.

While carbon prices vary significantly, 85 per cent of priced emissions are at less than $10 per tonne of CO2e. Many countries continue to provide large subsidies and tax breaks to support fossil-fuel exploration, production and consumption – essentially encouraging their use, and working in effect as a ‘negative carbon tax’.

One of the reasons for the lack of ambition is a concern about competitiveness. Governments worry that if they unilaterally enact a carbon tax, businesses will migrate to other countries without the same regulations: so-called carbon leakage. While this is a widespread concern, recent evidence actually shows that carbon leakage has not materialised on a significant scale in practice. And the latest research suggests that, even at higher carbon prices, the impacts on industrial competitiveness in Europe are likely to be low.

International cooperation can help overcome competitiveness concerns and other impediments to carbon pricing. If multiple countries or regions make policy changes in unison, they won’t have to worry about carbon leakage to the others.

We can accelerate progress by building coalitions of willing actors, including through international fora like the G20 or the new Carbon Pricing Leadership Coalition, which brings together more than 26 governments, 90 businesses and 30 other strategic partners to build the evidence base for effective carbon pricing. They can provide political leadership and establish a focused platform to learn from each other and develop guidance on technical, administrative and economic cooperation aspects of carbon pricing.

Another common objection to carbon pricing is that low-income households and certain sectors will unfairly bear the brunt of the costs. But successful reforms have addressed this, for example by using a share of the carbon pricing revenues to compensate affected groups for any increases in the cost of living, such as higher energy bills.

These need to be well targeted, and can, for example, be provided through cash transfers or social security payments, reductions in marginal income tax rates, or financial help to invest in energy efficiency measures that can offset higher energy bills.

Clear and well-communicated approaches to phase in carbon taxes and phase out fossil fuel subsidies are essential to smooth the transition, along with dedicated policies to help address distributional impacts on affected groups, in particular on poorer households.

Designing carbon pricing for success
Carbon pricing works best when tailored to the national level, and as part of a well-aligned package of climate policies. This of course includes reforming fossil-fuel subsidies, which are essentially negative carbon prices. Fossil fuel subsidies cost around $550 billion per year globally, and disproportionately favour the rich, even though they’re often aimed at helping the poor.

Now is a good time for reform, because low oil prices can offset the impact of reforms on household energy or fuel spending. As with carbon pricing, many countries are moving forward on fossil-fuel subsidy reform. Indonesia is an example of recent effective reforms that also addressed the needs of the poor.

There, increases in the prices of gasoline, diesel and electricity were offset with a $2.6 billion compensation package for the poor. In India, reform of cooking gas and liquefied petroleum gas subsidies was paired with complementary measures for those affected, including direct benefit transfers linked to biometric identity cards.

The Global Commission on the Economy and Climate has called for all developed and emerging economies, at a minimum, to commit to introducing or strengthening carbon pricing by 2020, and to phase out fossil-fuel subsidies.

A consensus is emerging that carbon pricing is one of the most effective, economical ways to tackle climate change.

To progress further, governments need to include carbon pricing in a package of smart policies, act together rather than unilaterally, share best practices with others who are attempting reform, and employ compensatory measures for those most affected by the changes. Reform will require concerted effort, but the pay-off will be enormous.