Countries are progressing too slowly on green growth. Economic and environmental policy priorities must be more closely aligned 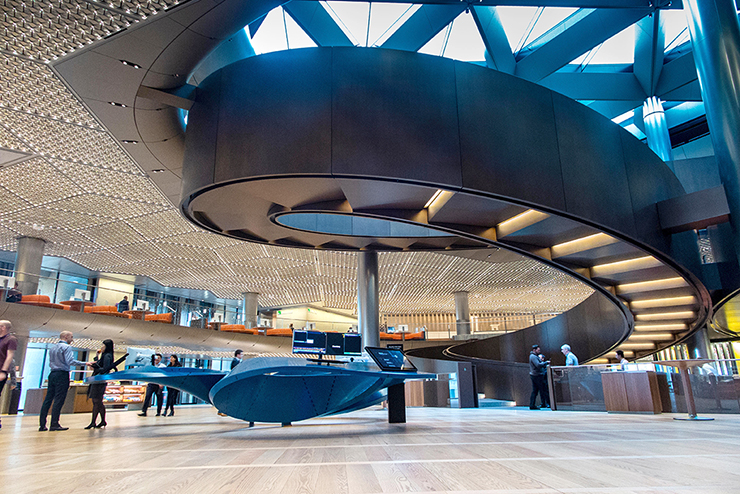 The interior of Bloomberg’s HQ in London, rated as the world’s most sustainable office building. Innovation in climate-change related building technologies more than tripled in the decade to 2010 but has since tailed off  © Nick Moore/Alamy Stock Photo

Countries are progressing too slowly on green growth. Economic and environmental policy priorities must be more closely aligned

‘Greening the economy’ is about fostering growth and development while ensuring that natural assets continue to provide the resources and environmental services on which our wellbeing relies. Our ability to sustain economic and social progress in the long run depends on our capacity to reduce dependence on natural capital as a source of growth, abate pollution, enhance the quality of physical and human capital and reinforce our institutions.

The Organisation for Economic Co-operation and Development’s (OECD’s) approach to monitoring green growth is centred on production and consumption. It describes the interactions between the economy, the natural asset base and policy actions. Drawing on the OECD Green Growth Indicators framework, this article focuses on some of the economic opportunities – and challenges – of green growth in the domains of innovation, financial markets, and changing production and consumption patterns.

Shifting the direction of innovation
Green growth can generate economic opportunities through expanding markets for green technologies, products and services, both domestically and abroad. Innovation is a key driver. New technologies can help achieve environmental objectives cost efficiently, and lead to new business opportunities and markets. It is widely acknowledged that far-reaching innovation will be needed to address climate change and other environmental challenges, and to accelerate the transition to green growth.

Yet, progress on innovation has been mixed. Total spending on research and development (public and private) has increased in most OECD countries. Government budgets for R&D have also increased in many countries since 2000. However, the share dedicated to environment and energy objectives has remained stagnant.

Between 2000 and 2010, innovation in environment-related technologies (measured using patent applications) increased faster than innovation across all technologies. Innovation in climate change technologies related to buildings, transport and energy in particular more than tripled. However, more recently, this activity has slowed across all environmental domains (Figure 1). This might be due to changing energy prices as well as the persistent uncertainty over the direction and ambition of environmental and climate policies at the domestic and global levels.

What we need is long-term incentives to direct innovation towards environmental objectives more effectively, in a way that generates the greatest net benefit to society. One example would be tracing a future path for pricing emissions or for tightening emission limits. Providing predictable market signals is important to guide long-term investment decisions – for example, in alternative energy sources. We also need to incentivise firms and consumers to take efficient abatement and mitigation action.

Policy must create a framework that encourages innovation. This could include measures to strengthen intellectual property protection, support R&D, promote innovation clusters, or invest in education and skills. Access to finance is also key, both for bringing prototypes to market and for investing in necessary infrastructure (such as charging stations for electric vehicles).

Mobilising finance
Foreign finance – public and private – can be useful in countries lacking sufficient access to domestic finance. It can help catalyse investment for environmental projects and technologies, fulfilling both development and environmental objectives. It can also bring other benefits, such as international technology transfer.

For governments to successfully attract foreign sources of finance they must first improve the framework conditions (such as the rule of law or availability of skilled labour). They must pursue policies that facilitate market entry and exit and do not discriminate between investors. Second, governments must strengthen the use of public financing to mobilise private finance for green growth projects. In particular, they should minimise the potential for public finance to crowd out private finance.

Developing markets for cleaner products
A well-managed transition to a greener economy involves a shift to cleaner products and production processes. In the European Union, the 10 most carbon-intensive industries (including electricity and energy supply, transport and some manufacturing) account for 83 per cent of all carbon dioxide (CO2) emissions.

However, on average these industries account for only 28 per cent of employment and 21 per cent of value added. The concentration of industries is even higher for some of the other pollutants (methane, fine particulates, nitrogen dioxide). In the absence of optimal policies spanning all sectors of the economy, targeting mitigation efforts on the worst polluters can reduce emissions substantially. Encouragingly, the share of trade in environmentally related products is rising (Figure 2). This has occurred in many countries that have tightened environmental policies and regulations. It has also been accompanied by improvements in economic performance.

Reaping economic opportunities requires considerable strengthening of green taxation and incentivising innovation. This can be achieved by facilitating market entry and exit, by encouraging an efficient reallocation of labour across sectors and by ‘greening’ capital markets. These steps will help direct markets towards greener outcomes in a cost-efficient manner and open up new opportunities for exports and employment. Stronger international coordination can mitigate potential losses in the competitiveness of domestic industries. At current carbon prices, only very limited negative impacts on competitiveness have been found.

It also provides incentives for abatement at each unit of pollution, down to zero emissions. In addition, the revenue raised can be used to support fiscal consolidation or to reduce other taxes. Shifting the overall tax burden away from labour towards environmentally harmful consumption and production patterns, while maintaining the overall level of redistribution constant, can improve economic efficiency.

But the performance of countries is mixed. Over the past 15 years, countries such as Israel, Poland, Estonia, Colombia, Costa Rica, Brazil and Turkey have shifted part of their revenue collection from labour to environmentally related activities. Some countries have introduced taxes on nuclear fuel and air travel, vehicle emissions and local air pollution.

For green tax reform to succeed, we need to address two main challenges. First, abatement should be incentivised across all sources of emissions, not just selected sectors. Second, all types of support or preferential tax rates for fossil fuels should be discontinued. This also implies that potentially regressive distributional tax impacts must be addressed, for example, to protect vulnerable households.

Third, we need to address misalignments in taxation. For example, diesel causes more emissions of CO2 and local air pollutants than an equivalent volume of petrol, meaning that its tax per litre should be higher. Yet, in most OECD countries, the excise tax rate per litre on petrol is higher than on diesel.

Some countries also provide tax rebates or other preferential tax treatment for diesel-powered company cars. Such environmentally harmful discrepancies should be eliminated. Phasing out perverse subsidies
Efforts to promote renewable energy and energy efficiency are also frequently undermined by subsidies – both explicit and implicit. Countries continue to support fossil-fuel production and consumption in many ways, at a cost of more than $60 billion per year in the OECD area (Figure 3).

Another example is research, development and demonstration (RD&D). Public expenditures on energy-related RD&D increasingly target renewable energy in most OECD countries. In the Slovak Republic, Spain, Portugal, Ireland and New Zealand, over half of public- energy RD&D is now directed towards renewables. In Japan, France and Australia, this share has more than quadrupled  since 2000. However, public funding for fossil-fuel RD&D keeps rising in Italy, Japan, Canada and Austria, and now accounts for over a quarter of publicly funded energy RD&D in Poland and  New Zealand.

The views expressed in this paper are the authors’ own and do not necessarily reflect the views of the OECD or its member countries.