Rising to the climate challenge

The vision adopted in 2015 needs to be translated into action and results, beginning now 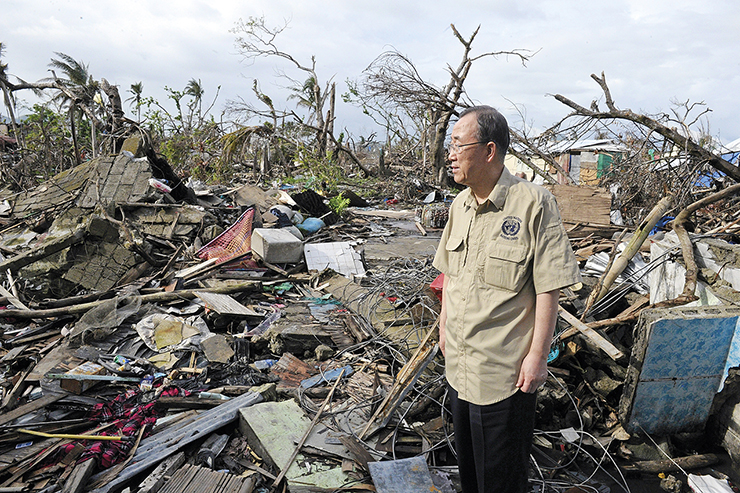 Rising to the climate challenge

The vision adopted in 2015 needs to be translated into action and results, beginning now

Ever since I became Secretary-General, climate change has been among my top priorities. From Bali to Paris, I have worked hard to elevate the issue on the global agenda and support efforts to forge a universal climate agreement. I have engaged directly with world leaders, visited some of the worst-affected parts of the world, and undertaken a wide variety of other initiatives to heighten the sense of global urgency. The reasons are clear and simple. We are the first generation to truly feel the effects of climate change. Only we can take meaningful steps to avert its worst impacts.

Climate change has implications for almost all areas of the work of the United Nations and the wellbeing of humanity. Rising to the climate challenge is essential for sustainable development. The actions needed to reduce emissions and build climate resilience are the very same that are needed to lay the foundation for prosperity and security for all.

The December 2015 breakthrough in Paris was long-needed, and promises to be a game-changer in our efforts to set the world on a sustainable footing. The adoption of the Paris Agreement on climate change, so soon after world leaders agreed the 2030 Agenda for Sustainable Development, marked a turning point. We have a real opportunity to change the course of history, with governments, businesses, civil society and individuals everywhere working in concert, guided by a transformative vision for people, planet, prosperity and peace.

The adoption of these agreements represents an important triumph of multilateralism at a critical time. Governments now recognise that the world cannot continue on its present trajectory and that business as usual is no longer a viable option. Governments have also recognised that they cannot address the complex issues of sustainable development alone. Many of today’s problems are global in nature and solutions require action by all countries, developed and developing, in partnership with a wide range of empowered actors.

Arriving at the 2030 Agenda for Sustainable Development, with its 17 Sustainable Development Goals (SDGs), and the Paris Agreement on climate change was an outstanding achievement, but now the work truly begins. The task ahead is monumental, and time is not on our side. Greenhouse gas (GHG) emissions continue to rise. One person in every eight lives in extreme poverty. There are more refugees and migrants than at any time in the history of the United Nations. Rising inequality and the current wave of violent extremism are breeding a growing sense of insecurity in all parts of the world.

The vision adopted in 2015 needs to be translated into action and results, beginning now. We need to see efforts to achieve the SDGs scaled up quickly, and we need the Paris Agreement to enter into force as soon as possible. On Earth Day 2016, 175 countries signed the agreement, setting a record for the most signatures on a global instrument on a single day. Large, emerging economies, high- and middle-income countries, and nations at every stage of development are all saying they want a low-carbon future that can limit global temperature rise and underpin sustainable development. Now we need to solidify their commitment.

To help advance this process, I am convening an event on 21 September at the United Nations headquarters in New York for countries to deposit their instruments of ratification. We need 55 countries accounting for 55 per cent of global GHG emissions to bring the agreement into force. My dearest hope is that this will occur before my term as Secretary-General ends on 31 December.

As I look back on my tenure, and forward to the coming decades, I believe we have cause to be optimistic about our world. My experience has shown me that we have the tools to build a more sustainable future. Innovative and effective partnerships are multiplying in all regions. Clean energy sources, which promise economic growth, increased social equity and a healthy environment, are increasingly competitive with fossil fuels. Global awareness of the need for, and possibility of, a sustainable future is growing by the day.

A world of peace, dignity and opportunity is within our grasp. Much hard work lies ahead, but I leave office encouraged that we have the time, the capacity and the will to create the future we want.