As the Sahel becomes Sahara

What happens when habitable land is lost? What can be done to alleviate the consequences? 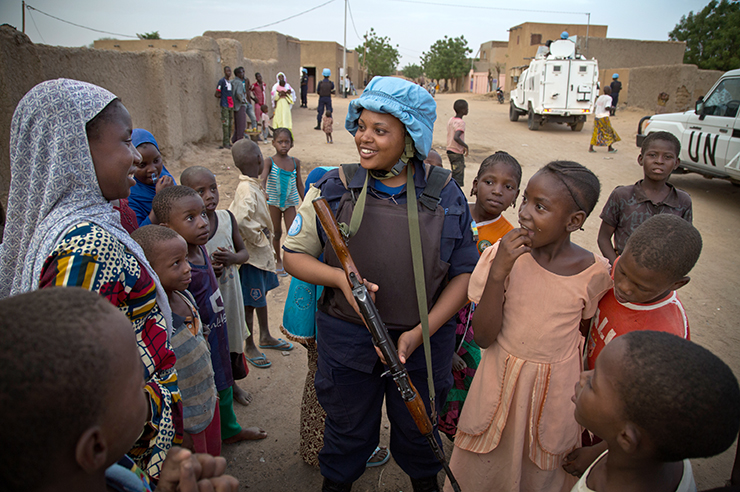 UN peacekeepers from Rwanda patrol the city of Gao in northern Mali. The presence of peacekeepers in the country has probably prevented genocide
© Marco Dormino/UN Photo

As the Sahel becomes Sahara

What happens when habitable land is lost? What can be done to alleviate the consequences?

The UN deploys peacekeepers to 15 locations around the world. Eight of those missions, including the five largest ones, exist in a belt across northern sub-Saharan Africa: in Western Sahara, in Liberia, in Mali, in the Central African Republic (CAR), in the Democratic Republic of Congo, in Darfur, in Abyei and in South Sudan.

Collectively these missions represent over 80 per cent of the UN’s budget and personnel for peacekeeping and, as a consequence, the lion’s share of the UN’s overall investment in peace and security Why? What makes this particular crescent of the world so particularly in need of the UN’s resources and attention?

There are, of course, a multitude of reasons in each case and in no single instance was climate change the primary cause. However, it is certainly a contributory factor common to every single situation.

In recent years drought, desertification and soil loss have seen the Sahara creep south into the Sahel, and the Sahel in turn creep south into the Sudanian Savanna. Scarcity has followed, exacerbating existing power imbalances and providing an incentive to act upon longstanding grievances, as inequality shifts from being a matter of justice to one of future security, and potentially one of existence. States’ confidence in economic growth and stability falters, and they seek out the plunder and insider unity that conflict brings.

Meanwhile apocalyptic cults (in Congo and Mali) and secessionist groups (in CAR and the Sudans) alike become more appealing, as the disincentives to instability become less readily apparent. Young men (and increasingly women too) with less to lose and less to farm see fewer reasons not to take up arms. Much as Bambang Susantono has argued in his article on Asia, in northern sub-Saharan Africa global warming hasn’t yet directly caused wars, but it has provided a more hospitable climate for them.

It is a phenomenon that could well creep yet further south. Northern Nigeria and the greater Lake Chad basin, Eritrea and Kenya have all demonstrated the existence of risk factors identified in the UN’s framework of analysis for atrocity crimes. It seems likely therefore that the stresses on the UN’s peace and security apparatus are only going to increase, particularly in this region. Yet at the same time powerful forces, led by but not limited to the United States, are keen to reduce the size, scope and, notably, costs associated with UN peacekeeping.

Peacebuilding initiatives
Thus far the Secretary-General has been looking for the solution ‘upstream’. By investing in mediation and pre-emptive peacebuilding initiatives, such as enhanced and strengthened political missions, he is hoping to reduce the need for future expensive peacekeeping missions. This logic is sound, and were the situation static such an approach would doubtless be effective. But as the Sahel turns into the Sahara he may find these efforts going against a tide of sand.

Additionally, mediation and political missions are not a like-for-like replacement to peacekeeping. The approaches serve subtly different purposes. Political missions may be able to substitute for peacekeeping when it comes to preventing a return to war, but that is increasingly a secondary purpose of modern missions.

Lessons learned
When it comes to ‘peacebuilding’ – the reconstruction of sustainable mechanisms and infrastructure for a long-term reduction in violence – and the prevention of atrocities, there is no obvious substitute for UN peacekeeping missions.

The record of UN peacekeepers on both fronts is mixed but improving. A recent study by the Rand Corporation, The UN’s Role in Nation-Building, found that UN peacekeepers outperform unilateral and/or military interventions when it comes to state-building.

As for preventing atrocities, peacekeeping has learned the lessons of Rwanda and Srebrenica rather better than its political masters. Modern missions have the mandate and resources those missions lacked. What they don’t always have is a Security Council with the foresight to deploy them ahead of the outbreak of violence.

Granted, the record is far from flawless. Too often, Member States fail to provide the UN with sufficiently trained and equipped troops. The UN internal investigation into violence in Juba in 2016 found that a force of some 19,000 peacekeepers were unable to protect civilians from atrocity crimes that took place just one mile from their base, yet a small handful of private security contractors were.

A few hundred willing and capable troops could perform a more useful function than many thousands of peacekeepers who lack the skills or motivation, and would also be a good deal cheaper. However, elite troops with the skillset required to perform this role are in short supply. Many hail from nations who have not been enthusiastic about volunteering them for UN duty.

Nevertheless, UN peacekeepers have, in all probability, prevented genocide in CAR and Mali, and significantly reduced the number and nature of atrocity crimes in many other countries. Few missions have come in for as much criticism as UNAMID – the joint African Union and UN mission to Darfur – and yet even in Darfur the value of the mission is clear. As a teacher in North Darfur told Waging Peace in a report UNA-UK co-authored: “The bottom line is that the force can still manage to save some lives and protect some of the population from rape and torture, as well as report atrocities.” Another Darfuri, in conversation with the International Refugee Rights Initiative, was even more succinct and gave them the title for their report: “No one on the Earth cares if we survive except God and sometimes UNAMID.”

Peacekeeping should therefore continue to play a role in the region for some time to come, and we would do well to maintain a sense of perspective about the cost. Around $7 billion a year may seem like a lot, but it represents just 0.5 per cent of total military spending globally. It pales into insignificance when compared to the other costs of what broadly should be considered climate change adaptation and mitigation. Smoothing the transition?
But is peacekeeping a tool for adaptation? Partly it depends on what we need to adapt to. If the Paris Agreement is successful then temperatures will rise by about 2°C over the next 80 years and then hold steady. In the short term that would see desertification continue and increase, and both the Sahara and Sahel move southwards.

In the long term there is no consensus: the situation could stabilise with new southern boundaries; or feedback effects could see the region rendered a largely uninhabitable extreme desert; or warming temperatures could see a reversal of the monsoon cycle and the region actually becoming more fertile. If warming cannot be held to 2°C then the region is much less likely to remain habitable.

The UN therefore needs to support the region to go through – at the very least – decades of relative resource scarcity and a permanent shift in geographic resource allocation (which will lead to political, social and cultural tensions, which are likely to spill over into multiple conflicts) and – at most – the organised evacuation of most of the region (and other parts of the planet to boot). While the latter would require a completely new global politics of migration and asylum, and Herculean work by the already overstretched UN High Commission for Refugees, peacekeeping could provide part of the answer to smoothing out the bumps and tensions of a less radical transition.

This cannot happen in isolation. Conceptually, peacekeepers don’t end conflict. They impose order but, as Stathis Kalyvas has argued, order is not the opposite of violence but simply a form of formalised violence. Thus, peacekeeping provides a mechanism for de-escalation by formalising conflict and so legitimises and cements post-conflict power relations. But if those power relations remain exploitative, unjust and unequal then the ingredients for future conflict remain.

Peacekeeping is not peacemaking, and while it can smooth the transition that climate change will bring it will not, by itself, provide a just post-warming settlement for the region.

An (expensive) ongoing peacekeeping presence or investment in robust institutions may keep the lid on hostilities for a while. But as the Sahara grows ever larger, pressure will build and tensions will climb ever higher, eventually reaching bursting point along familiar fault lines. This is unless a process of development and, crucially, a more equitable politics enables the creation of a sustainable regional society better able to adapt to a warmer, dustier, future.

Peacekeeping can buy time, and curb the worst excesses of human behaviour. But, in the long term, if desertification is not brought to a halt, and if existing resources are not allocated more equitably, then the Sahara will push a wave of conflict before it as it marches southwards.