Science-based targets take companies beyond good intentions and towards concrete commitments to operate within a 2°C pathway. With early adopters showing the clear benefits for both business and planet, we must encourage rapid widespread take-up to reduce GHGs 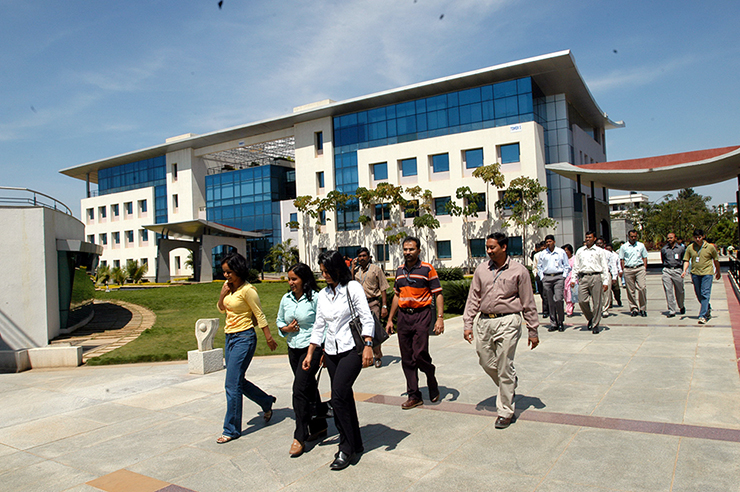 The Wipro campus in Bangalore, India. The IT company, which employs more than 160,000 people worldwide, has committed to reducing its scope 1 (direct) and 2 (indirect) GHG emissions by 48 per cent by 2030, and scope 3 (supply chain) by 30 per cent, from a 2017 base year. © Deepak G Pawar/The The India Today Group via Getty Images

Science-based targets take companies beyond good intentions and towards concrete commitments to operate within a 2°C pathway. With early adopters showing the clear benefits for both business and planet, we must encourage rapid widespread take-up to reduce GHGs

According to the World Economic Forum’s Global Risks Report 2020, severe threats to the climate account for the top five long-term risks to humanity. Science tells us that global emissions must peak in 2020 to avoid catastrophic impacts from extreme weather, rising sea levels, massive crop loss and more.

Five years after the landmark Paris Agreement, governments are scheduled to meet in Glasgow in 2021 to put more ambitious national climate action plans on the table. The UK and France recently passed legislation to reduce greenhouse gas (GHG) emissions to net zero by 2050. Sweden and Norway have enshrined net zero by 2050 into national law. Yet this is only part of the solution. To curb global temperature rise, we need serious action from the private sector.

Setting science-based targets for success
Investors are waking up to the fact that the businesses that act now will be best placed to thrive in the future. More are asking the companies they invest in to do a better job of disclosing their climate risks and impacts. As Larry Fink, CEO of asset management company BlackRock, wrote in his 2020 letter to CEOs, climate change has become a defining factor in companies’ long-term prospects.

Science-based targets boost investor confidence because they are the most credible way of demonstrating that a company’s ambition is aligned with the long-term global climate goals.

Another benefit is brand reputation. Companies need to be leaders on the climate issue to have a social licence to operate in many markets where they sell their products. Grassroots movements worldwide, such as the youth climate movement led by Greta Thunberg, are bringing more attention to the climate issue. Customers and employees are becoming more vocal about wanting the companies they buy from and work for to act responsibly.

Setting science-based targets also helps companies unlock innovation, giving them a competitive edge and leading to the creation of new products and solutions to increase efficiency. For example, in response to their targets, German building materials company HeidelbergCement is improving energy efficiency, increasing the use of alternative fuels and alternative raw materials, and investing heavily in research and development into new products and technologies for capturing carbon.

One of the most promising such technologies they are investigating is recarbonation, the process of capturing carbon from the production of new cement and binding it into recycled concrete from demolished buildings. For this option to work at scale, certain barriers need to be overcome. These include the lack of a clear recycling system for concrete from demolished buildings and lack of regulations around recarbonation of recycled concrete.

The rise of science-based targets
Five years ago, in the run-up to the landmark Paris climate conference, the Science Based Targets initiative (SBTi) was launched. The initiative, a collaboration between CDP, the United Nations Global Compact, World Resources Institute (WRI) and WWF, mobilises companies to set science-based targets and boost their competitive advantage in the transition to the low-carbon economy. It defines and promotes best practice in science-based target-setting, independently assesses companies’ targets, and provides companies with resources and support.

Today, more than 840 companies spanning 46 countries and 45 sectors, ranging from chemicals to construction and textiles to telecom, have committed to set science-based targets. Together, their operational emissions total more than one billion tonnes of CO2e, comparable to the annual emissions of Brazil. Their combined market capitalisation is over $10 trillion. Over 345 of these companies have already had their targets approved, putting them on track to reduce emissions by more than 265 million tonnes of CO2e, similar to shutting down 68 coal-fired power plants.

These companies are driving systemic change throughout the global economy. They are demonstrating that operating within the scientific thresholds for a climate-safe world goes hand in hand with running a successful business.

As the initiative has snowballed into a global movement, science-based targets have become standard practice in some sectors and geographies. More than 20 per cent of high-impact companies (in terms of emissions and market capitalisation) in the following sectors are setting science-based targets: apparel, biotechnology, food and beverage, healthcare, hospitality, information technology, pharmaceuticals and telecommunications.

First movers from high-emitting industries like cement, steel, chemicals and automobiles are also now having their science-based targets approved, sending a clear signal that industry-wide transformation is underway. Companies in heavy industrial sectors contribute significantly to global GHG emissions, and are therefore, more than others, challenged in lowering carbon production without new technology or innovation.

Governments therefore can significantly reduce emissions by creating the right conditions, policies and incentives to support them.

Accelerating the ‘ambition loop’
Despite the rapid adoption of science-based targets, there is a long way to go. While at least 20 per cent of high-impact companies headquartered in Finland, France, Denmark and Japan have set science-based targets, only a few in emerging markets have done so. There is an urgent need to pick up the pace in these economies, which are expected to drive global growth in the future.

This requires business and government leaders to work together to kick off what we call an ‘ambition loop’, a cycle in which ambitious government policy and private-sector leadership reinforce each other and take climate action to the next level.

Ambitious corporate action helps to send strong market signals and should give governments confidence to urgently ramp up their national climate plans. This will in turn give business the clarity and confidence to invest decisively in the zero-carbon economies of the future.

The programme has been effective at growing the number of Japanese companies with approved science-based targets, now at more than 60. By stepping up with leading mitigation targets, Japanese companies are providing a foundation for the government to set more ambitious policies and regulations. These efforts can be straightforwardly replicated in other countries seeking to kickstart the transition towards ambitious long-term climate goals.

In 2020, countries can accelerate the ambition loop by putting forward more ambitious national climate commitments under the Paris Agreement. Bolder pledges and supporting policies will give businesses greater clarity and confidence to invest in climate solutions – driving growth, creating jobs and ensuring a brighter future for us all.