Securing future energy supplies to meet the demands of growing economies is compatible with a sustainable approach to energy creation, but will require bold new thinking from policymakers 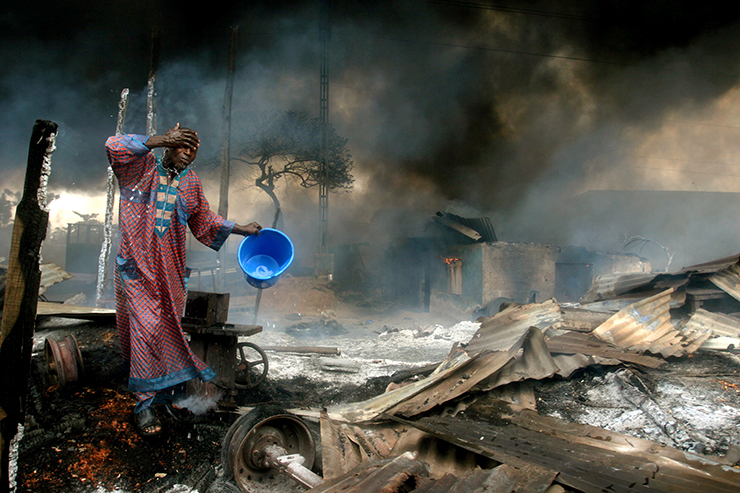 The demand for energy can come at a high human and environmental cost: the aftermath of a pipeline explosion near Lagos, Nigeria, caused by a failed attempt to siphon fuel from the pipeline.  © Akintunde Akinleye/Reuters

Securing future energy supplies to meet the demands of growing economies is compatible with a sustainable approach to energy creation, but will require bold new thinking from policymakers

Energy security is fundamental to the health of our economies. Predictable and reliable access to affordable energy, in whatever form, is critical to ensuring industrial productivity, health and wellbeing, and national security. As such, maintaining energy security requires that a country, or a group of countries with common interests, be vigilant and prepared for disruptions that are difficult to predict, whether caused by political instability, market volatility or natural disasters.

Yet there is one threat to energy security that is almost entirely predictable: climate change. The give-and-take relationship between climate change and the energy sector is undeniable. The energy sector contributes to around two-thirds of global CO2 emissions, while extreme weather events (and even gradual climatic shifts) are already impacting the efficacy and efficiency of energy infrastructure.

Despite such threats, the world is still not on track to meet the collective goal of limiting average global temperature rise to 2°C. In fact, if we continue along our current path, with today’s policies or even those agreed for implementation, models suggest an increase that is more likely to be between 3°C and 6°C.

Compounding this is the inescapable reality that more than one billion people worldwide currently lack access to electricity. Eradicating the scourge of energy poverty is a moral imperative. But there could well be harmful repercussions for the climate if in the process of expanding access to energy we pass along the same habits of wasteful energy consumption that exist in some economies.

We must not be disheartened, however, for the goal is not necessarily out of reach. In fact, the means of meeting the goal are well known, and many of the technologies, policies and mechanisms needed to get there are available and well understood. These include not only renewable energy but also increasing energy efficiency, investing in technology such as carbon capture and storage and, fundamentally, eliminating fossil-fuel subsidies and putting a price on carbon.

These are the pieces of the puzzle. What’s missing is a systemic, holistic approach that takes advantage of the relationships between climate, energy, economic growth and security. Too often, the discussion on climate is framed as a zero-sum game, with arguments that suggest actions taken to reduce emissions are somehow destined to harm economic growth or energy security. This simply isn’t the case.

In fact, there are strong indications that global CO2 emissions from the energy sector stalled in 2014, while the global economy expanded by three per cent. That would make it the first time in 40 years that there was a halt or reduction in emissions of this greenhouse gas that was not tied to an economic downturn. However much this may be good news – and it may be very good news indeed – it should not be taken as an excuse to delay further action. Rather, it should be taken as an early indication that the decoupling of energy use, economic growth and emissions is possible.

Smart policy
There is a role for smart policy that can simultaneously encourage action on climate while maintaining, and even increasing, energy security – key elements of the low-carbon energy transition. It starts with simply using less energy. Policies such as carbon pricing, combined with the phasing out of fossil-fuel subsidies, can encourage consumers to limit their demand.

The benefits of reduced demand can be reinforced further through targeted increases in energy efficiency. This strengthens energy security by reducing demand, and carries with it multiple positive benefits for economies and societies in general, including lower emissions, greater industrial productivity, improvements in health and wellbeing, and additional disposable income.

Critics have argued that increased energy efficiency can actually lead to greater energy use, the so-called rebound effect. To a certain degree this may be the case. However, analysis by the International Energy Agency (IEA) suggests that this effect is generally small and the result is still a net decrease in energy use. At the same time, this argument ignores a more fundamental issue: energy efficiency measures result in cost savings as well as energy savings. When a low-income family saves on heating bills, it has more money to spend on other needs, such as education or health. This certainly isn’t a bad thing. Likewise, when industries become more efficient, they may become more competitive and increase production. Energy saved becomes money that can be channelled back into the economy, resulting in benefits for everyone.

The end goal is to move towards low-carbon sources of energy. In the immediate future, natural gas can play the part of a transition fuel that reduces emissions while offering diversification options that increase energy security. This is one of the main drivers behind plans by the EU to form an Energy Union. By building and strengthening a competitive internal gas market, while encouraging investment in renewable energy at the same time, the region seeks to increase its ability to shield itself from political instability along its borders and take concrete steps to meet its stated emissions-reduction targets.

Eventually, transition fuels must give way to greater deployment of even lower-carbon energy sources, including nuclear power and renewable energy. Though many countries and regions have made dramatic and impressive progress on this transition – in large part due to hydro, solar photovoltaics and wind power – low-carbon energy sources still make up less than one quarter of total power generation, according to the IEA’s Medium-Term Renewable Energy Market Report 2014.

Despite calls for renewables to take on a greater share of the energy mix, market distortions, partly in the form of fossil-fuel subsidies, continue to stack the odds against them. Removing such distortions, combined with supportive policies and a price on carbon, would allow renewables, and in some cases innovative technologies such as carbon capture and storage, to compete. Indeed, the most important factor for low-carbon energy is not price, but rather the stability and predictability of the policy and market frameworks necessary to encourage the generation of necessary capital. This is what is needed to secure investment for a stable and sustainable low-carbon energy system – a precondition for meeting collective climate goals.

As the countries of the world gather in Paris for COP21 later this year, there is an opportunity to not focus simply on emissions reductions, but to have an expanded discussion on how the energy transition intersects with climate change. This encompasses a vast variety of issues, ranging from supply disruptions due to extreme weather events to the innovation unleashed from smart, targeted investment in sustainable and efficient technologies – all of which have implications for energy security.

For now, the outlook for these negotiations remains unclear. Only a handful of formal emission-reduction plans have been submitted to the UN, including by the EU, Gabon, Mexico, Russia and the United States. Despite announcements, the world has yet to see a formal plan from many major emitters, including Brazil, China and India.

Though facing very different challenges, be they environmental, economic, political or social, all of these countries share the goal of maintaining and strengthening energy security. The intersection of these aspirations, challenges, threats and opportunities is the climate energy nexus. This is where we will find realistic solutions that recognise the world’s insatiable thirst for energy and economic growth, while acknowledging the fundamental impact of the energy system on our world’s climate.