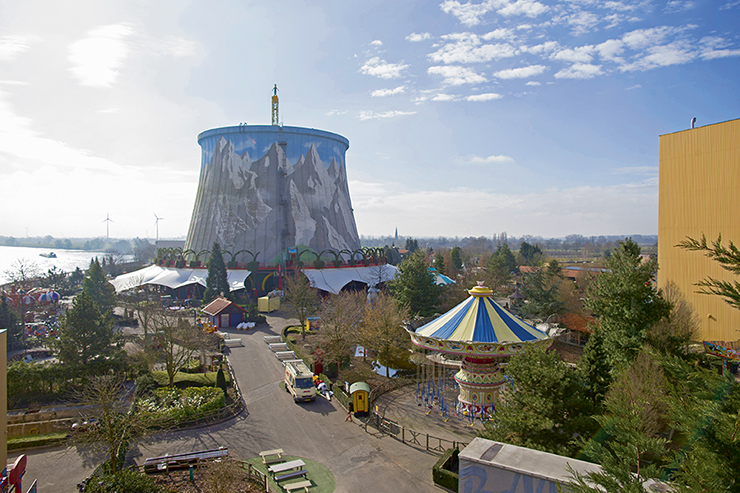 An amusement park in Kalkar, Germany, built on the site of a nuclear power plant that never entered service. The German phase-out of nuclear, due to safety fears, meant that they did not reduce GHG emissions between 2011 and 2015 despite massive investment in renewables.  © 2016 Bloomberg Finance LP

Since the beginning of the 20th century, nations have expressed concerns over their energy security. Energy provision today plays a fundamental role in the economy and in people’s everyday lives: energy services are needed to power modes of transport, light factories and workplaces, cultivate food, manufacture and distribute products, and cool and warm residences.

In many industrialised nations, it is seen as imperative that the energy system can deliver affordable energy in the volume required at any given moment, and politicians are wary of the threat to their political legitimacy in the event of energy shortages or severe spikes in consumer  fuel price.

More recently, it has become apparent that the way in which we produce and consume energy will need to fundamentally change if we are to avoid potentially catastrophic climate change. Various policies and regulations to restrict greenhouse gas emissions are now becoming commonplace across the world, and the recent Paris Agreement signalled the willingness of the international community to work together to cut carbon emissions.

However, this has created an additional complication to the challenge of providing secure, affordable energy supplies, and there may be some unavoidable trade-offs between climate and energy security goals.

For example, nuclear power has extremely low carbon emissions, but raises numerous potential security concerns including investment uncertainty, public opposition, nuclear waste management and, in some countries, the danger of nuclear weapons proliferation. Renewables such as wind and solar are clean and waste-free, and costs are decreasing rapidly. But these sources of power are intermittent, which makes it much more challenging to ensure that adequate electricity supply is available when and where it is required.

Finally, biomass could provide flexible low-carbon electricity, heating and transport, but there are major uncertainties regarding costs and sustainability. The international feedstock market is in its infancy, making it difficult to predict and mitigate potential future trade risks.

Part of the reason that trade-offs exist between climate change and energy security goals is the issue of timescale. Climate change is a long-term, global stress on the energy system, whereas threats to energy security may create very immediate local impacts such as fuel price spikes or electricity shortfalls. This means that historically, policymaking has tended to subjugate climate concerns to short-term energy security fears.

For example, a considerable number of large economies around the world (including Australia, Canada, China, Germany, India, Poland, Russia, South Africa and South Korea) remain heavily dependent on coal to meet domestic energy demand or for export purposes, despite the incompatibility of mining and burning coal with carbon reduction goals. Meanwhile, nations such as Canada, the UK and the US are pursuing the extraction of new forms of unconventional oil and gas, notionally because of concerns about the security of imported fuels.

However, a crucial aspect of energy security (and one that sets it apart from climate change) is that there is no agreed-upon means of maximising it. Fears about energy security tend to be so salient in the minds of the public that the term ‘energy security’ is frequently used by policymakers to justify various policies that may even be contradictory.1,2

Developing strategies
The fossil fuel policies described above focus on reducing reliance on imports. However, there is little evidence that imported fuels are necessarily less secure than domestically produced ones,3,4 and the potential benefits of international cooperation and mutual dependency tend to be played down. For example, exploiting indigenous resources of unconventional fossil fuels often results in significant delays and uncertainty caused by public opposition, which may be just as much of a threat to a nation’s energy security as potential threats arising overseas.

In the longer term, failure to mitigate climate change could result in serious physical risks to energy systems, as well as investment risks from failing to keep up with increasingly stringent environmental regulations. Developing energy strategies that have a holistic view of energy and climate risks is an ongoing challenge, but one that could generate synergies and advantages in multiple areas.

For example, eastern European countries are expanding their use of renewables and reducing their energy demand, which can reduce coal usage at the same time as avoiding over-reliance on Russian gas. A strategy of increasing power production from renewables also tends to increase the diversity of the energy mix, which can act as a hedging mechanism against unpredictable energy security risks.

Importantly, it is crucial to avoid focusing efforts to improve energy security on the supply side. Demand reduction can generate co-benefits by improving energy security and affordability while reducing environmental impacts. Furthermore, gas and electricity networks are consistently undervalued in terms of their impact on energy security. Experiences in Germany have shown that without significant and timely investment in electricity networks, transmission bottlenecks arise and renewable generation is curtailed.

Efficient expansion of the networks can facilitate sharing of electricity and gas across wider geographical areas, which can significantly improve resilience and can help to integrate intermittent renewables onto the electricity system. Energy security strategies often focus narrowly on trying to predict and avoid causes of insecurity (for instance by reducing fuel imports). However, it is also crucial to create systems which can respond to energy security threats, for instance by increasing system flexibility and resilience.5

It is also important to recognise that energy security and carbon reduction are about actors and policies as well as technologies and markets. For example, significant energy security threats may arise from public opposition to new infrastructure, an issue which is often overlooked in energy security strategies. Making deep cuts to carbon emissions may also require active behaviour change on the part of consumers, for instance by switching to electric vehicles or reducing peak electricity demand. Finally, and most importantly, secure, low-carbon energy systems will only be realised if sufficient investments are made in energy infrastructures.

Policies should work to maximise investor confidence, both from the traditional large utilities and from emerging new business models such as community schemes. This includes avoiding making sudden or unexpected policy decisions, and recognising that a change in policy aimed at a single technology will impact investment across the system. This was demonstrated by the drop in investor confidence in the UK following the sudden withdrawal of funding for carbon capture and storage.

Improving energy security while simultaneously cutting carbon emissions is a highly challenging goal, and it is important to recognise the reality that there may be numerous trade-offs between different objectives. Nevertheless, certain synergies may also be possible, for example by pursuing ‘low regrets’ options, such as demand reduction, and by building flexible, resilient systems that can respond to unpredictable threats. The imperative to mitigate climate change creates new challenges, but also new opportunities for secure and sustainable energy systems.