Hurricanes have taught Americans hard lessons about safeguarding communities before, during and after an extreme weather event. What can the rest of the world learn from the US experience? 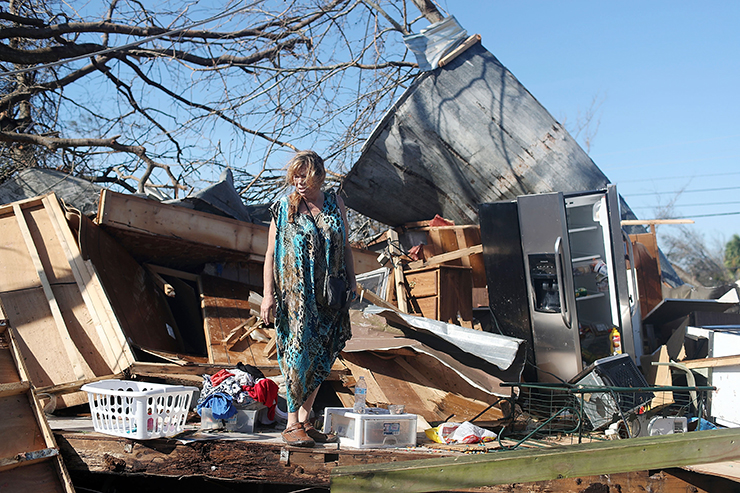 A resident of Panama City, Florida, surveys the remains of her home after it was destroyed by Hurricane Michael © Joe Raedle/Getty Images

Hurricanes have taught Americans hard lessons about safeguarding communities before, during and after an extreme weather event. What can the rest of the world learn from the US experience?

Michael, Florence, Harvey, Irma, Maria, Sandy, Katrina… these friendly names have acquired a hard edge. Together, these hurricanes have created more than half a trillion dollars in damage and caused the deaths of at least 5,210 people. Climate change is making such devastating storms more likely and more destructive, by adding heat to the atmosphere and seas. Storms are powered by heat: the more heat there is, the more powerful storms can become (and the more likely they are to develop).

According to the 2017 National Climate Assessment, the United States is already experiencing more hurricanes due to global warming, as well as more heatwaves, heavy downpours, floods and droughts. Indeed, 2017 marked a sobering record for the nation: 16 disasters cost more than a billion dollars each, resulting in more than $300 billion in damage in all – more than in any other previous year. The number of ‘billion-dollar’ disasters (after adjusting for inflation) is rising. Between 1980 and 2012, the US experienced an average of 5.3 such disasters per year. In the last five years (2013 to 2017), the average jumped to 11.6 per year. The current year is, sadly, shaping up to be just as devastating, with 11 billion-dollar weather disasters as of mid-October.

The facts are clear: the United States is experiencing more climate disasters and the country needs to do more to protect its citizens. With four out of ten Americans living on the coasts, the country is particularly vulnerable to ocean storms. Making coastal communities more resilient is critical. It’s also financially astute: it’s much cheaper to invest in resilience than to rebuild. Government-commissioned studies by the National Institute of Building Sciences found that every dollar invested by the federal government in adaptation measures provides $4 to $6 in future benefits. Some experts even estimate that the benefits are closer to $10 for every $1 invested, when you take into account insurance costs, property loss and other factors.

Investing in resilience aligns with sustainability goals, such as the 17 Sustainable Development Goals (SDGs), adopted by world leaders in 2015 and meant to be achieved by 2030. Two examples are SDG 9 (industry, innovation and infrastructure) and SDG 11 (sustainable cities and communities). Both prioritise making cities and their infrastructure more resilient and sustainable.

Resilience is a core element of our work at the Environmental and Energy Study Institute (EESI). Through a multi-year Congressional briefing series, Building Resilient and Secure Infrastructure, we are focusing attention on federal investment in adaptation and resilience measures to make extreme weather events less devastating. We’re also pushing for smarter and stronger rebuilding, so that communities are better prepared for the next disaster. US coastal communities have learned several lessons and best practices from past hurricanes, and we are sharing those lessons far and wide. Indeed, planning and coordination among local, state and federal agencies has been shown to be an absolute ‘must’.

The need for better land use and green infrastructure
The best way to protect buildings in vulnerable locations is not to build them there in the first place. Naturally, the wholesale move of communities is usually not practical. But when communities have been devastated by a disaster, it is worth considering whether it makes sense to rebuild them in the same place. Governments can help ensure proper land use by developing better risk mapping and analysis tools. Local communities need detailed, up-to-date maps that properly reflect the risks of flooding, preferably at the level of individual properties.

Some US communities, particularly in the north-east, have reconverted ravaged coastal lands into natural buffers against the sea. Green infrastructure such as wetland restoration, rain gardens, green roofs and permeable pavement help absorb storm surges and rainwater, thereby reducing flood risks. And many of these projects also help sequester carbon (as plant matter), keeping it out of the atmosphere where it would contribute to climate change.

The need for strong building standards
Hurricane Andrew was an eye-opener in the United States. In 1992, it destroyed 28,000 homes and caused $26.5 billion in damage in south-east Florida. Local authorities have since made their building codes much tougher.

The Federal Emergency Management Agency (FEMA) has said that “disaster resilience starts with building codes” and is now encouraging local communities throughout the US to adopt up-to-date codes and enforce their application. The Insurance Institute for Business & Home Safety (IBHS), a non-profit research organisation, has developed the FORTIFIED home standard, which puts a particular emphasis on roofs. Indeed, one of its executives notes that, “without a roof, a house is a bucket waiting to be filled with water”.

As an added bonus, resilience often goes hand in hand with efficiency. Analysts have found that homes built to be more energy efficient (with strong, leak-resistant windows) are more resistant to high winds, requiring fewer repairs after storms.

We know how to make strong buildings that can endure disasters, but we aren’t always prepared to pay the price for them – even though it’s more cost-effective in the long term. The Obama Administration estimated that more stringent standards for federal buildings would increase construction costs by 0.25 to 1.25 per cent, but the more durable buildings would save taxpayers money in the long run. For homeowners, even inexpensive reinforcements (such as extra nails or special metal connectors) can make a big difference. In many cases, fortified homes will pay for themselves through lower insurance premiums and utility bills.

The need for robust public shelters
Making all existing buildings in a community more resistant to extreme weather can be cost-prohibitive. In many cases (especially in poorer communities), the best solution is for residents to seek refuge in fortified public buildings, such as community centres, medical centres, schools or universities. Public officials should ensure that such buildings are indeed capable of resisting extreme weather and can accommodate large numbers of people during emergencies.

Moreover, governments should lead by example, and follow best practices to make their buildings and infrastructure as resilient as possible.

Hurricane Katrina, which struck New Orleans in 2005, demonstrated that buildings being used as refuges must not only be protected from storms, but also from the weaker buildings around them. During the hurricane, many sought shelter in the Superdome, a sports stadium. It was resisting well, until the windows in a nearby high-rise hotel all shattered. The shards penetrated the Superdome’s roof, making it possible for the storm’s winds to rip it off, leaving those inside exposed to the weather.

The need for a resilient, decentralised grid and other critical infrastructure
Most Americans take electricity for granted. We flip a switch and voilà: instant refrigeration, heating, cooling, communications and so on. But Hurricane Maria showed us that taking electricity for granted can be deadly. The long-lasting blackout it caused may have led to more than 1,500 deaths in Puerto Rico – a US territory, according to Harvard researchers. With life-saving equipment and air conditioning units inoperative, the sick and elderly became even more vulnerable. Thousands more lives were lost in the months following the hurricane than during the actual storm.

The solution is clear: microgrids, smart grids, renewable energy and storage systems. These can provide resilient power to communities, making them less dependent on vulnerable central power stations and transmission lines. When midtown Manhattan was shrouded in darkness during superstorm Sandy, New York University was able to keep most of its lights on thanks to an independently powered microgrid. Once again, there is an extra benefit to investing in resilience: making electricity supply and distribution more resilient often is less carbon intensive and more efficient.

The need for resilience extends to other critical infrastructure as well, such as roads, bridges, airports and sewer and water systems. Resilience isn’t only about surviving a disaster. It’s also about getting back to a normal life as soon as possible following a disaster. By hardening critical infrastructure, communities can prevent population displacements and devastating financial losses that make it harder for a community to return to normal.

Some argue that talk of adaptation and resilience will detract from the underlying need to stop releasing greenhouse gases. While reducing our emissions is critical, sadly, we are already experiencing significant impacts of climate change. We must act to protect ourselves now, which means tackling mitigation and adaptation simultaneously.