Suing for the future

Can the courts force governments to act on climate change? 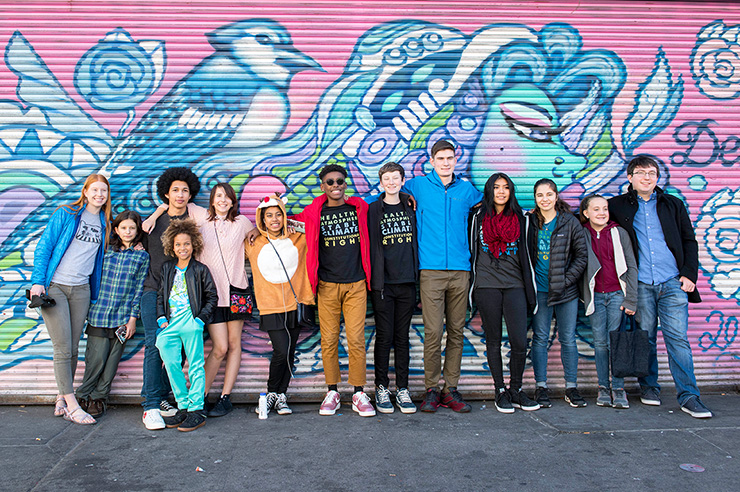 Suing for the future

Can the courts force governments to act on climate change?

By David L. Faigman , Chancellor and Dean and John F. Digardi Distinguished Professor of Law, University of California Hastings College of the Law

A fundamental, perhaps the fundamental, challenge of our time is climate change. Along with nuclear proliferation and financial stability, it is an issue of global proportions and, in the end, requires global solutions. Indeed, as evidenced by the Paris Agreement, it is a problem that nearly every nation in the world understands and is committed to confronting.

The United States is the most powerful nation on Earth, both economically and militarily. Currently, however, two out of three branches of the United States government – the legislature and executive – are controlled by politicians that are in abject denial of the pending global climate crisis. This raises the question of whether the third branch of government, the judiciary, might yet step in and mandate action by the other two branches.

The cornerstone of the American constitutional system is the principle of checks and balances. In The Federalist, James Madison famously observed: “If men were angels, no government would be necessary. If angels were to govern men, neither external nor internal controls on government would be necessary.” Since men are not angels – and our governors surely are not – “the great difficulty lies in this: you must first enable the government to control the governed; and in the next place oblige it to control itself.”

In that same monumental work, Alexander Hamilton referred to the judiciary as “the least dangerous branch,” because it had recourse to neither the purse nor the sword. Given the political realities of the United States today, it is that least dangerous branch that is needed to address global climate change, surely one of the most dangerous threats facing humankind.

A judicial check on legislative and executive negligence
The founders of the American Constitution sought to embed checks and balances through two basic divisions of power. First, they divided sovereign authority between the states and the federal government, a principle known as ‘federalism’. The second involved the further division of the federal government into three branches – the legislature, executive and judiciary – a principle known as ‘separation of powers’.

Although both of these divisions of authority are relevant to efforts to make the US more responsive to combating climate change, federalism is less controversial as a matter of American history and tradition. States have always taken a leading role in responding to matters of sovereignty, and there is a long tradition of state/federal competition, combat and collaboration.

What is somewhat more controversial, especially in regard to problems of global reach, is eliciting the judiciary’s support to demand that the more political branches of the federal government live up to their responsibilities. In short, the great question is whether litigation might provide the impetus, indeed the demand, for the US to rejoin the world community’s efforts to save the globe.

Litigation as a route to broader change
Under the Constitution, courts are limited to deciding concrete cases arising under the laws of the United States. Courts are not legislatures and thus have no authority to regulate the polluters that contribute to the problem. Hence, it might indeed seem initially inappropriate for the courts to assume responsibility for what could be described as a ‘political’ issue, one necessitating a legislative or executive response.

But, in fact, American courts have a long history of considering, and seeking to remedy, broad and systemic wrongs under their constitutional authority. Perhaps the best example of this is the case of Brown v. Board of Education. In Brown, the plaintiffs claimed that segregated schools violated the Fourteenth Amendment’s guarantee of the equal protection of the laws. The Court agreed that segregation was unconstitutional and ordered schools to desegregate “with all deliberate speed”.

Although the Brown litigation ostensibly involved only five jurisdictions and their respective schools, the finding was broadly understood as applying to segregated schools nationwide. Indeed, the Brown ruling that school segregation was unconstitutional was subsequently, and largely summarily, extended to public facilities generally, including bathrooms, water fountains, pools and so forth.

The current signature case involving litigation over global climate change is Juliana, et al. v. United States, et al. The plaintiffs in the case are a relatively small number of minors who claim that global climate change has caused them substantial ongoing injuries and poses a significant risk of future injuries. Moreover, the Juliana plaintiffs argue, among other things, that the United States government has a constitutional obligation under the Due Process Clause of the Fifth Amendment to ensure a liveable and safe environment. This duty arises, in part, because the government has assumed stewardship responsibilities, through statutes and regulations, over the environment. In effect, the plaintiffs claim that the federal government has been negligent in carrying out its responsibilities to safeguard the lands, sea and air of the United States from the deleterious consequences of carbon dioxide emissions.

Juliana presents a number of interesting parallels to the Brown litigation. Like the Brown plaintiffs, the Juliana plaintiffs are members of a class that are injured by actions or omissions of the controlling authorities. In both cases, the plaintiffs did not seek monetary damages, but instead seek injunctive relief to remedy an ongoing constitutional violation. In Brown, the court did not specify how states should go about desegregating their schools, only that they must do so. The form desegregation should take was for states to determine. Indeed, the issue continues to be a source of litigation to this day.

There is yet another intriguing similarity between Brown and Juliana. The United States in Juliana has defended its position by, on the one hand, accepting the factual proposition that human-made climate change is scientifically grounded. On the other hand, it is arguing that the plaintiffs cannot show any particular injury from that consequence.

In legal-speak, the government asserts that the plaintiffs lack standing to bring their lawsuit and, if they do have standing, that they cannot prove that climate change has caused individual harms. Specifically, the government argues that while the number and intensity of storms, or the number and intensity of wildfires, have increased with climate change, the plaintiffs cannot prove that any one super storm, or any one wildfire, was specifically caused by climate change.

The government, however, is fundamentally mistaken in its strategy. Plaintiffs need not prove individual causation. The science proving general causation is sufficient in this constitutional claim. In Brown, for instance, although the plaintiffs introduced social science research indicating the deleterious effects of segregated schools on black children, the Supreme Court did not demand proof that the individual named plaintiffs suffered any of the deleterious effects of segregation. It was sufficient that they were in the class of individuals at risk for such demonstrated effects.

In terms of asserting a constitutional right, the Juliana plaintiffs are suffering the real effects of, and confront the continuing substantial risks associated with, global climate change. If there is indeed a fundamental right under the Fifth Amendment to a liveable and sustainable environment, the Juliana plaintiffs should prevail in their lawsuit.

An opportunity to be seized
The cornerstone principle of American constitutional democracy is that of checks and balances. A key manifestation of that principle is the separation of powers between the legislature, executive and judiciary. When one or another of the branches has failed to fulfil its constitutional obligations, it falls to the other branches to balance that failure.

Today, the two more political branches – the legislature and the executive – have failed in their constitutional responsibilities to adequately steward the environment. The judiciary now has the opportunity and the power to remedy those failures. It is time for the courts to fulfil their constitutional role.