China’s pursuit of economic growth has taken its environmental toll, with smog now a fact of city life. Can the world’s biggest carbon emitter keep growing without tipping the climate over the edge? 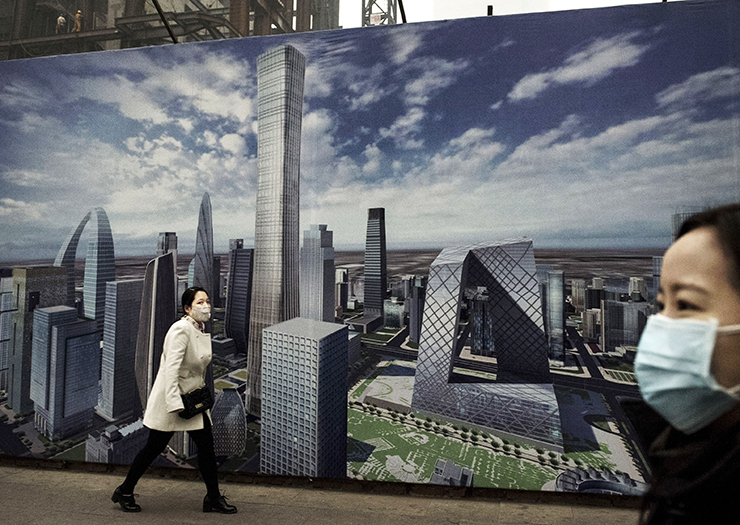 China’s pursuit of economic growth has taken its environmental toll, with smog now a fact of city life. Can the world’s biggest carbon emitter keep growing without tipping the climate over the edge?

By Isabel Hilton , journalist and broadcaster; CEO and Editor, chinadialogue

In March 2015, international news organisations reported some arresting remarks attributed to the head of China’s meteorological service, Zheng Guoguang. China’s temperatures, he warned, were rising faster than the global average and the country faced potentially disastrous climate impacts, including severe droughts and floods that, along with predicted higher temperatures, could threaten rivers, agricultural production and major infrastructure projects such as the Three Gorges Dam.

Zhang’s remarks were strikingly direct. Their substance has been understood by China’s government for a decade. Qin Dahe, Zhang’s predecessor, had previously pointed out that temperatures across the Tibetan plateau were rising four times faster than the global average, and that China’s densely populated east coast, with its important delta cities, is highly vulnerable to sea-level rise and salt water intrusion.

In 2005, as gross emissions from China’s rapidly expanding, coal-fired economy were about to overtake those of the United States, China’s leaders made a point of learning about climate change. Climate experts were summoned to brief the Communist Party’s Central Committee about climate science, and what a changing climate might mean for China’s economic future and international standing. As one climate expert put it at the time, the tallest tree attracts the wind. A China on the verge of becoming the world’s biggest emitter of greenhouse gases was in need of a policy response.

Slow start
China has been involved in international climate negotiations since they began. It is party to both the 1992 Framework Convention on Climate Change and the Kyoto Protocol.

When the Kyoto Protocol was being negotiated in the 1990s, China was just beginning two decades of spectacular growth and its leaders were in no mood to listen to warnings about the dangers of coal dependency or climate impacts. Nor were they obliged to – only developed states agreed to take on emissions reduction targets under Kyoto. Along with India and other emerging economies, China argued that, since developed countries had caused the problem, it was up to them to fix it. China was not going to put prosperity on hold.

Under the Kyoto principle of “common but differentiated responsibilities”, China was only committed to the so-called nationally appropriate mitigation actions – NAMAs in climate policy jargon. It also became one of the biggest beneficiaries of the Clean Development Mechanism.

In the early years of the 21st century, climate change barely registered in Chinese media. It was not until 2007, when China finally overtook the US as the world’s largest emitter and issued its first climate change policies, that the government ordered official media to begin a public education campaign on climate change.

The following year, China announced a pilot carbon trading scheme, began to close small and inefficient coal-fired power plants, and directed major investment to the development of wind power and the manufacture of solar panels. Today, China has the world’s largest installed wind and solar capacity, is planning a rapid expansion of its nuclear capability, is on the brink of launching its national carbon trading scheme and has promised to put a cap on coal by 2020.

China’s leaders, many of them trained engineers, had little difficulty in grasping the science, or in directing planners and policymakers to work through the implications for China’s future. But if climate scepticism was not an obstacle, effective climate action was nevertheless far from straightforward. China depends on coal for more than 70 per cent of its energy, vested fossil interests are powerful, and, internationally, a sense of historic grievance towards developed countries remains sufficiently strong that China cannot afford to seem weak in negotiations.

Strategic shift
China nevertheless began in earnest to plan for sustainable development in the preparation of the 12th Five-Year Plan, which came into effect in 2011. By then it was apparent that China’s carbon-intensive growth model would quickly run out of steam. Labour costs were rising, while high-investment, low-added-value, export-led growth was proving too costly in environmental and social terms and  was monstrously inefficient in its use of energy and raw materials. It was clear that if China was to avoid middle-income stagnation, there would have to be a strategic economic shift.

The 12th Five-Year Plan emerged as a blueprint for moving China, by then responsible for half of the world’s annual coal consumption, towards cleaner growth. It identified several key technology sectors for priority investment – including electric mobility, clean technologies and renewable energy – and mandated tougher energy efficiency targets.

China had signed up to a 2°C target in Copenhagen in 2009, but privately many climate experts believed that it was not achievable. More worryingly, they reported that the view in government was that three or four degrees of warming would be tolerable. At those levels, experts fear that warming will trigger feedback loops, such as massive methane release from thawing tundra that could render climate change catastrophic.

War on pollution
China has several climate policy problems. The Party’s priority is to maintain power, which dictates that it delivers ever-improving living standards. Delivering that prosperity demands energy, and local officials, whose promotions depended on headline GDP growth, were well disposed to energy-intensive industries and inclined to turn a blind eye to China’s poorly enforced environmental protection regulations.

The Ministry of Environmental Protection was too weak and under-resourced to prevail against the argument that China could develop first and clean up later. It was not until the consequences of coal dependency became inescapable in other ways that the government began to put some serious strength into the enforcement of its own laws and regulations.

Today, the choking smog that regularly blankets the cities of China’s eastern seaboard, and that takes six years off the life expectancy of people in north China, has become a toxic political issue. The Prime Minister, Li Keqiang, has declared a ‘war on pollution’ and the massive task of cleaning up China has begun. Coal use is to be capped and there is a rush to build nuclear and hydropower and to convert power generation to gas.

The 13th Five-Year Plan is now in the final stages of preparation, and its targets and goals will dictate what China brings to the climate conference in Paris in December. China now emits half as much again as the US. Even measured on a per capita basis, China’s emissions surpassed European levels for the first time in 2014.

China aims to become a fully industrialised, middle-class society by 2021 and promises that its emissions will peak by 2030 at the latest. The argument today is not about the need for climate action, but rather the manner in which it is executed. Should China grow rapidly to an early but high peak, then face deep cuts, or grow more slowly to a later but lower peak?

Policymakers outside China believe that a peak at 2030 is too late for the world to avoid dangerous climate change, and several recent reports have pointed to pathways that would allow China, theoretically, to move faster. Moving from theory to practice, however, would demand that China upgrade its economy; overcome opposition from vested interests, including its own powerful state-owned enterprises; effect an energy transition on a breathtaking scale; and bring in a robust system of environmental governance.

It’s a big agenda, even without the countervailing pressures of a slowing economy; concerns about energy, food and climate security; a shrinking water supply; and the perceived risk of domestic instability.

Despite a rapidly expanding renewable and nuclear sector, official projections put the non-fossil fuel share of all energy at only 20 per cent by 2030. China is paying the price of following the development model of countries that industrialised more than a century earlier, despite the fact that negative lessons were clear and available. It was only when large-scale contamination incidents threatened public discontent that the government began to take seriously questions around the quality of development, rather than its speed.

China’s willed dependence on coal has left a legacy of inefficiency and pollution from its energy, transportation and chemical sectors, and the failure to count the cost of pollution has hampered innovation and efficiency. Now the government hopes that the transition to low-carbon development will spur the necessary changes in both production and consumption.

Last year, China and the US signed a landmark climate cooperation agreement, and China promises to be more involved in global climate change governance and to assume ‘appropriate responsibilities’. The government is well aware of the risks. Whether it can act fast enough to avoid them remains to be seen.