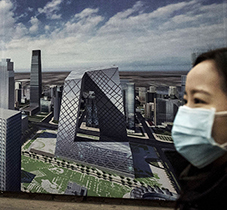 BEIJING, CHINA – NOVEMBER 29: A Chinese woman wears a mask as she walks passed a billoard showing the city on a clear day during heavy smog on November 29, 2014 in Beijing, China. United States President Barack Obama and China’s president Xi Jinping agreed on a plan to limit carbon emissions by their countries, which are the world’s two biggest polluters, at a summit in Beijing earlier this month. (Photo by Kevin Frayer/Getty Images)