Can technology enable us to switch to sustainable energy in time to avoid global climate catastrophe? What can we do to ensure innovation and mass adoption happens before it’s too late? 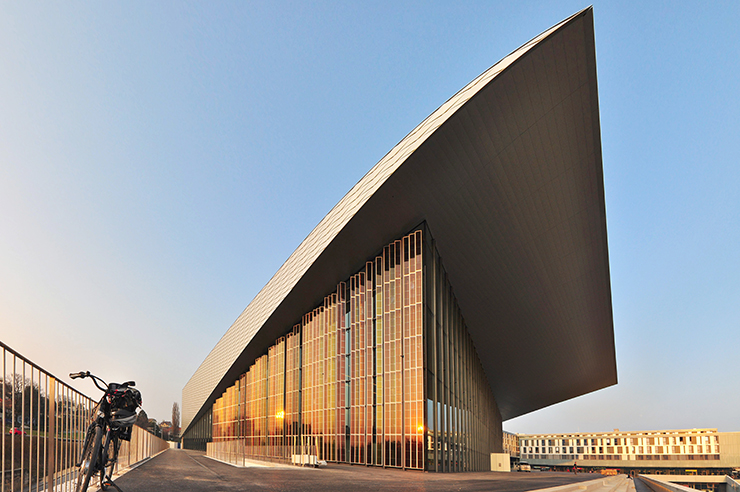 The SwissTech Convention Center in Lausanne, Switzerland. The facade shown is made with panels containing organic dye-sensitised solar cells, a new generation of photovoltaics with great potential. © Ramoul

Can technology enable us to switch to sustainable energy in time to avoid global climate catastrophe? What can we do to ensure innovation and mass adoption happens before it’s too late?

The promise of the Paris Agreement, which was signed in 2015 and entered into force in 2016, lies in its premise that countries will periodically ratchet up their commitments to reducing their greenhouse gas emissions. So even though countries’ existing commitments under Paris may not be strong enough to avert catastrophic climate change, future commitments might be.

New and improved clean energy technologies can entice countries to pledge much more stringent commitments. But whereas commercialising such technologies will require rising levels of investment in clean energy innovation, funding has been shaky over the last decade. Although there are some bright spots, most of the technologies needed to produce and use clean energy more cheaply and efficiently are progressing too slowly to transform the global energy system on the timescale needed to confront climate change.

Public policy can change that. At home, countries should invest in research, development and demonstration of new technologies – not only to stock new weapons in the world’s arsenal to combat climate change but also to seize a share of the growing clean energy economic pie. And abroad, countries should cooperate on fostering innovation and setting standards to speed the introduction of new technologies.

Thanks to falling costs, solar panels and wind turbines have attracted substantial investment in their deployment. But they only work when the sun shines or the wind blows. As batteries get cheaper, they can help store renewable energy for a few hours. But they will remain far too expensive to smooth out the variation of solar and wind over days, months and even seasons.

All this means that claims of the cost-effectiveness of running the power grid off 100 per cent renewable energy are mostly hype. Recently, I co-authored an article with 20 leading energy researchers in the Proceedings of the National Academy of Sciences debunking one of those claims.

But a suite of new and improved clean energy technologies could mount a more realistic challenge to fossil-fuel dominance. Next-generation nuclear reactors could be meltdown-proof, cheaper and more efficient than today’s reactors. Recently invented solar coatings have the potential to be as cheap as paint. More energy-dense batteries and other energy storage technologies could enable long-range electric vehicles and help grids cope with intermittent renewable energy. Much more efficient air conditioners could curb skyrocketing energy demand as the ranks of the middle class swell in the developing world. Technologies to capture and store carbon dioxide could make it possible to keep using a limited amount of fossil fuels without warming the planet.

Running out of time
The problem is that these technologies are not being developed and commercialised at nearly the pace necessary to arrest climate change. Urgent investments in innovation are needed today, because it can take decades for a new energy technology to achieve widespread adoption.

Noted energy historian Vaclav Smil observes that there have been three energy transitions over the last two centuries that we can learn from. From 1840 to 1900, coal rose from supplying five per cent of global energy demand to 50 per cent, dethroning wood as the largest energy source. Then from 1915 to 1965, oil beat out coal – rising from five per cent to 40 per cent. More recently, from 1930 to 1985, natural gas rose from five per cent to 25 per cent. Smil’s point is that each of these transitions took over half a century, and in the most recent one, natural gas still has not knocked oil off the top spot.

Given how long these transitions take, it is disheartening that the development of new technologies in the private sector appears to be slowing down. We need to invent, develop, and market new technologies quickly, to start them along the long road to mass adoption.

Recent research from Mark Muro at the Brookings Institution reports that since 2014 in the United States, the rate at which new patents for clean energy technologies have been granted has fallen after several years of growth. And my own research co-authored through the MIT Energy Initiative demonstrates that Silicon Valley venture capital investors walked away from funding many clean energy technologies, like new solar or battery materials, after losing over half of the $25 billion they invested from 2006 to 2011.

But it’s not all bad news. Some clean energy technologies have defied the general trend and risen to mass adoption rapidly. The best example is the light-emitting diode (LED), a far more energy-efficient alternative to the incandescent lightbulb. Goldman Sachs predicts that by 2020, LEDs will account for over two thirds of lightbulb sales, up from one per cent a decade earlier.

Many other technologies that use energy more efficiently and intelligently are successfully raising private funding and gaining market traction. Stephen Comello at Stanford University suggests that these technologies – including smart thermostats for the home or software to improve energy efficiency of buildings – represent a second wave of clean energy innovation.

The role of public policy
That’s where governments can step in to accelerate clean energy innovation. Domestically, they should invest in research, development and demonstration of new technologies – a step that can mobilise further private investment. This would not be an altruistic move to help combat global climate change; it would bring tangible domestic economic benefits. Worldwide, the clean energy market is already worth around $300 billion annually. Countries that develop advanced technologies will be most competitive in this market.

An encouraging development on this front is the Mission Innovation pledge made by 22 countries and the European Union to double their public funding for clean energy innovation by 2021. Most countries appear on track to meet their commitments, though the US under President Trump is now considering slashing its funding rather than increasing it. Doing so would be a reckless mistake.

Internationally, countries can work together to advance innovation. In addition to holding one another to account on their Mission Innovation pledges, countries can also share insights into how best to promote innovation. For example, the US might share lessons from its exemplary government agency known as the Advanced Research Projects Agency-Energy (ARPA-E), which funds transformative energy technologies. Germany might similarly share insights gleaned from its successful network of Fraunhofer Institutes.

Finally, countries can work together on issues like technology standards, which set out specifications for clean energy products that can speed their deployment.
Innovation is an imperative that should resonate around the world. And if countries come together to make the requisite investments in advancing it, they will be rewarded with prosperity and give the world a fighting chance to confront climate change.