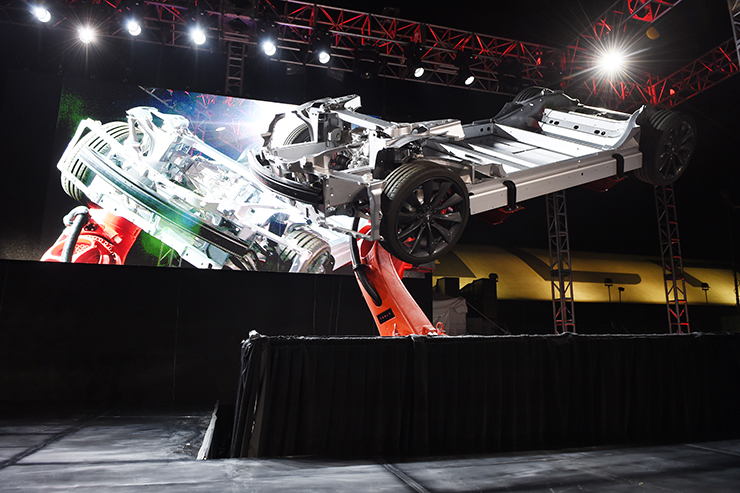 The launch of a new, all-electric Tesla car, produced by the entrepreneur Elon Musk. The private sector is very capable at directing investment and fostering innovation.  © Kevork Djansezian/Getty Images

The voice of business is not loud enough in the climate change debate. There are several reasons. Business is seen by some as being at the root of the climate change problem and is often regarded as being unwilling to incur the costs of avoiding environmental damage. Also, business might not be a trusted partner in discussions about the best policies for carbon mitigation.

Businesses themselves may be unwilling to speak up because they are daunted by the scale and pace of change that carbon mitigation will require. Existing businesses may be worried they will be swept aside by completely new technologies and competitors. They may be fearful that governments may make errors on low-carbon policies resulting in damage to their sector. But an impasse between governments and business on climate change spells danger for the environment and therefore for economies.

There is an urgent need for governments and businesses to make common cause in the fight against climate change.

The context for change
Significant agreement among governments in Paris this year on tackling climate change is vital. But such agreement would mark only the beginnings of the phenomenal changes required to the world’s energy system over the coming decades.

The science of climate change is complex but the arithmetic of the essential change to the world’s energy system is simple and stark. The global economy needs to decarbonise by a factor of ten in the first half of this century. That means getting a unit of economic output for less than a third of the energy input and getting a unit of energy for less than a third of the carbon emissions.

The world’s energy system is vast and the assets have long lifetimes. We are already well behind schedule on getting emissions down. The energy sector transformed society. Now the energy sector must itself urgently be transformed.

The technology exists, if imperfect
Yet this is not a problem of unavailability of technology. A set of technologies, admittedly none perfect, exists to get the job done on low-carbon energy.
We should not be squeamish or choosy. The solutions will come from a broad set of technologies, including a range of renewables, nuclear and carbon capture and storage (CCS) with both fossil fuels and biomass.

Some combination of electricity and hydrogen will play much greater roles in transport and heat for homes and industry. Energy efficiency will come from improvements in every nook and cranny of the economy. We do not yet know which combination of these technologies will work best. But at the moment it is dangerous to the climate to exclude any of them. We should be developing and testing all the significant low-carbon technology options.

The climate does not have a reset button. Our frame of mind should be about quickly scaling up, improving and deploying the technologies we already know about. Delaying early action using known technologies in the hope of some future miracle technology would be dangerous optimism.

The fact that low-carbon technologies exist is clear from a report in September 2014 by the UN Deep Decarbonisation Pathways Project. In addition, the Intergovernmental Panel on Climate Change (IPCC) published a report in April 2014 that included analysis showing that the costs of beating climate change could more than double if CCS is not deployed. This emphasises the importance of using all the major low-carbon technologies.

But although the technologies exist, mobilisation has been much too slow. It is very probable that negative emission technologies, especially biomass and CCS, will be needed.

Using market forces
I strongly believe that market forces have a vital role in tackling climate change. Market failures must be corrected but the market must not be abandoned. Properly functioning markets are powerful agents for change. Markets can deploy and redirect resources at great scale. Markets unlock major sources of finance. Markets foster innovation. Markets create efficiency and find the least-cost routes to meeting society’s goals. In short, we need to change the terms of trade for energy so that markets become our servant in beating climate change.

We must correct the major market  failure of not putting a price on carbon emissions. Sadly, efforts to do this have stalled around the world. But it is encouraging and fascinating to see that China is pressing ahead with carbon pricing and carbon markets.

But because tackling climate change is so urgent, a carbon price alone is unlikely to get the job done on time. Government support for scaling up and evaluating major technologies is vital.

In addition to price, regulation will play an essential role. It might seem odd for business to argue for more regulation. But regulation for things such as energy efficiency in household appliances and cars, together with regulation for low-carbon fuels would create a level playing field on which businesses can compete.

It is crucial we use all the levers in a modern market economy to reduce carbon emissions quickly and to find the least costly way of doing so.

According to the IPCC, tackling climate change might cost about 1.7 per cent of GDP by 2030. That might be around $2 trillion a year. This is just about affordable but the money needs to be spent wisely. The market is the best guarantor for cost-effective climate action.

First, business produces energy, uses energy and makes the paraphernalia we all use to consume vast amounts of energy. All aspects of this will need to change.

Second, much of the scientific, technological, engineering and production capacity of society is located in business. And business is set up to do things efficiently. Business has to be mobilised to put our energy system onto a low-carbon footing. Some sectors are, of course, more affected than others. Fossil fuels, miners, power generators, car makers, paper, steel, cement and food producers are all in the front line.

The smart choice for business
Far-sighted companies should judge that it is better for shareholder value if climate change is tackled sooner rather than later. Sooner means less damage to the environment and economies. Sooner means more time for governments to make sound, globally connected policies. Sooner gives more time for companies to develop competitive low-carbon technologies.

There might be a dispassionate argument that business should just wait and see whether governments can get their act together on climate change. But I believe delay will do economic damage. It is in the enlightened self-interest of business to argue for tackling climate change. The companies that are best prepared will do best.

But we must not expect companies to make changes they cannot pay for. No company is owed a living. They prosper or die depending on how well they perform. But the low-carbon energy market must economically reward those companies that competitively deliver low-carbon energy.

What business must do
Business must respond to the climate threat on three levels. First, business must speak out loudly about the urgent need to get carbon emissions down. Businesses should do this individually and, as is happening, through associations such as the World Business Council for Sustainable Development.

Third, individual businesses should work out the product strategies that will enable them and their customers to improve energy efficiency and reduce carbon dioxide emissions. These product strategies should be based on how to be profitable in a more sustainable world.

In taking these actions, companies should engage widely and publish their own performance in improving energy efficiency and getting emissions down. Companies should say whether the changes to their activities are consistent with a total pathway that will beat climate change.

The fossil fuel industry
Fossil fuels are a blessing and a curse. The blessing is the phenomenal energy density of fossilised solar energy, compressed and stored over millions of years. The industrial revolution was founded on this extraordinary energy density. But the curse is the unacceptable environmental impact of the rapid release of CO2. The way fossil fuels have been used cannot continue. But fossil fuel companies can have a future if they commit to low-carbon energy.

The work of the UN Deep Decarbonisation Pathways Project shows that substantial amounts of fossil fuels will still be needed mid-century. It will not be realistic to meet all our energy needs cost effectively only with renewables and nuclear power, even with major improvements in energy efficiency. But emissions from fossil fuels will have to be curbed significantly. This is why CCS is so important.

Each fossil fuel company will choose its own low-carbon energy strategy. No doubt they will play to their existing strengths in technology and engineering. The more obvious options for them include CCS, advanced biofuels that do not compete with food production and the hydrogen economy both for transport and heat. There is no guarantee of a future for fossil fuel companies. Their low-carbon responses will have to compete with new technologies from new market entrants. But if they plan well and invest, they have the chance to compete in a low-carbon world.

It is understandable that some businesses will be daunted by the prospect of tackling climate change. But daunted is a poor frame of mind in which to face the future. It is much better to recognise that we will all be better off if climate change is tackled sooner rather than later. Let’s not be daunted. Let’s be invigorated by the challenges and opportunities that a low-carbon energy transformation will bring.