The climate cost of food 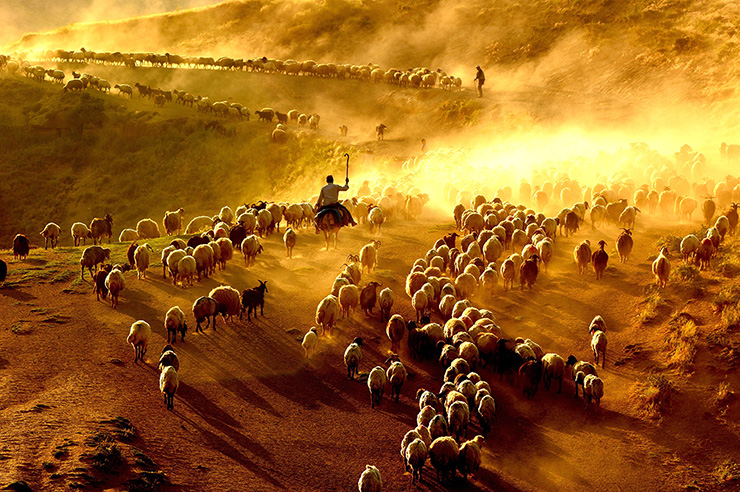 On the slopes of Mount Nemrut, Turkey, shepherds herd livestock to their village for milking. Caution is needed when advocating a complete and sudden shift to plant-based diets. Millions depend on animal farming, particularly those who live in semi-arid or arid rangeland  © Anadolu Agency

The climate cost of food

The benefits of a well-balanced diet on health are well known. Public awareness is higher than ever, with much written and spoken about the positive effects of vegetarianism, veganism, organic and superfoods, the ketogenic diet, and so on. However, the climate dimension of food is less well understood: what we eat both affects and is affected by the climate.

Several studies – including by the Intergovernmental Panel on Climate Change (IPCC) – have highlighted the impact of climate change on food production and prices. This affects food availability, affordability and consumption – and ultimately human health. Recent studies have expanded these analyses to include repercussions on micronutrients like zinc and protein, including in legumes and vegetables.

It is estimated that by 2050 elevated carbon dioxide (CO2) could cause an additional 175 million people to be zinc deficient and an extra 122 million people to be protein deficient. There are other effects to consider too. For example, climate-induced deficits in food production could lead to more international food trade, in turn generating more greenhouse gas (GHG) emissions from the transport and logistics sectors.

The climate cost of food is well documented. Agriculture and land-use systems are responsible for up to 30 per cent of anthropogenic GHG emissions and about 70 per cent of freshwater use. The sector produces the largest share of non-CO2 emissions, including methane and nitrous oxide from livestock, manure management, fertiliser use, rice cultivation and agricultural soils. But it also accounts for CO2 emissions through the burning of crop residues and savannah, for instance, as well as processes such as shipping.

While emissions occur throughout the different stages of the food chain – production, transportation, processing, preparation and storage – the intensity varies across the stages depending on the part of the world. In developing countries, like India, emissions mostly happen at the food production stage. In most developed countries that have a high affinity for processed food, emissions can be attributed mostly to the ancillary stages.

Animal-based foods are major contributors to these problems. Meat production, mainly beef, contributes most to GHG emissions. More specifically, enteric fermentation – where livestock produce methane during digestion and belching – accounts for the largest source of GHG emissions from the agriculture sector. The carbon footprint of a Big Mac cheeseburger stacks up at 4 kg of CO2 equivalent (CO2e) gases, which in turn translates to nearly two litres of petrol. Producing 1 kg of turkey meat is equivalent to 10.9 kg of CO2e. When considering all the GHG emissions caused by a food product, ruminant meat has the biggest carbon footprint, followed by seafood, eggs, poultry and plant-based food.

Against this backdrop, is it prudent to divide dietary choices into the classical binary of vegetarianism versus non-vegetarianism, ascribing planet-saving potential to one over the other? The situation is more complex than we think. A number of recent studies point towards the positive environmental consequence of a dietary shift to vegetarianism. Researchers from Oxford University recently estimated that a global shift to vegetarianism by 2050 would lead to a drop of GHG emissions by about 60 per cent. Lowering meat consumption would also mean that more land becomes available for farming, and that there is less of a need for expensive climate mitigation.

However, we must look at the spectrum of impacts of a dietary shift to vegetarianism. Such a shift would have significant impacts on the food web as a whole, as food chains are interlinked and often interdependent. It would also affect the wider ecological cycle.

The full environmental cost across the entire food value chain also needs to be explored. For example, half of humanity consumes rice. The IPCC suggests that agriculture is responsible for approximately 50 per cent of global methane emissions, with rice accounting for 11 per cent. It takes approximately 3,000 litres of water to produce just 1 kg of rice. Then there are the additional environmental costs associated with producing fertilisers, processing the rice, marketing, and so on.

So if we are to make the farming of crop-based food products sustainable and less damaging to the environment, farming techniques must change. Rice farming, for instance, could use the ‘alternate wetting and drying’ technique. This reduces the amount of time rice fields are flooded, lowering the production of methane by about 60 per cent.

In addition, we must consider whether a sudden shift to plant-based diets is feasible from a socio-economic point of view. A completely plant-based diet would lead to very different outcomes in developed and developing parts of the world. While the environmental and health benefits in developed countries may be more pronounced, in developing countries such a shift may in fact exacerbate poverty. Millions of people are dependent on animal farming as a sole means of livelihood, especially when you consider that a third of the world’s land is semi-arid or arid rangeland.

Everything in moderation
So, can we cut GHG emissions by simply changing dietary patterns? The research suggests that it is certainly possible to reduce emissions through shifting to locally produced fresh food, moderating meat and dairy consumption, consuming more vegetable protein, shifting from ruminants to poultry, and so on. But all of this will count for little if we continue to produce food that causes very high emissions.

What, then, are the most important recommendations to infuse sustainability into food production and consumption, and reduce its climate cost? First, moderation is key. Global studies have found that limiting meat intake and simply adhering to the World Health Organization’s dietary recommendations would bring down emissions – by as much as 17 per cent in developed countries such as the UK.

Reducing food waste is another solution with colossal significance. Every year 1.3 metric gigatons (1.3 billion tonnes) of edible food goes to waste, according to a 2017 study from the University of California. Nearly 6.7 per cent of all global GHGs come from food waste, according to the UN’s Food and Agriculture Organization. Addressing this issue, therefore, holds immense potential in dealing with the climate cost of food.

More fundamentally, we need to move towards climate-smart agriculture (CSA). CSA is an approach that aims to increase agricultural productivity sustainably; support equitable increases in farm incomes, food security and development; adapt and build resilience of agricultural and food security systems to climate change at multiple levels; and reduce GHG emissions from agriculture wherever possible.

Precision farming is one CSA practice. It involves a more precise application of essential nutrients like nitrogen on crops, which significantly lowers emissions and runoffs without affecting yield. Precision farming also adheres to the principles of conservation agriculture. As well as encouraging efficient use of water and nutrients, conservation agriculture promotes diversification of plant species, soil conservation and enhancement of natural biological processes. Greening the way we power our farms through solar energy is also a promising way to mitigate emissions while boosting farm incomes.

And we need participatory evaluation platforms for making informed choices on sustainable agricultural practices. The climate-smart village approach of the CGIAR research programme on Climate Change, Agriculture and Food Security is one such platform that transforms villages and landscapes into sites for testing technological and institutional options. These villages generate evidence of the effectiveness of CSA in a real-life setting. Above all, we need the constant convergence of science, policies and politics to usher in sustainability in the global food system.