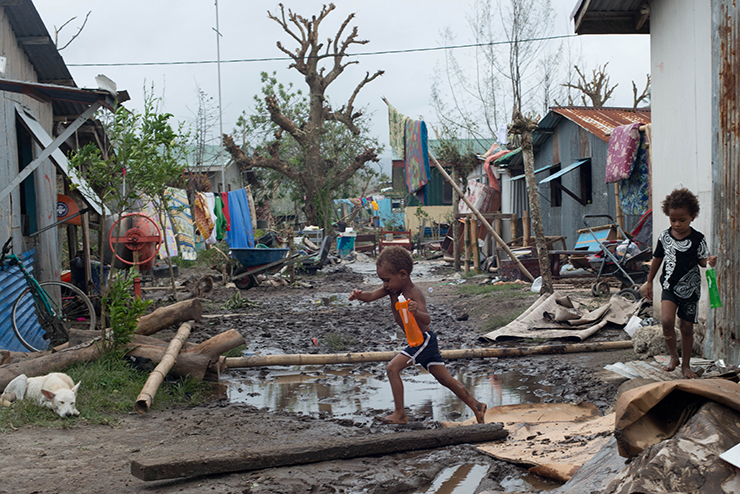 On Sunday 15 March 2015, residents contend with storm damage in Mele village, on the outskirts of the capital Port Vila in Vanuatu. Tens of thousands of children are in urgent need of assistance in Vanuatu after tropical Cyclone Pam ripped through the island. The category 5 storm hit late on Friday night, 13 March, and continued into the early hours of Saturday morning, leaving children at particular risk.

It is estimated that at least half the population of Vanuatu has been affected by cyclone Pam. Of these, at least 54,000 are children. Many homes in Vanuatu have likely been destroyed as they are built with natural and local materials such as thatched and corrugated roofs that are vulnerable to strong winds and floods. Health centres have likely sustained severe damage and will need rebuilding and restocking with medical and nutrition supplies. Many of these buildings are likely to have suffered structural damage. Lifeline facilities like hospitals, electrical utilities, water supply and telephone systems are most likely severely damaged. Power and water supply has been affected across Vanuatu, including in the capital city Port Vila. Schools are being used as evacuation centres, and UNICEF will be supporting children’s education, including providing school in a box kits. Child friendly spaces will be set up in evacuation centres to provide children with psychosocial assistance. Churches and community halls are being used as emergency shelters. Other Pacific Island countries have been severely impact as well, including the Solomon Islands, Tuvalu and Kiribati. UNICEF is on the ground in the affected countries, providing immediate assistance. Most urgent needs include the provision of water containers, purification tablets, soap and temporary sanitation facilities. UNICEF’s immediate needs to assist the affected countries is at least US $2 million, initially covering support to water, sanitation, hygiene, health, education, nutrition and protection services, an