The fragility of cities

As climate change drives more people from rural to urban settings, how will already fragile cities cope? What must be done to ensure that all cities are safe, sustainable places to live? 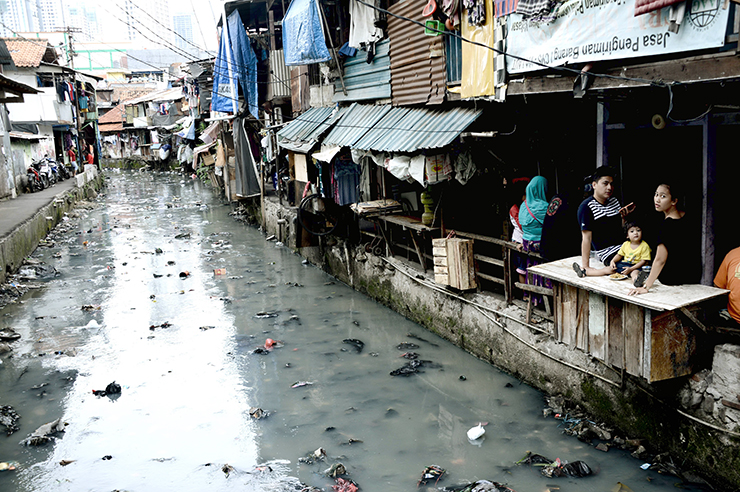 Residents in a slum on the banks of the Ciliwung river in Jakarta, Indonesia. The task of creating a safe living environment is compounded by the fact that the city is sinking, through a combination of subsidence and sea-level rises © Goh Chai Hin/AFP/Getty Images

The fragility of cities

As climate change drives more people from rural to urban settings, how will already fragile cities cope? What must be done to ensure that all cities are safe, sustainable places to live?

Why are the potential connections between climate change adaptation and urban violence important to understand? First, to ensure that adaptation efforts do not inadvertently increase the risk of urban violence. And second, where possible, so that these efforts can be designed to reduce the risk. This article identifies some of the gaps in the knowledge base and potential entry points for future research and action.

Why are cities so special when it comes to climate and fragility risks? From a climate perspective, the concentration of populations, infrastructure, economic activity and services means that the social, economic and political impacts of climate change in cities are exacerbated.

From a conflict perspective, cities put a spotlight on inequality through the sheer proximity of rich and poor – often with the most wealthy and poorest living side by side. OECD figures show that inequalities have increased in 75 per cent of the world’s cities in the past 20 years.

An array of challenges
In a fragile context where inequality, poverty and marginalisation are drivers of grievance and conflict, climate impacts can make these inequalities even more apparent, fuelling grievances further. Often, it is the poorest who live in the most exposed areas, such as flood plains. In Karachi, floods in 2011 had a devastating impact on inhabitants of the city – but not all of them. Local business leaders received help to safeguard their assets through provision of sandbags. The inhabitants of slums, however, had no such assistance.

Urban populations are typically highly mobile and heterogeneous. These two traits characterise both urban resilience and vulnerability. City populations are cosmopolitan, perhaps more ethnically or religiously tolerant (often bringing knowledge of other contexts), and able to adapt and cope with shocks.

But urban living also means that ethnic differences are experienced at close range, with various, often hostile, ethnic groups living side by side. This can raise the risk of violence – such as that seen in the Nairobi slums during the 2007-08 election and again, though to a lesser degree, in August 2017. Governing transient populations that are frequently on the move presents an array of challenges – from tax collection and documentation to ensuring the sustainability of long-term interventions such as programmes to enhance livelihoods.

Weak governance: Most urbanisation occurs in lower-income countries, many of which are classified as ‘fragile states’. While, in principle, cities can absorb new entrants and provide them with employment, this is harder to ensure in fragile states where governance capacity is already weak or strained. Even relatively robust governments may struggle to provide jobs, housing and services to meet the needs of their rapidly growing urban populations.

Governments that were designed to rule over cities of a certain size may be overwhelmed by in-migration. Where the government is absent or incompetent, local groups – from the benign (non-governmental organisations, labour unions, religious groups) to the malignant (organised crime cartels and terrorist organisations) – step into the void.

Informality (of shelter, communities, economies): Inhabitants of informal settlements are often particularly exposed to climate impacts. Without adequate governance of in-migration to cities, the UN Department of Economic and Social Affairs predicts that the number of people living in slums will triple by 2050.

Informal settlements, and informal economies that often thrive within them, can indeed be a source of resilience through the strong social capital and cohesion present within these communities. But the informal nature of those economies does not provide much in the way of governance, stability or predictability.

Addressing the particular vulnerabilities and harnessing the dimensions of resilience of slum/shack dwellers is thus of particular importance in ensuring stability.

Migration is another important trend that converges in cities. It overlaps with other pressures such as inequality and climate change in complex ways. For example, climate change may contribute to rural–urban migration. Migration can offer opportunities for fostering resilience, for example through remittances.

But it can also pose a risk to migrants in urban settings since a disproportionate number of slum/shack dwellers are migrants, and are therefore exposed to greater climate vulnerability. A more nuanced understanding of migration strategies is required to foster positive migration in the face of climate fragility risks.

Improving cities’ resilience
Facing these challenges requires innovations in governance. At the moment, the international system is set up to act at the level of nation states. Meanwhile, city leaders are forging networks within and across international boundaries to address shared problems, including climate change.

But national governments and multilateral agencies such as the UN system are not organised to work with city-level governance mechanisms. Their continued focus on nation states limits the scope for devolved decision-making and consultative engagement at the city level.

We are also in an unprecedented era of global frameworks that offer real opportunities to promote resilience. However, the Sustainable Development Goals (SDGs), the New Urban Agenda and the UN Peacebuilding Commission’s Sustaining Peace Agenda all have gaps when it comes to addressing this nexus of climate change, cities and fragility.

The SDGs include an urban goal (SDG 11) and a peace and security goal (SDG 16), while the New Urban Agenda makes reference to “conflict and post-conflict contexts”. But the city is absent from the Sustaining Peace Agenda, and the New Urban Agenda provides no substantive guide on how to address urban violence and conflict. To ensure that policy responses genuinely address the complex risks posed to cities by climate change and fragility, we need to realise that climate change and conflict prevention activities do not operate in a vacuum in cities such as Karachi, Nairobi or Kabul.

Climate change and peace-building need to take account of city dynamics. Similarly, urban planning and development need to be ‘climate and conflict sensitive’. That is to say, efforts to make cities resilient must take into account cities’ complex dynamics.

This means understanding how potential conflicts arise in urban settings, the political economy, as well as knowing who holds power when land and resource rights are not clearly defined. It also means asking the right questions. How will urban planning interventions such as a slum-upgrading programme affect social dynamics and social cohesion? What can actually build resilience?

To answer these, the development community working to build resilient cities need only look to the peace-building and climate-adaptation sphere for existing tools to understand conflict and climate vulnerability.

There was consensus at the 2016 World Humanitarian Summit on the need for greater localisation. The gaps in the global frameworks illustrate that global and national development efforts must be transposed to the urban scale. This will require a transformation of the way in which the UN system and many donor agencies operate – for example recognising the role of urban authorities (which remain absent in many agreements) and building local urban capacity.

It will also need greater contextual knowledge of city actors – mayors, urban dwellers, municipalities and urban conflict dynamics – as well as engaging them in the implementation of global processes.