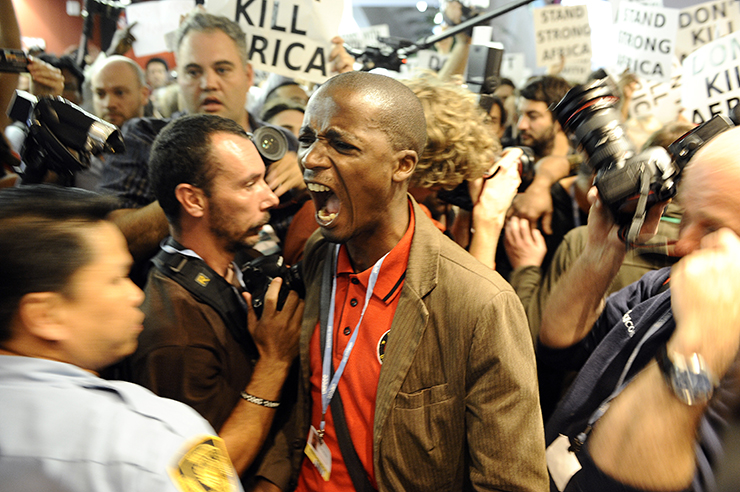 A man shouts in the halls at the venue of the UN Climate Talks on December 9, 2011 as demonstrators demand that nations not sign a “death sentence” during the UN Framework Convention on Climate Change (UNFCCC) in Durban. Standing side-by-side with delegates from some of the world’s most vulnerable countries, civil society representatives sang traditional South African freedom songs and chanted slogans like, “Listen to the People, Not the Polluters.”. In the last 48 hours, over 700,000 people have signed petitions calling on major emitters to stand with the nations of Africa and resist any attempts to delay climate action until 2020. UN climate talks entered their second week entangled in a thick mesh of issues with no guarantee that negotiators and their ministers will be able to sort them out. The 194-nation process is facing, for the second time in two years, the prospect of a bustup, even as scientists warn against the mounting threat of disaster-provoking storms, droughts, flood and rising seas made worse by global warming. AFP PHOTO / STEPHANE DE SAKUTIN (Photo credit should read STEPHANE DE SAKUTIN/AFP/Getty Images)