For centuries, humans have championed the democratic political system. But can it facilitate the radical change needed to stop the potentially annihilating effects of climate change? 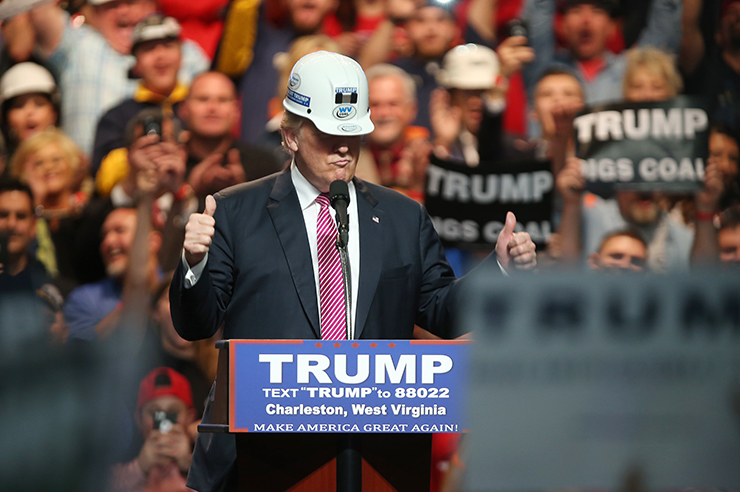 Donald Trump in Charleston, West Virginia. In the fallout of the financial crisis, populist leaders in most democratic countries have espoused cheap fossil-fuel energy as a remedy to falling living standards © Mark Lyons/Getty Images

For centuries, humans have championed the democratic political system. But can it facilitate the radical change needed to stop the potentially annihilating effects of climate change?

By AC Grayling , Master of the New College of the Humanities, London, and its Professor of Philosophy

Although individual action to protect the environment – consuming less, recycling more, reducing one’s carbon footprint – might be a contribution if enough people did it, the battle to minimise human-induced climate change has to be a worldwide endeavour among cooperating states.

The outcome of the 2015 UN Climate Change Conference was one of the most optimistic and encouraging steps hitherto achieved in that battle – that is, until Donald Trump said he intended to withdraw the US, the biggest climate polluter in history, from the agreement.

The Paris Agreement and President Trump’s decision illustrate the two ends of the spectrum of effort and concern. Our planet cannot be protected from a warming atmosphere – with melting ice caps, rising sea levels, droughts, floods, famines and migrations of desperate populations – without vigorous joint effort by the world’s states.

It is thought that climate catastrophes caused turmoil in the past – perhaps at the beginning of the fourth millennium BCE, and in the early 12th century BCE when entire civilisations in the Mediterranean and Near East collapsed in rapid succession into centuries of dark ages. Only this time – today, in our present world, with a global population of over seven billion that is growing ever faster – any such catastrophe will be many orders of magnitude greater.

That is the situation that makes concerted international effort imperative. At the other end of the spectrum, President Trump’s announcement illustrates the fragility of international cooperation. It takes just one large rogue elephant in the herd to negate the endeavour. Any one of the US, China, India and the EU could undermine the sacrifice and determination demanded by the Paris Agreement.

It is a desperately sad move by any one large polluting economy if it refuses to cooperate. Such a decision condemns – actually condemns, not merely threatens to condemn – hundreds of millions of people to suffering, and almost certainly the whole planet to new dark ages.

Democracy is, as has been well said, the least bad of a lot of bad systems. But it pays a high price for the noble ideal of locating political authority in the consent of the people. Tyrants can make and act on quick decisions. Democracies debate and disagree, and move slowly. Tyrannies are efficient to the point of mercilessness. Democracies are inefficient to the point of ineffectiveness at times. The very nature of the political process in democracies means that leaders are reluctant to burden the populace with restrictions and sacrifices, lest they are voted out of office.

But saving the planet requires restrictions and sacrifices. Leaders are reluctant to burden business with extra costs on emissions and other good environmental practices, lest they damage the economy, and again in consequence lose office. Tyrants have no such anxieties: they worry only about the assassin or eventual rebellion.

Democracy, accordingly, is not a natural ally of the tough measures required to combat climate change. And yet populations of democracies will be the first to punish their political leaders when the disastrous effects of climate change start hitting home.

What is required for democracies to become fully engaged in the fight to save the planet is that their citizens should be informed and thoughtful, and willing participants in the required sacrifices. Given the realities, say cynics, is not this a vain hope?

Efforts to inform are manifold, but they are undermined by deniers and sceptics, among them Mr Trump. Efforts to encourage thoughtfulness and sacrifice among the people meet with the age-old reluctance on the part of too many people to attempt either.

Short-termism, self-interest, lack of real understanding, a head-in-the-sand attitude and several kinds of laziness and self-indulgence make us humans our own worst enemies: and in a democracy we all feel entitled to be all these things as a right. There is nothing new in this. Plato two and a half millennia ago criticised democracy precisely because of this. But this is now a major life-threatening dilemma for our time.

Driving home the dangers
The international order is effectively an anarchy if any of its members – sovereign states – refuse to play ball with the rest, or refuse to adhere to agreements previously made. What is the sanction against, say, the US if indeed it does withdraw from the Paris Agreement? The international order is itself a loose form of democracy, and suffers the same deficits.

This fact illustrates where the nub of the problem lies: a lack of a sense of binding obligation to act for the benefit of others. Short-termism and self-interest are endemic weaknesses both of democracies and those who live in them. And these are precisely the things that have already wrought so much damage to the world’s climate, and threaten the people of the world with ever-increasing danger.

Human survival is of course not the only, though it is the most obvious, point at issue in the climate emergency we are facing. Peace, stability, human rights, the welfare of children – these will all collapse before the survival issue becomes the only one left.

Now, not one of us should or would, I hope, seek to overturn democracy. But every one of us should, I hope, bend our thoughts vigorously to the problem of how to make the saving of our planet consistent with democracy. For surely, democracy and survival do not have to be in conflict. There have to be ways in which democracies can be full, compassionate, sensible partners with each other – indeed with everyone, no matter what the political system – in rescuing the planet from the peril that our historical self-indulgence and exploitation have already placed it in.

To ensure that the aims of the Paris Agreement are met, there therefore has to be another effort alongside the drive for far greater sustainability in industrial-commercial activity. This is an overwhelming, unceasing drive to educate and re-educate every single individual on the planet about climate change.

The real and imminent dangers to lives and societies have to be driven home. People have themselves to become the goads driving politicians and governments to act. If the world’s people can be mobilised, then the short-termism and self-interest of the political classes in democracies will be addressed. Measures will be taken that people can understand are genuinely in their own real interests, as well as the interests of their fellows in the human story around the world.

Many are cynical about the potential of education to achieve anything like what is required here. Time and again dreamers and idealists have launched themselves into education to better the world. But in the face of how things are in both national and international politics, other than climate-induced civilisational collapse itself, education is the only thing that has a hope of changing minds. It is all we have. But with massive effort we can make a difference, and perhaps enough of one to save our lives. We have to teach ourselves into freedom from this danger: nothing less can or will do.