The reality of climate change demands that we generate our future energy in a clean, sustainable way. What are the technologies on offer, and can they meet the planet’s ever-growing energy needs? 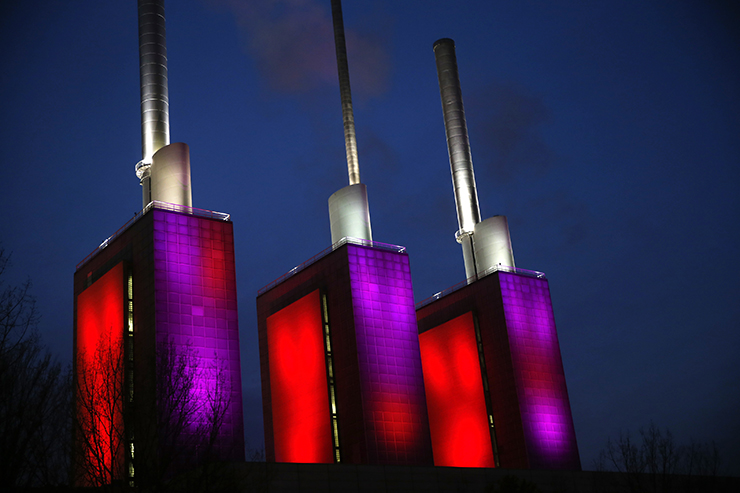 Linden, the combined heat and power plant in Hanover, Germany. The plant is powered with natural gas and produces 255 MW electrical and 185 MW district heating at an efficiency factor of 90 per cent.  © Wolfgang Rattay/Reuters

The reality of climate change demands that we generate our future energy in a clean, sustainable way. What are the technologies on offer, and can they meet the planet’s ever-growing energy needs?

Greenhouse gas (GHG) emissions have been steadily increasing since the industrial revolution and reached 50 gigatonnes (Gt) of carbon dioxide equivalent (CO2e) in 2010. In the absence of climate policy that limits GHG emissions, global energy economy and integrated assessment models estimate that global GHG emissions could reach 90 to 136 Gt of CO2e by 2100. Significantly decarbonising the global energy system will require GHG emission reductions in a number of different sectors, including industrial, buildings, transportation, electricity generation and land use.

While decarbonisation can occur in all of these sectors, the electricity sector holds significant potential. This is especially true when electricity generated from low- or non-carbon sources is used to replace high-carbon-intensity fuels in other sectors, such as electrification of oil or gas-fired heating systems or the use of electric vehicles.

A number of studies have been conducted to investigate various policies, technologies and costs associated with decarbonising the energy system in the 21st century to achieve climate stabilisation targets. The Energy Modeling Forum (EMF) Study 27 compared the results of 18 different energy economy and integrated assessment models. It examined the effect that technology cost and availability assumptions have on the feasibility of meeting climate policy goals that limit atmospheric GHG concentrations to 450 or 550 parts per million (ppm) of CO2e.

The study compared a scenario that assumed a full suite of technology options for deployment for climate mitigation, including carbon capture and storage (CCS), nuclear power, solar and wind and bioenergy, with scenarios that limit the availability of certain technologies. For example, in some scenarios CCS does not become commercially available, new nuclear power is not deployed due to public opposition, wind and solar integration is constrained, or bioenergy production is restricted due to concerns about food supply, conflict or water stress – as well as combinations of these scenarios.

Under any technology scenario, enacting climate stabilisation policies results in costs that are higher than a baseline scenario of doing nothing. However, the results of all of the models indicate that the more limited the technology choices available, the more costly the policy implementation will be, especially when trying to reach the more stringent goal of 450 ppm of CO2e. In scenarios where CCS is not available and in scenarios where the combination of solar, wind and bioenergy deployment is limited, policy costs can be between one and a half and four times as high as the scenario with the full portfolio of technologies.

When all technologies are limited such that there is no deployment of CCS or new nuclear power and constrained deployment of solar, wind and bioenergy, none of the models were able to reach a solution for meeting the 450 ppm of CO2e target. This highlights the importance of having a full portfolio of low-carbon-generation technologies available for future deployment.

Current and future generation technologies
Over 40 per cent of the world’s electricity was generated by coal-fired power plants in 2012. Pulverised coal (PC) units provide nearly all coal-fired capacity generated globally, while the first commercial-scale integrated gasification combined cycle (IGCC) plants are under construction and in early years of operation.

PC plant efficiencies have increased over the years as improvements in materials for boilers and steam turbines and understanding of cycle water chemistry have resulted in steam conditions with higher temperatures and pressures. This increase in efficiency reduces the amount of fuel burned and pollutants emitted for the same amount of electricity generated.

IGCC plants have efficiencies that are similar to supercritical PC plants, but the removal of pollution-forming constituents prior to combustion can allow IGCC plants to meet very stringent air emission standards. Advances in gas clean-up technology, oxygen separation techniques and high-temperature gas turbines are expected to continue to improve the efficiency of IGCC plants while reducing their cost.

Coal and gas
Even with efficiency improvements, for coal-fired plants to continue to operate in a decarbonised world, CCS (capturing CO2, either from the synthesis gas of an IGCC before combustion or from the flue gas of a PC after combustion, and storing it underground so that it is not emitted to the atmosphere) must be included on any new coal plants and, likely, retrofitted on existing plants. Applying CCS to a coal-fired plant is both expensive and energy intensive, increasing plant cost while decreasing plant output.

Research and development (R&D) continues on several promising improvements, such as alternative sorbents and membrane separation that are hoped will achieve significant reductions of costs and energy penalties. The timeline and scale of commercial adoption of CCS within the power industry depends on a number of factors, including the implementation of CO2 regulations and policies, reductions in the cost and energy penalty of the technology and competitive market conditions.

Natural gas-fired combustion turbine (CT) and combined-cycle (NGCC) power plants are mature generation technologies, representing just under a quarter of the electricity generated worldwide in 2012. CTs have the unique distinction of relatively reliable and efficient performance throughout the duty spectrum of power plant operation. NGCCs demonstrate some of the highest efficiencies currently attainable along with high availability.

While the combustion of natural gas emits only about half the amount of CO2 as coal combustion, under stringent carbon constraint scenarios NGCC units might also require CCS, resulting in increased capital costs and decreased plant efficiency. The R&D targeted at reducing cost and improving efficiency of post-combustion CCS for coal-fired plants would equally benefit NGCC plants.

Nuclear
Nuclear power is a mature technology representing approximately 11 per cent of electricity worldwide. Nuclear plants do not emit GHGs or other air pollutants, but the waste generated by nuclear plants requires safe storage and disposal.

A long-term strategy for high-level nuclear waste remains unresolved in many countries. While new nuclear construction in the US has been stalled until recent years, countries such as Japan, Finland, China and France have continued to build new plants. However, the events at the Fukushima Daiichi Nuclear Power Plant following the Japanese earthquake and tsunami in 2011 have led some countries, such as Germany, to reconsider their continuing use of nuclear power.

Advanced nuclear reactors based on more advanced fuel cycles are currently under development and are envisioned to have higher efficiency, reduced high-level waste, lower waste management costs and reduced amounts of fissile material requiring security due to proliferation concerns. These reactors could possibly be capable of supporting high-temperature hydrogen production, water desalination and other high-temperature process heat applications as well.

Bioenergy
Bioenergy is also a commercially available technology, serving as a dispatchable renewable power resource with the ability to operate at baseload (the minimum amount of power that a utility must make available to its customers). Future growth in bioenergy generation will be influenced strongly by resource management development and resource competition, energy and climate policies, and the pace of progress in advanced fuels and technologies.

In most analyses, biofuels are assumed to be a carbon-neutral feedstock, with CO2 emitted during combustion being reabsorbed as new biofuels grow. When bioenergy is combined with CCS (BECCS) and the CO2 emissions from the carbon-neutral feedstock are sequestered, this technology has potential for negative CO2 emissions. As with other technologies with CCS, efficiency improvements and cost reductions will be critical to commercial deployment moving forward.

Wind and solar
Wind capacity has expanded rapidly worldwide in recent years, driven by tax incentives, renewable generation targets and declining capital costs. While major wind turbine components are considered to be mature, the technology continues to evolve and improve with larger turbines and higher hub heights to take advantage of less favourable wind resources. Offshore wind is a less mature technology but continues to expand, with the majority of global installations currently in Europe.

Offshore farms take advantage of the stronger and steadier wind resources at sea, though turbines must withstand the impact of waves and harsher conditions than onshore turbines and require undersea electric cables.

As the installation of wind farms continues to increase, additional scrutiny is being paid to grid integration and the unique challenges that the variability and uncertainty in wind power output place on the grid, demanding additional system flexibility and load-following from other generation assets. High penetration of wind energy will have power system impacts that have to be managed through proper interconnection, transmission planning and system and market operations.

Solar technologies include both photovoltaic (PV) and concentrating solar power (CSP). The cost of PV modules has fallen rapidly in recent years and is expected to continue with improvements in PV design and manufacturing processes. There are also opportunities to reduce the cost of system components and design, and engineering and installation costs for the overall PV system.

As a result, PV has been the primary solar technology installed in recent years throughout the world. However, similar to wind, PV poses a challenge of variable and uncertain output that will continue to require thoughtful advances in system design and integration technologies.

With the dramatic fall in PV prices in recent years, planning and construction of CSP plants has declined significantly. However, a distinguishing attribute of CSP compared to PV is the ability to use thermal energy storage to capture and store heat produced in the solar field to generate steam for the steam cycle at later times when the electricity is needed, removing intermittency concerns and making it a dispatchable generation technology. Efforts to decrease the cost of CSP include the development of higher temperature working fluids and larger plant sizes, in addition to advances in manufacturing and construction.

The need for continued R&D
A full portfolio of low-carbon technology options is essential for meeting aggressive decarbonisation goals at the lowest cost possible. All of the technologies described above can contribute to this goal, but all require continued R&D to decrease costs, increase efficiency and improve integration into the existing energy system. Investments in R&D activities now have the potential to significantly decrease the impact of decarbonisation policies in the future.