The ocean is the climate

Covering seven-tenths of the Earth’s surface, the oceans have played a major role in mopping up greenhouse gas emissions. What effect is this having on them and the ecosystems they support – and what does this mean for the future of the planet? 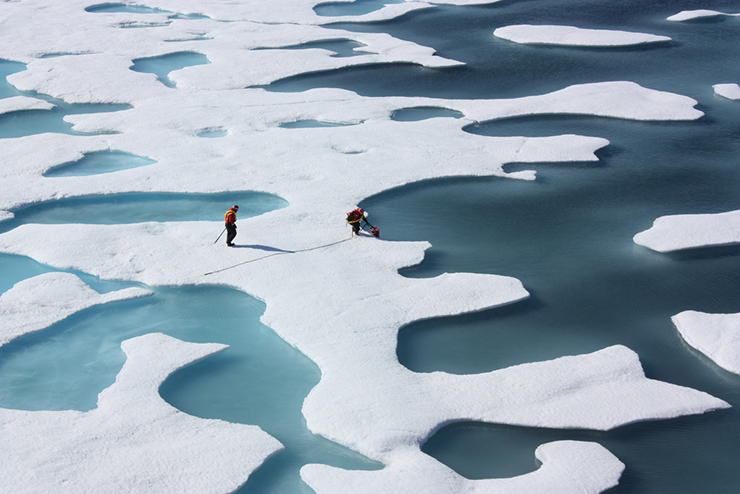 ICESCAPE, NASA’s shipborne investigation to study how changing conditions in the Arctic affect the ocean’s chemistry and ecosystems.  © NASA/Kathryn Hansen

The ocean is the climate

Covering seven-tenths of the Earth’s surface, the oceans have played a major role in mopping up greenhouse gas emissions. What effect is this having on them and the ecosystems they support – and what does this mean for the future of the planet?

In many ways the ocean is the climate. The ocean is the regulator of rainfall and drought patterns. It has absorbed approximately 30 per cent of all excess carbon released into the atmosphere due to human activities and more than 90 per cent of the excess heat in the climate system since the industrial revolution. This causes ocean warming and acidification, with a direct impact on human coastal settlements, for example through the rising sea level, and on marine ecosystems.

The Intergovernmental Oceanographic Commission (IOC) of the UN Educational, Scientific and Cultural Organization (UNESCO) has been involved in ocean and climate change research since its founding 55 years ago. It has been at the forefront of the scientific debate that has expanded in scope from supporting ocean observations and detecting impacts to discussing potential mechanisms that may be used to mitigate and adapt to this new reality.

This development reflects an urgent need to minimise the impacts of global warming by taking action based on robust scientific knowledge. Achieving a comprehensive understanding of the ramifications and implications of climate change for human society and the ecology and sustainability of the entire planet is only possible by adopting an internationally integrated approach.

All of us will have to learn how to live with climate change. In 2000, the estimated population in the world’s Low Elevation Coastal Zone (below 10 metres of elevation) was 625.2 million.¹ Sea-level rise, together with extreme weather events such as typhoons and hurricanes, has caused many tragedies in the last 10 years, including the loss of thousands of human lives. This is happening in developed countries (Hurricane Katrina in the US in 2005) and developing countries (Typhoon Haiyan in the Philippines in 2013). A less visible effect of sea-level rise is shoreline retreat and the erosion that the sea is causing in coastal areas of many countries, which affects human settlements.

Some countries are in a position to prepare themselves for sea-level rise (such as the UK and the Netherlands) but many other countries will be severely impacted. The IOC is connected with the research on sea-level rise through the World Climate Research Programme and also coordinates observation networks such as the Global Sea Level Observing System and the Global Ocean Observing System.

The oceans sustain a great wealth of biological diversity. A healthy marine environment is an important factor for economic development, social wellbeing and quality of human life. The effects of climate change on marine ecosystems and their living resources are diverse. For example, the coral reef ecosystems of today may not be viable at CO2 levels above 450-500 parts per million. This is a risk not only to the corals, but also to their entire ecosystem, which includes several thousands of species, about half of which are at risk of disappearing.

Establishing international scenarios
Over the last 30 years, ecosystems in all European seas have changed substantially, in large part due to warming sea temperature linked to climate variability and change. The changes are reflected in the shifts of distribution, seasonal timing and loss of biodiversity, with many appearing to accelerate. The prognosis is for continuing change as temperatures rise, with likely significant detrimental effects on biogeochemical cycles and living marine resources.

While approximately 30 per cent of the human-made CO2 emitted into the atmosphere has been absorbed by the oceans, this comes at a steep ecological cost. Elevated dissolved CO2 levels in seawater have resulted in a 26 per cent increase in the acidity of the oceans since industrialisation and in a corresponding change of the biogeochemical carbonate balance.

Concerns about ocean acidification, first expressed in the early 1980s, have been fully confirmed. However, it is only now that the potential extent of the ocean acidification impacts on marine ecosystems is starting to be understood. Such impacts may have significant ecological and economic consequences, for example affecting calcifying organisms such as oysters and other shellfish. Research groups in several countries suggest that ocean pH levels be used to identify “dangerous anthropogenic interference with the climate system”, as defined by the UN Framework Convention on Climate Change, to set the CO2 stabilisation targets.

National and international science organisations, including the Intergovernmental Panel on Climate Change, have encouraged the IOC to continue to review this subject. The IOC is supporting this work through a number of working groups and an ocean acidification observation network.

Understanding and quantifying the role of the ocean as a natural sink for CO2 is crucial for establishing international emission-stabilisation scenarios and for understanding the ocean’s role in the future climate conditions. Safeguarding carbon sinks and vital ecosystems is as essential for climate protection as reducing emissions. Degrading grasslands and aquatic systems is the equivalent of killing our best allies in the fight against climate change.

The Blue Carbon concept, launched by the IOC together with the UN Environment Programme, the International Union for Conservation of Nature and Conservation International, aims to mitigate climate change through the conservation and restoration of coastal and marine ecosystems such as mangroves and saltmarshes. These ecosystems are highly productive and efficient in sequestering and storing ‘blue’ carbon from the atmosphere. Acting together with the biological pump (exportation and sedimentation of organic matter to the sea bed), this makes the oceans an essential element of the solution to global climate change.

Warming, deoxygenation and acidification already have, and will continue to have, significant ecological and economic consequences. This is taken into account by proposed indicators for the Sustainable Development Goals to be agreed by the UN General Assembly this autumn. The IOC co-sponsored several international scientific symposia to review our knowledge on climate change science and to evaluate the physical, chemical and biological impacts of ocean warming and acidification in 2004, 2008, 2012 and 2015. But this is not sufficient. To detect reliably the human-made impact on the marine environment, we need more sustained observations at a high temporal and spatial resolution, including physical, chemical and biological measurements.

The impacts of climate change and other human activities may be synergistic and non-linear. The difficulty of disentangling multiple stressors within poorly sampled systems has thwarted the discovery of marine climate change impacts. Currently, no part of the ocean remains unaffected by human activities and their consequences, such as fishing, pollution, eutrophication (enriching the environment with nutrients), habitat destruction, hypoxia (reducing oxygen content), litter and species introductions.

Cumulative effects
These stressors may have masked more subtle impacts of climate change (see figure below) and may even have misled researchers to interpret climate change impacts as those of local environmental changes. The cumulative effects of multiple stressors may lead to greater changes in marine systems than expected from studies focusing on a single stressor. We therefore need future research to determine the variables that are likely to interact and the causes of such interaction. There is no longer any doubt that global warming and ocean acidification are real and that the climate of the Earth has entered a period of rapid change, with potential negative consequences for the oceans, their ecosystems and living marine resources. The scientific challenge posed by climate change has led to the development of a corpus of observations, models and hypotheses for critical processes involved in the functioning of the Earth system. This progression has strongly influenced other disciplines and altered our approaches to such topics as risk analysis, socio-economics, ethics, politics, energy, natural resource management, geo-engineering and even evolution.

Fortunately, the governments of many countries have recognised the importance of addressing this crisis and in many recent declarations have identified climate change as the most important priority to be tackled through common and concerted actions by societies throughout the world. A need to move to a low-carbon economy is widely recognised, as is the urgent need to reduce global greenhouse gas emissions. If the necessary reductions are not achieved, or are achieved too late, greater emphasis will need to be placed on adaptive measures in order to counteract the climatic consequences of greenhouse gas emissions and thereby ensure the well-being and safety of populations in coastal regions, and the maintenance of ecosystem services, trade and goods.

If strong mitigation and adaptation actions are taken now, there is still time to avoid the worst impacts of climate change.