The power of education

Achieving a new global mindset on climate change and sustainability starts with education. How can the international community collaborate in climate education to bring about behavioural change? 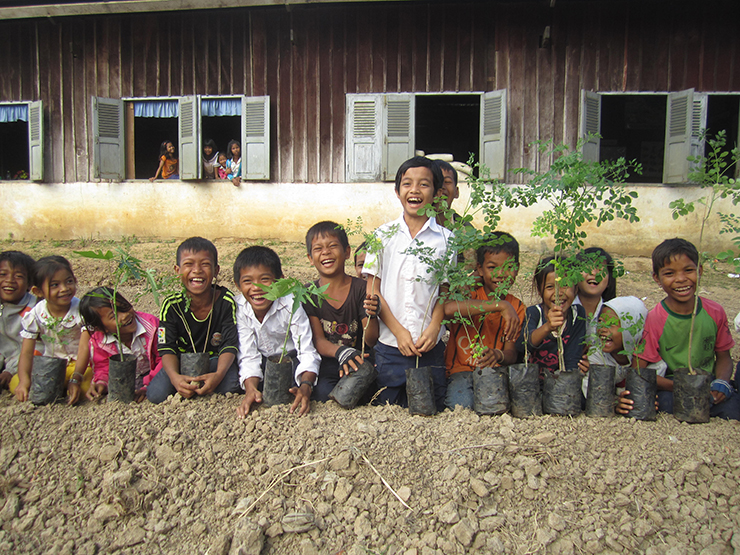 Students in Cambodia prepare to plant moringa and papaya seedlings at their school’s vegetable garden as part of a Cambodia HARVEST/USAID initiative to teach about nutrition, agronomy and climate.  © USAID/Cambodia HARVEST

The power of education

Achieving a new global mindset on climate change and sustainability starts with education. How can the international community collaborate in climate education to bring about behavioural change?

Humankind will only provide a sufficient response to avert catastrophic climate change if it undergoes a complete transformation in behaviour and abandons the norms of the last two centuries. In turn, this transformation will only be effected through education. Climate change education is not just about raising awareness about the consequences of consumption, it also has the power to promote changes in attitudes and, crucially, behaviour.

Climate education is not a new phenomenon and a framework has been constructed over several decades that will assist the global community in acting in concert. Its starting point can be traced to the 1972 Stockholm conference, which set the stage for greater awareness of the need to advance education about the environment internationally. Subsequently, two conferences took major strides in establishing and defining the discipline.

First, the International Workshop on Environmental Education held in Belgrade in October 1975 resulted in what became known as The Belgrade Charter. This built on the framework of Stockholm and described the goals, objectives, audiences and guiding principles of environmental education and proposed what has become its most widely accepted definition:

“Environmental education is a process aimed at developing a world population that is aware of and concerned about the total environment and its associated problems, and which has the knowledge, attitudes, motivations, commitments, and skills to work individually and collectively toward solutions of current problems and the prevention of new ones.”

Second, the Intergovernmental Conference on Environmental Education held in Tbilisi in October 1977 led to the creation of what is now known as The Tbilisi Declaration. In many quarters this remains the definitive statement on what environmental education is and ought to be.

The UN has taken up various initiatives that embrace climate change education. In June 1992, the UN Conference on Environment and Development held in Rio de Janeiro led to the adoption of Agenda 21, a non-binding action plan on sustainable development. This paved the way for environmental education to tackle the numerous issues and concerns included in Agenda 21, for example through meetings of the Commission on Sustainable Development, established in December 1992.

In December 2002, the UN General Assembly, through its Resolution 57/254, declared a Decade of Education for Sustainable Development (2005–14). The decade was geared towards promoting and improving quality education, reorienting educational programmes, building public understanding and awareness and providing practical training.

The end of the decade was marked in Nagoya in November 2014 during the Word Conference on Education for Sustainable Development that launched a Global Action Programme as the follow-up to the Decade. The programme intends to generate action in five priority action areas:

The UN Framework Convention on Climate Change (Article 6) and the Kyoto Protocol (Article 10) both encourage governments to educate, empower and engage all stakeholders and major groups on climate change policies. In 2012, the UN Alliance On Climate Change Education was launched with a view to promoting meaningful, result-oriented and effective international cooperation in support of action on climate change education, training, public awareness, public participation and access to climate change information.

The Global Universities Partnership on Environment and Sustainability (GUPES) is another UN initiative promoting climate change education. Launched in June 2012 at Tongji University in Shanghai, GUPES is an interactive network with the aim of promoting the integration of environment and sustainability concerns into teaching, research, community engagement and management of universities. It also seeks to enhance student engagement and participation in sustainability activities both within and beyond universities.

At present, over 500 universities are affiliated with GUPES, from Africa, Asia and the Pacific, Europe, Latin America and the Caribbean, North America and West Asia. GUPES and its partners have stepped up their efforts in promoting climate change education through, for example, developing sourcebooks on reducing emissions from deforestation and forest degradation, climate change adaptation and helping universities make campuses more green and sustainable.

Changing behaviour
Education and awareness-raising activities not only deliver knowledge and understanding but also enable learners to act on the information to bring about change. To achieve long-term behavioural change, climate change education should:

Climate change is real and educating people from an early age about how our actions influence the environment is a vital element in promoting responsible behaviour. This can be scaled up by encouraging innovative teaching approaches to integrate climate change education in schools, to ensure it becomes a sustainable and holistic part of education sector processes and systems. This also means it should be part and parcel of wider education policies and legislation, plans and budgets, curricula and examinations, teacher education, school infrastructure and facilities, learning environments and school governance and management.

Human beings are by their nature resistent to change. While education alone is unlikely to be sufficient to bring about pro-environmental behaviour, it has the potential to put in place the necessary foundations for delivering behaviour change. It is therefore important for each and every individual to motivate each other in changing underlying actions and activities that are potentially damaging to the planet we all share.