The road to cleaner transport

Transport keeps the wheels of our economy turning but is also a major source of emissions. What is the role of policy in creating a transport sector that is fit for a low-carbon economy? 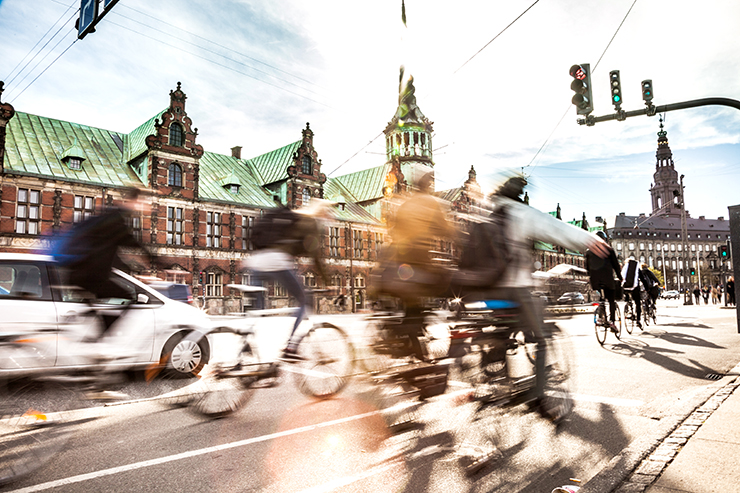 Copenhagen, Denmark, has a noteworthy approach to sustainable urban transport. Over 40 per cent of those commuting to work or education do so by bike  © Leonardo Patrizi/Getty Images

The road to cleaner transport

Transport keeps the wheels of our economy turning but is also a major source of emissions. What is the role of policy in creating a transport sector that is fit for a low-carbon economy?

Transport represents almost a quarter of Europe’s greenhouse gas (GHG) emissions and is a major cause of air pollution in cities. Low-emission transport is therefore essential for meeting our 2030 climate and energy targets and our commitments under the Paris Agreement on climate change – as well as our contribution to achieving the Sustainable Development Goals by 2030.

The low-emission mobility strategy adopted by the European Commission in July 2016 set a clear ambition: by mid-century, transport GHG emissions will need to be at least 60 per cent lower than in 1990, and firmly on the path towards zero.

However, it is now clear that even this goal would not suffice for the EU to do its part towards meeting the goals of the Paris Agreement. Therefore, while the measures proposed by the Commission retain their purpose, they now must be seen as an intermediate step towards a more ambitious goal.

To this end, the Commission will present its vision of a long-term strategy for a low-carbon economy by the end of November 2018, thereby fulfilling requests by the European Council and the European Parliament. The Commission has put forward three sets of legislative proposals and policy measures that aim to ensure a socially fair transition towards clean, competitive and connected mobility for all Europeans.

The EU was among the first jurisdictions to set ambitious CO2 emission targets for cars, in 2009. The 2015 and 2021 targets represented reductions of 18 per cent and 40 per cent respectively compared with the 2007 fleet average emissions.

While we have seen a steady reduction in emissions from new cars and an accelerated uptake of innovative fuel-saving technologies, road transport emissions have not decreased as expected. This is for a number of reasons, including a growing vehicle stock. But it is also due to the growing gap between type-approved emission values measured in the laboratory and real-world emissions.

The Commission’s proposal for new CO2 standards aims to bring further emission cuts and boost the share of zero and low-emission vehicles after 2020. For both new cars and vans, the EU fleet-wide average CO2 emissions will have to be 30 per cent lower in 2030 than in 2021. The proposal sets an intermediate reduction target of 15 per cent for 2025. This is crucial to ensure investment starts now, while the 2030 target gives the long-term direction. The proposal also includes an innovative incentive system to make sure manufacturers deploy zero and low-emission vehicles. Action in Europe will help stimulate the uptake of clean vehicles in other parts of the world.

In addition, the Commission has proposed introducing EU-wide CO2 emission performance standards for lorries. The EU is the only large economy not yet regulating CO2 emissions in the heavy-duty vehicle sector, even though emissions from lorries have risen in recent years and currently account for a quarter of EU road transport emissions. At the same time, many readily available technologies to improve fuel efficiency are not deployed in the market, despite low costs and high net savings potential.

Setting emission standards at EU level is therefore important to deliver on our climate objectives. It will also contribute to improving competitiveness and reducing fuel costs for transport operators, most of which are SMEs. Both the proposals – on cars and vans, and on lorries – allow for a smooth transition to zero and low-emission vehicles while also providing sufficient time for re-skilling and up-skilling workers in the automotive supply chain.

Tackling emissions from aviation
While road transport is responsible for the lion’s share of transport emissions, those coming from international aviation and maritime transport are growing fast. These sectors also need to contribute their fair share to global efforts to fight climate change.

Aviation is one of the fastest-growing sources of GHG emissions worldwide. By 2020, international aviation emissions are projected to be around 70 per cent higher than in 2005. The International Civil Aviation Organisation (ICAO) forecasts that by 2050 they will grow by a further 300 to 700 per cent.

To tackle these emissions, the ICAO has so far agreed on two aspirational goals: first, a two per cent annual fuel efficiency improvement to 2050; and second, the stabilisation of CO2 emissions at 2020 levels through a market-based offsetting mechanism called CORSIA.

Negotiations on the system’s key aspects are ongoing and the EU is actively involved. For the system to be effective, we will need robust rules and adequate participation, as well as other measures such as sustainable biofuels. A long-term goal for the sector would also be desirable.

Aviation has been included in the EU emissions trading system (ETS) since 2012. All major aircraft operators active in the European Economic Area – about 500 in total, including around 200 from countries outside the EU – are duly complying and benefiting from the system. The EU system will be reviewed in due course in light of international developments, while preserving its consistency with the EU’s 2030 climate goals.

In addition to the ETS, the EU is also addressing aviation emissions through other measures, such as support for research, development and innovation, and work on sustainable alternative fuels. These all have the potential to help reduce emissions in the longer term.

Reducing shipping emissions
Shipping is a key enabler of globalisation and the backbone of the global economy. While shipping is in most cases more fuel efficient than other transport sectors, its absolute GHG gas emissions are substantial. They could increase by between 50 and  250 per cent by 2050, according to a 2014 study by the International Maritime Organization (IMO).

At global level, the IMO adopted an initial strategy in April 2018 aimed at reducing shipping GHG emissions by 50 per cent by 2050 compared to 2008. The strategy also seeks to achieve full decarbonisation as soon as possible during this century, as well as improving carbon intensity by at least 40 per cent by 2030. The sector now needs to put the strategy into practice through short, medium and long-term measures that will help emissions peak early and allow the sector to deliver on its goals.

In the EU, shipping is currently the only economic sector that is not directly addressed through a specific measure associated with an objective to reduce emissions, despite the fact that shipping emissions represent around 13 per cent of EU transport emissions.

The EU adopted a legislative framework for monitoring, reporting and verifying shipping emissions in 2016, as the first step of a broader strategy. With the first reports due next year, the scheme will help collect robust data. By making the data publicly available, the scheme is expected to create incentives for greener ships and energy-efficient practices.

Joined-up approach
Across all sectors of the EU economy, the decarbonisation challenge is not just about hitting our climate targets. It is also about transforming our entire economy, beginning with our energy system, while strengthening our competitiveness and innovation power.

Making the most of this transition requires a comprehensive approach. All parts of the transport sector and all stakeholders will play a role – from parts suppliers to vehicle manufacturers, energy and fuel providers to technology developers, infrastructure managers to end consumers. We can only realise the full potential of clean energy and low-carbon transport if we work together.