The road to sustainable transport

The transport sector stands out in its lack of progress in reducing emissions. Radical new approaches are required if the sector is to achieve the necessary 60 per cent reduction by 2050 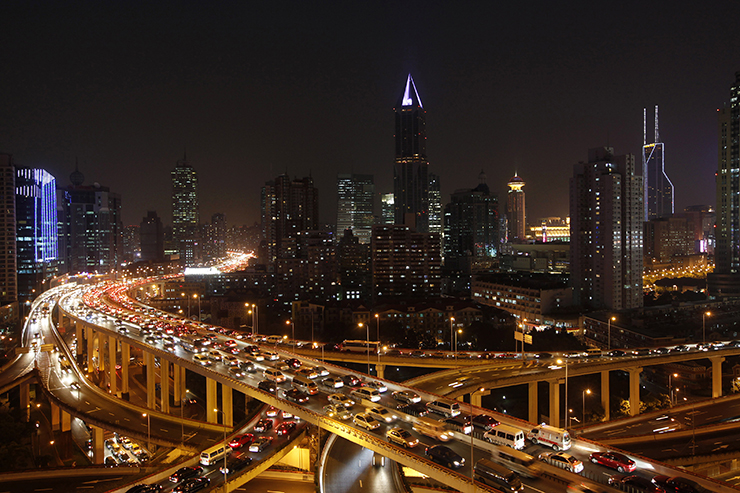 Evening rush hour in central Shanghai, China. A radical shift in thinking is required for policy on, and public perception of, urban mobility.  © Aly Song/Reuters

The road to sustainable transport

The transport sector stands out in its lack of progress in reducing emissions. Radical new approaches are required if the sector is to achieve the necessary 60 per cent reduction by 2050

Transport is central to society. Production, business, leisure, as well as everyday activities, all depend on movement. Global mobility has been built on efficient aviation and shipping networks, enhanced by the new communications technologies. At the more local level, there have also been substantial increases in mobility using all forms of transport as income levels have risen. Cars and trucks are a global business, involving motor manufacturers, the oil industry, many suppliers, energy providers, the construction business, support and maintenance providers and others.

Transport, therefore, plays a substantial role in economies, allowing the distribution of goods and services and providing significant employment.

While other sectors of the economy have decarbonised, transport has continued to increase its consumption of energy and its CO2 emissions. It now accounts for almost a quarter of global CO2, contributing about 8.2 gigatonnes in 2013, making transport the second-leading source of CO2 emissions. If the sector were to make a real contribution to avoiding a 2ºC increase in global temperature and substantial sea-level rise, it would need to achieve a 60 per cent reduction in CO2 emissions by 2050 (on 1990 levels).

Unprecedented change
Yet the Organisation for Economic Co-operation and Development’s International Transport Forum (OECD ITF) predicts massive growth in the transport sector over the next 40 years. It sees the number of cars and light trucks growing from one billion globally to 2.5 billion by 2050. And given expected levels of growth in GDP, even the OECD ITF’s most cautious estimates are for a doubling of travel to 2050, from about 6,000 km per person per year to over 11,000 km, with a corresponding 80 per cent increase in CO2 emissions.

This global picture is unsustainable. It is further compounded by other detrimental factors, such as transport fatalities – 1.2 million killed and more than 50 million injured globally each year; transport congestion; and the reduced quality of life and health from other transport pollutants, principally particulate matter that contributes to premature deaths, and nitrogen oxides and volatile organic compounds that contribute to ground-level ozone pollution.

The speed and scale of change taking place is unprecedented. The UN says that the global urban population is rising by 60 million a year, and predicts that the number of megacities (over 10 million people) will expand from 29 in 2014 to 37 by 2025. This places a new imperative on effective policy actions in cities.

The Sustainable Mobility Paradigm (SMP) is intended to shift thinking by encouraging lower levels of mobility and shorter distances within cities, as well as promoting more efficient low-carbon transport. It is also concerned with the creation of spaces and localities that are attractive and affordable, as neighbourhood quality is central to sustainable mobility.

The SMP focuses not just on the measures that can be used, but the process by which alternatives are discussed, so that there is an understanding of the rationale behind the policy changes and an increased likelihood that behavioural change follows. Public acceptability is central to successful implementation of major change, and it should involve community and stakeholder commitment to the process of discussion, decision-making and implementation. The SMP (Figure 1) emphasises slower travel, reasonable travel times and travel time reliability. In the SMP, the focus is on promoting behavioural change, through reducing the need to travel, shorter travel distances and the greater use of public transport, walking and cycling. Governments can encourage sustainable mobility through policies such as increased investment in public transport, priority for walking and cycling, pricing for access and parking and urban planning (including higher densities, mixed-use developments, transport development areas focused on high-rise development around accessible public transport interchanges, and high-quality local design and use of street space). Policymakers can also set slower speed limits and consolidate freight distribution, as well as promote a range of ‘soft’ measures such as local-level initiatives to encourage car sharing, car leasing, bike schemes and better travel awareness.

All of these policy interventions can be assembled into policy packages that are designed to work together in mutually supporting ways. This means the intended benefits of a change are more likely to be locked in and the rebound effects – where people travel more if they think they are doing it more efficiently or sustainably – minimised.

The shared transport concept combines the need for efficient and modern public transport systems (such as bus rapid transit systems, trams and metro) with new forms of ownership where vehicles are shared rather than owned. This has already happened with cycle hire schemes in many cities, and it is now being extended to small, slow electric vehicles (including electric bikes) that are rented. Many cities do not have room for high levels of car-based mobility, so should be concerned with efficient use of space, in addition to the imperative of low (or zero) carbon.

Achieving sustainable mobility requires demand management to allocate scarce street space to different users by price or regulation (or a combination of both), so that priority users and uses can be made of it. This will vary by time of day and day of week.

In both the passenger and freight sectors, there is substantial empty running, with many cars having only one (rather than four) passengers and trucks travelling around with little or no load. New apps can match loads, times and directions so that spare capacity is utilised (similar to how yield management has been used effectively in the aviation and rail sectors).

A low-carbon transport model shifts away from current thinking about individualism and ownership towards new forms of collaborative consumption and sharing access to transport. Transport is seen as a service to which people buy access when they need it, in the form that is best for them at that point in time. The intention would be to provide a quality door-to-door service that is accessible and affordable to all.

Long-distance travel (greater than 300 km) makes up a relatively small proportion of all travel, but has a major impact on emissions – some estimates put the figure as high as 75 per cent of all transport-related CO2 emissions in the 28 EU countries.

The strongest growth in CO2 emissions (1997–2012) has come from aviation (up 41 per cent) and maritime transport (up 14 per cent), while long-distance road transport increased its emissions by just three per cent. Even though there is some debate over the accuracy of these figures, the trends are clear and strong action is required to improve efficiency, including, for example, the removal of subsidies on aviation fuel and raising the quality standards on shipping fuels.

Mitigation measures involve: reducing the transport-intensity of the economy (known as ‘decoupling’); reducing long-distance journeys (for example, by encouraging more use of tele- and video conferencing); dematerialisation (where technology is transferred so that production can be local); ensuring that load factors are high (such as yield management and load consolidation); and moving towards greater energy efficiency (using larger vessels and planes). Underlying the new ideas and technologies is the need for effective pricing across all forms of transport so that users pay the full costs of externalities (including CO2) and have clear efficiency incentives.

Many cities have already taken the lead in promoting active transport, such as walking and cycling, as part of a healthy lifestyle, and the power of successful demonstration may become infectious. In several of them, certain areas have been rejuvenated into traffic-free spaces where people want to spend time and money – this is the ‘sustainable city’.

But there are also real difficulties in achieving such a vision, as it requires the agreement of many different agencies. With cities expanding at their current rate, the institutional and organisational structures are being overwhelmed. Good governance needs the support of people and businesses, and must be able to operate efficiently and effectively in the new megacities.

Beyond the city, there is the global picture, with long-distance travel and lengthy supply chains, where any unit reduction in the level of carbon emissions is more than outweighed by ever-greater demand for travel and goods.

Overall, the prognosis for substantial carbon reductions in transport is not good. A summary would be: excellent opportunities in cities, good possibilities in the megacities, some potential for maritime transport, but few opportunities in aviation.