Climate change mitigation efforts must recognise that tackling current carbon dioxide flows is not enough; what matters is total emissions to date 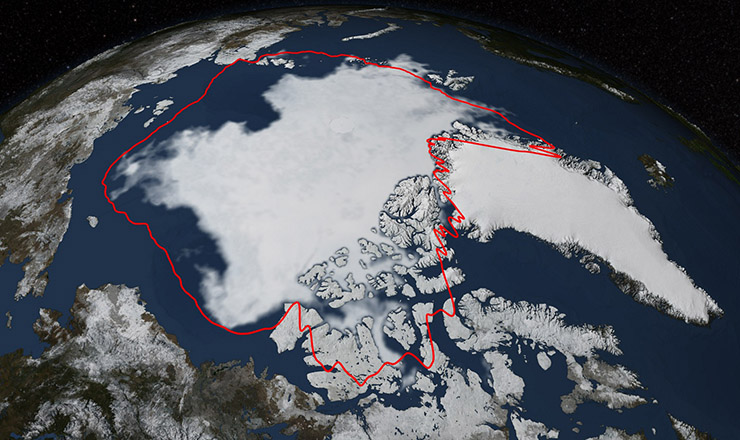 Arctic sea ice hit its annual minimum on 17 September 2014. The red line in this image shows the average minimum extent between 1981 and 2010.  © NASA/Goddard Scientific Visualization Studio

Climate change mitigation efforts must recognise that tackling current carbon dioxide flows is not enough; what matters is total emissions to date

One of the most important new findings of the 2013 Scientific Assessment of the Intergovernmental Panel on Climate Change (IPCC) is that “cumulative emissions of carbon dioxide (CO2) largely determine global mean surface warming by the late 21st century and beyond.”

Unlike most other climate pollutants, CO2 emissions accumulate in the climate system. This simple fact has profound implications for climate policy. Stabilising global temperatures requires net global CO2 emissions to be reduced to zero. What ultimately matters for climate is the total ‘emissions stock’, or cumulative CO2 emissions over the entire industrial epoch, not the ‘emissions flow’, or the rate of emission of greenhouse gases in any given decade.

This is important, because many involved in climate change negotiations still think their ultimate objective is stabilisation of atmospheric greenhouse gas concentrations, and that the rates of emission in 2030 or 2050 are crucial determinants of success.

This is illustrated in Figure 1, which shows three idealised CO2 emission paths. In the green path, global emissions peak around 2015 and decline thereafter at a peak rate of three per cent per year, while in the orange path, they peak in the late 2020s but decline at 10 per cent per year – which would be extremely expensive, and might not be technically or politically feasible. Although peak emissions are very different, total cumulative emissions up to the time emissions reach zero is the same in all three cases. The most likely temperature responses, shown by the coloured lines in the right panel, are almost identical, with the small differences dwarfed by uncertainty in the response (grey bands). Figure 1 also illustrates the importance of the carbon budget over the entire industrial period, not just to the middle of this century. It shows that it is CO2 over all time that matters, not cumulative emissions to 2050. The orange and green scenarios represent very different total emissions from now to 2050 but yield the same climate outcome. Conversely, constant emissions from now to 2050 would represent very similar cumulative CO2 emissions to 2050 as the orange scenario, but a much greater climate commitment in the longer term, because it would imply a much greater emissions commitment after 2050.

Finally, Figure 1 also shows that the longer we postpone reducing CO2 emissions, the faster they have to fall to achieve any given temperature goal (this would not be true of a short-lived climate pollutant like methane). Conversely, for any given rate of reduction after the emissions peak, we must note that committed peak warming has been rising over recent decades at approximately the same rate as cumulative emissions, which is about twice as fast as observed temperatures. Therefore, measures that would have limited CO2-induced warming to 2ºC if initiated in 1992 would yield a peak CO2-induced warming of over 3ºC if initiated today.

Figure 2 shows global average temperatures plotted against cumulative global CO2 emissions, both measured from 19th century conditions. The thin grey line and grey shaded uncertainty plume shows the expected warming due to CO2 emissions alone. The coloured lines and pink uncertainty plume, also plotted against cumulative CO2 emissions, show expected total human-induced warming from all greenhouse gases and other forms of pollution, under a range of scenarios from sustained ‘business-as-usual’ (red line) to aggressive and immediate mitigation (dark blue line). The red scenario moves rapidly off to the top right corner of the figure, meaning CO2 emissions continue to accumulate and temperatures keep rising past 4ºC. In the blue scenario, net CO2 emissions are reduced to zero before 2100, so CO2 stops accumulating in the climate system and temperatures stop rising before they reach 2ºC.

But all scenarios follow roughly the same line: for a given level of cumulative CO2 emissions, the planet experiences about the same level of warming irrespective of whether that CO2 is emitted fast or slow. Warming from non-CO2 sources adds 25-30 per cent to CO2-induced warming from 2050 onwards in these scenarios.

The implications for the cumulative carbon budget are shown by the grey bar at the bottom of the figure. Past emissions from fossil fuel use and land-use change are over half a trillion tonnes of fossil carbon (black bar). Future CO2 emissions must be limited to between half as much again and the same again (dark grey bar) if the goal of limiting global warming to 2ºC, set by the parties to the UN Framework Convention on Climate Change (UNFCCC) in Cancún in 2010, is to be achieved. The precise carbon budget depends on the probability we are prepared to accept of failing to meet the goal, and on what happens to non-CO2 warming, but to have even a modest chance of meeting the 2ºC goal, total anthropogenic CO2 emissions over the entire anthropocene must be less than one trillion tonnes of carbon (3.7 trillion tonnes of CO2), well over half of which has already been emitted.

The IPCC estimates that available fossil fuel reserves (economically exploitable with current technology and prices) exceed this ‘2ºC budget’ by a factor of two to three, with resources (potentially exploitable if prices rise) many times greater still. Hence, any fossil carbon used beyond the trillionth tonne (light grey bar) will have to be captured at source or recaptured from the atmosphere and disposed of if the 2ºC goal is to be met.

Implications for mitigation policy
Many national and international policies still treat climate change as a flow problem, focusing on reducing the overall rate of greenhouse gas emissions in 2020, 2030 or 2050. But while reducing the rate of accumulation of CO2 emissions buys time, it does not solve the problem unless we succeed in the end of reducing CO2 emissions to zero. This is important, because many of the most cost-effective measures for reducing emissions in the short term, such as improving energy efficiency, are not those that will ultimately be needed to reduce emissions to zero.

The key technology required to achieve net zero CO2 emissions is carbon capture and storage (CCS). CCS is in a unique position among climate change mitigation measures: it is needed to allow exploitation of fossil fuel reserves that would otherwise be ‘unburnable’ in a climate-constrained world and also, in conjunction with biomass energy generation or other methods, can provide a means of extracting CO2 from the atmosphere. This is almost certain to be needed either to offset remaining CO2 emissions after temperatures stabilise or, if the safe cumulative carbon budget is exceeded, of drawing CO2 down again.

Largely because of this unique long-term ‘backstop’ role, the IPCC finds that failing to deploy CCS more than doubles the cost of meeting the 2ºC goal (and in many models makes it impossible to meet it at all). Yet because it is expensive as a means of reducing short-term emissions flow, CCS remains a relatively low priority in many climate policy portfolios. Recognising the cumulative carbon budget is therefore essential for governments to recognise the importance of specifically supporting the development and deployment of backstop technologies like CCS.

Cumulative carbon versus short-lived climate pollutants
Limited progress on reducing CO2 emissions has prompted interest in measures to address climate change by reducing emissions of so-called ‘short-lived climate pollutants’, or SLCPs, such as methane and black carbon (soot). Many of the measures required to reduce these emissions are relatively low cost and offer very substantial co-benefits. Their impact, in climate terms, is also relatively immediate. If we halve methane emissions then atmospheric methane concentrations would fall by a comparable amount within a couple of decades. In contrast, if we halve CO2 emissions, atmospheric CO2 concentrations would continue to rise, just half as fast as before.

The myth of ‘CO2-equivalence’
The discovery of the importance of the cumulative carbon budget has exploded the idea of ‘CO2-equivalence’, which is still widely used in climate policy and emission trading systems. Not all measures to reduce CO2-equivalent emissions in 2030 are equivalent. Some, like CCS, provide a route to net zero or net negative CO2 emissions. Others, like improved energy efficiency or reducing methane or soot emissions, do not.