Towards a new business as usual 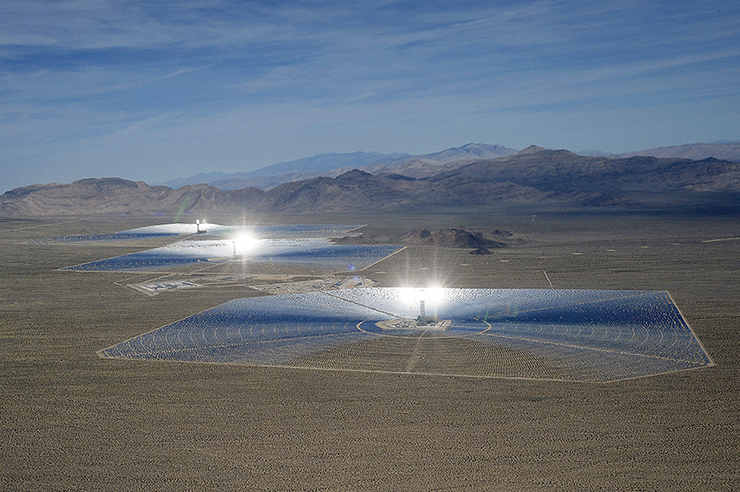 The world’s largest solar thermal power-tower system at Ivanpah in the Mojave Desert, California is part-owned by Google. As a RE100 member, Google has committed to running its global operations using entirely renewable power.
© Ethan Miller/Getty Images

Towards a new business as usual

Too few companies are aware of the impacts that climate change might have on their future growth.

But there’s good news: the long-term commitment of governments provided by the Paris Agreement, coupled with the growing affordability of clean technology, means that world-leading companies are increasingly taking climate action seriously – because it makes business sense.

The threat of climate change to a company may not be as easy to spot as, say, dangerous working conditions or irresponsible behaviour towards the workforce. These are highly visible issues with obvious, immediate and long-lasting impacts, and explain why health and safety and employment rights are ingrained across business operations.

By contrast, only 50 per cent of CEOs surveyed by PricewaterhouseCoopers earlier this year identified climate change as a threat to business growth.1 And yet a separate survey of multi-stakeholders by the World Economic Forum found that a climate-change catastrophe was the biggest potential threat to the global economy in 2016 – ahead of weapons of mass destruction.2

Even if we manage to keep the global temperature rise below 2°C, as required by the Paris Agreement, our reliance on fossil fuels, coupled with unchecked deforestation over the last century, means that business won’t escape entirely unscathed.

Already, increasingly common extreme weather events such as flooding and drought are putting supply chains at risk, with food and beverage companies that invest heavily in natural capital among the most obviously affected. Swiss Re has warned of future high economic costs, citing, for example, the billions of pounds in damaged infrastructure and lost revenue in the US caused by Hurricane Sandy alone.3

Companies have a responsibility to mitigate the risk and to future-proof their business, but this is not the only driver for climate action. As the world moves to reach net zero emissions well before the end of this century, business is in an era of inevitable and unstoppable change. The shift to a low-carbon economy is well underway, and with wind and solar power investment now overtaking fossil fuels, no business wants to get left behind.4

We’re seeing companies go further and faster on renewable energy because they have so much to gain. Renewable power provides greater control over energy costs: in developing markets like India, it can provide greater energy security for an affordable price. And no matter where your operations, demonstrating leadership on the environment is something consumers not only want to see, but now expect.

Led by The Climate Group in partnership with CDP, the RE100 campaign brings together the world’s most influential companies – such as IKEA, Google and Unilever – who are committed to using 100 per cent renewable power across their global operations. The business case is now so compelling that sustainability teams are using it to get senior executives’ support for a 100 per cent renewable goal – highlighting positive impacts on the bottom line.

As Chief Financial Officer of Dentsu Aegis Network Nick Priday recently put it, “it’s important we decouple carbon from growth to achieve long-term savings on our operations and become resilient to resource scarcity and price fluctuations.”

Dentsu is not the only company to recognise the risks and prosper from action. Leading French bank Crédit Agricole’s new renewable electricity contract, which it negotiated at the end of 2015, is expected to save it €9 million over three years. Leading Indian automobile manufacturer Tata Motors reported that in 2014–15, the generation of wind power at just one of its plants resulted in financial savings of 163.5 million Indian rupees (equivalent to approximately $2.4 million), through avoided electricity charges.

Not every business will be a low-carbon leader, but the right choices for tackling climate change are completely aligned with business growth. A commitment to 100 per cent renewable electricity is a level of ambition that will engage senior leadership across procurement, operations, finance and sustainability teams, helping to embed action into the heart of a business.

However, the action isn’t stopping there. RE100 members are also going beyond their own operations, influencing their peers to act on renewable power, cut carbon and build resilience into their supply chains. Unilever, for example, cut carbon emissions from energy use across its manufacturing network by one million tonnes in 2008-15. One of its suppliers, International Flavors and Fragrances, followed the consumer goods giant to join RE100 last year.

Meanwhile, IKEA and telecommunications provider BT are encouraging their customers to embrace renewable power, through solar panels and LED lighting, and by switching to greener tariffs at home.

There is a growing movement of businesses, cities and citizens, all working together, to accelerate the clean-energy transition. They are sending a clear message to investors and utilities that the demand for renewables is there, and that it’s time to develop cleaner and more efficient portfolios. As more and more states, regions and even countries set 100 per cent renewable-energy goals, the market will expand even further.

As business works to do its bit to deliver on the Paris Agreement, there is still a lot to play for. Leading companies continue to find new and innovative ways to grow sustainably and adapt to climate change.

Those who fail to seize the opportunities or act on the risks will simply not thrive in the new clean economy.

Climate-friendly practices are becoming the new business as usual. Responsible growth has never been so appealing.

In 2015, multinational consumer goods company Unilever set a target to be carbon positive in its operations by 2030. As well as working to source 100 per cent of its energy from renewables, the company seeks to generate more renewable energy than it consumes – making the surplus available to the markets and communities in which it operates around the world.

Unilever has long been recognised for its environmental leadership. The company knows that the increasing likeliness of extreme weather events such as floods and droughts poses a threat to its supply chain and operations, and that by becoming carbon positive, it can reduce risk while achieving lower operational costs, greater resilience in its energy supply, and a closer relationship with its communities and consumers.

Unilever recognises that achieving 100 per cent renewable energy depends in part on the broader changes taking place in energy markets worldwide. That is why it is helping to drive positive change through its membership of RE100 – a collaborative initiative of the world’s most influential companies committed to 100 per cent renewable power.

In May 2015, Unilever reached a major milestone when its manufacturing network achieved an annual saving of one million tonnes of CO2 compared to 2008. The company reduced CO2 from energy by 39 per cent per tonne of production since 2008, resulting in cost savings of around €330 million.

Unilever’s Partner to Win programme is one example of how the company is lowering CO2 emissions through innovation. The company works with selected key suppliers to bring leading-edge products to the marketplace, such as climate-friendly ice cream freezers that use energy-efficient, hydrocarbon refrigerants, and compressed deodorants that require less packaging and extraction of raw materials. Unilever is sharing its revolutionary technology with competing manufacturers in a bid to help the whole deodorant industry cut its aerosol footprint by 25 per cent.