Not everyone sees climate action as a force for good, and resistance to the Paris Agreement comes in many guises. What can be done to convince those who fear the switch to a low-carbon economy? 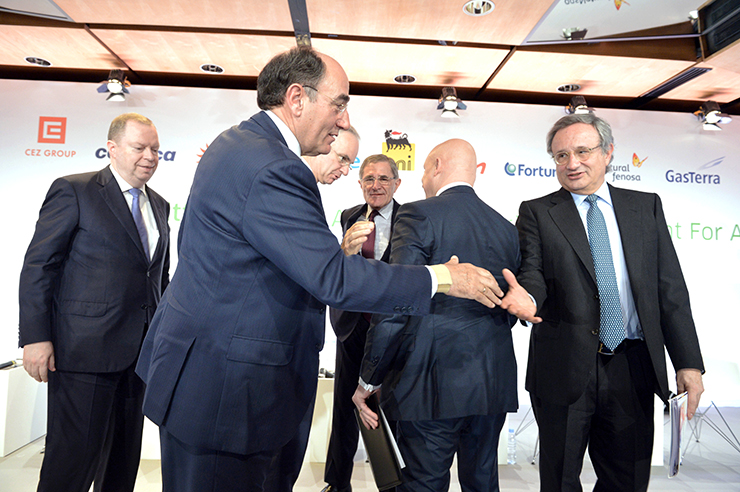 CEOs of leading European utility companies, members of the Magritte Initiative, during a press conference at COP21. Such vested interests have the potential to be part of the solution, or part of the problem
© Eric Piermont/AFP/Getty Images

Not everyone sees climate action as a force for good, and resistance to the Paris Agreement comes in many guises. What can be done to convince those who fear the switch to a low-carbon economy?

By Manuel Pulgar-Vidal , Head of Climate and Energy, WWF

Every revolution creates losers as well as winners. The economic and social revolution we must undertake to prevent dangerous climate change is no exception. However, while many of the winners do not yet exist – future employees of new industries, the generations to come who will enjoy a secure climate – the losers are here now, they are vocal, and they are powerful.

There are, of course, the vast economic, financial and political interests who stand to lose from the decarbonisation of the global economy: the companies that extract, refine, transport and burn coal, oil and natural gas; the investors who own their stock; and the countries whose entire fiscal position rests upon the revenues they earn from selling fossil fuels.

There are also many millions of workers whose livelihoods are threatened by decarbonisation. For them, a climate-secure future appears to be an economically insecure one. They are, understandably, anxious about campaigns to kill coal or move beyond oil – or, for that matter, to halt the deforestation that allows them to plant crops or graze cattle.

There are powerful forces, then, that consider climate action to be a threat to their interests, and who seek to undo global and national efforts to reduce emissions. While they have not entirely succeeded – as the landmark Paris Agreement shows – they have certainly slowed progress. And it is fair to say that with the election of Donald Trump in the US, and support for nationalist parties and causes in Europe, those prioritising immediate self-interest over addressing long-term collective problems like climate change have some momentum behind them.

How do those of us who remain deeply concerned about the problem of climate change seek to convince those who disagree? How do we continue to make progress, while respecting and supporting those for whom the change we need to see will come at a cost?

Presenting a clear message
Success in Paris in 2015, and the failure of previous climate conferences, has taught us important lessons about how to make progress based on international consensus. A crucial step forward was in allowing countries, through their intended nationally determined contributions, to volunteer their own emissions goals. This was vital in creating the confidence needed to reach agreement.

Another key element was the recognition that the climate process is a political one, in which decisions are made by politicians who need to see political outcomes for the time and resources they invest. Without their continued enthusiasm for the process, the political arguments will be won by those resisting change.

Science has, of course, had a critical role in underpinning the process and building political consensus for action. It was the impact of the first assessment report from the Intergovernmental Panel on Climate Change (IPCC) in 1990 that led directly to the 1992 Rio Declaration, and the creation of the UN Framework Convention on Climate Change. The IPCC’s fifth assessment report – published in 2013 and with its recommendations for policy-makers – laid the foundations for agreement in Paris in 2015.

The fourth element is finance. Moving away from fossil fuels towards renewables will, over the medium term, reduce the costs of energy, while bringing enormous co-benefits regarding human health and employment. But, in the near term, this transition will create burdens that the poorer parts of the world are ill equipped to bear. The commitments for rich countries to provide $100 billion a year in climate finance did much to build consensus around a climate agreement.

How, then, is the progress made in Paris to be built upon and continued, especially in the face of vested interests and anxious electorates? The starting point has to be continuing to present a clear message based on the science behind climate action. We are already seeing impacts that threaten vulnerable ecosystems that are important in their own right, and relied upon by humans.

Climate change is threatening a mass extinction at a scale not seen for 65 million years. It is impossible for anyone concerned about conserving nature to be anything but horrified by that fact. It is time to better integrate into the climate agenda the urgent need to protect biodiversity, and to make explicit the links that exist between nature and human development.

But we also need to better integrate the economic dimension of sustainability with our concerns for the social and environmental dimensions. A stable climate is as important for a healthy economy as it is for healthy ecosystems.

It is encouraging to see many of the world’s largest investors recognise the threat posed to their investments from climate change. They have been encouraged by those bodies that regulate them, and which are concerned about the stability of financial markets, to analyse, disclose and better manage climate risks. Hopefully this increased scrutiny will persuade those parts of the financial system that continue to fund fossil-fuel development to reconsider the risks they are assuming.

This integration needs to reach the very top of government. A lesson from the climate talks is that responding to climate change is an endeavour that reaches beyond the resources of environment ministries. At Paris, it was taken up by the world’s leading diplomats. Now, it is time for the world’s ministers of economy and finance to meet to discuss climate change.

For it is the economic dimension where the battle to overcome vested interests and address climate change will be won or lost. For those of us who believe in international cooperation to address common threats to humanity, President Trump and his nationalist rhetoric, and rising support for isolationist and often xenophobic politicians seen around the world are deeply troubling. But it is important to recognise that they are democratic expressions of genuine concern about jobs and security.

Addressing climate change can provide answers to some of these concerns. Exploiting domestic sources of renewable energy can make countries more secure within their borders, and less dependent upon imports of fuel from potentially unfriendly or unstable countries. The low-carbon transition promises to create more jobs than it destroys. But this must be better communicated and, crucially, those whose jobs will disappear must not be left behind.

Putting a price on carbon, and eliminating what the Organisation for Economic Co-operation and Development estimates is $160 billion of annual subsidies on fossil fuels, would create ample revenues that could be directed towards helping the losers from the low-carbon revolution. Doing so would build support for climate action and undermine those vested interests that would seek to block it.

And let’s be clear: should this revolution not succeed, none of us will be winners.