The UN’s best allies are in the business sector

To tackle climate change, we need to reinvent our growth model and recognise that the UN and business need each other desperately 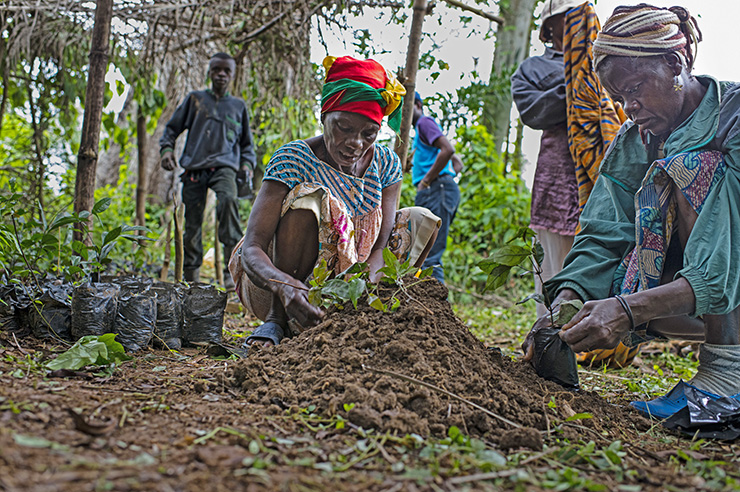 Planting the edible vine eru in the Cameroon forest. Iniatives like this, which protect forests and support their native communities, exemplify the new symbiosis needed between the UN and business
© Ollivier Girard/CIFOR

The UN’s best allies are in the business sector

To tackle climate change, we need to reinvent our growth model and recognise that the UN and business need each other desperately

The 1992 film The Insider recounts the true story of Jeffrey Wigand, a former head of R&D at tobacco company B&W, who tells the media that his colleagues not only knew that cigarettes were cancerous but were trying actively to make them even more addictive. Just as his interview was to be aired, B&W intervened.

But the truth will out and, today, the tobacco industry’s deceit is common knowledge. The fall-out is now also wielded widely as a cautionary tale for companies that cling to business models, supply chains and products that harm the societies they are supposed to serve.

As Paul Polman, CEO of Unilever and undoubtedly progressive business’s most effective spokesperson, has said: “If you work at an insurance company that sells premiums you wouldn’t even sell to your wife or mother, how happy would you feel to work there? …It certainly doesn’t create the energy and engagement you need to be a long-term performing company.”

Black spots remain. Just four years ago, a criminally flimsy textile factory in Dhaka District, Bangladesh collapsed, killing over 1,100 workers. Some oil and gas companies still continue to shirk responsibility for warming the climate and thus putting humanity at grave risk. And despite the exposure of cigarettes for what they are, tobacco still kills more than seven million people every year.

The biggest problems are the biggest markets
Yet, by and large, business leaders – the competent ones, anyway – recognise not only that they can’t run successful businesses by screwing people over, but also that commercial success depends on being able to align business growth with human growth.

As Peter Diamandis of Singularity University says, “the biggest problems on the planet are the biggest market opportunities”. Thus Unilever is making money by selling household cleaning products that improve sanitation. Mastercard is making money by increasing financial inclusion for the world’s unbanked. Tesla is making money by driving the technological and commercial innovation that we need in batteries if we are to build an energy system in which renewables play a starring role, and not just a bit part.

Note: they are making money, not giving money. For those parties like the UN that are seeking to mobilise business as a partner in achieving social goals, this is a crucial distinction. Businesses need to see the upside of leading, not just the downside of lagging. They need to be aggressive and creative, not defensive and compliant.

Initiatives like the UN Global Compact have been vital in building new business norms and in getting the private sector to accept their share of responsibility for the common good. But ultimately the full power of business will be unleashed by the push and pull of revenue, profit, demand, cost and returns on investment – in short: by the levers of growth.

Speaking in January in Davos, UN Secretary-General António Guterres noted that full implementation of the Sustainable Development Goals (SDGs) could yield something like $30 billion return on investment (ROI) per year. This is the right kind of narrative.

But there is a major caveat here. While appealing to the growth motive is surely the path to getting the private sector to throw its weight behind the Paris agreement, the SDGs and the like, we need also to recognise that the prevailing growth model is broken. So while the UN needs to learn how to speak more commercially, business needs to be prepared to redefine the terms of its success.

Our current growth model is literally eating itself. It is dependent on producing and consuming as much stuff as quickly as possible and rooted in metrics that do not reflect the true value or cost of activities.

Hershey, a 123-year-old American company that sells chocolate bars, attributed its poor performance in 2015 not to competition but to the fact that its customers could no longer afford its products.

So as the UN adjusts its narrative to hit the growth motive, it should also shift focus to the fact that we need to reinvent growth. We need growth but of a fundamentally different kind, that drives value creation for the many and not the few, across generations and not quarters.

An education in collaboration
We often talk about collaboration as if it is simply a function of being enlightened and ‘decent’. But the truth is: collaboration is bloody, and it is hard.

When times get tough, the barrier to exit is very low. Collaborations that stick require surgically structured partnerships based on mutual indispensability – where each party has a unique contribution to make and is incentivised to sustain that contribution.

Surely no one organisation has learned more about the hard reality of collaboration than the UN, with – in the words of former Secretary-General Ban Ki-moon – its 193 board members who all believe they are chair. As we move into a world demanding more and more complex forms of collaboration in order to deal with the systems-sized issues we face, this is an education we all sorely need.

The UN needs business and vice versa
Without business the UN will not be able to reinvent our growth model. Conversely, without the UN and the work of the wide range of actors in its orbit, business would arguably be in danger of losing its raison d’être – sufficient numbers of people with the wherewithal to serve as its customers. So it seems that the defining feature of a successful collaboration – mutual indispensability – is in place.

It was once common wisdom that the purpose of business was to maximise shareholder value, a notion that Jack Welch, the former CEO of General Electric, has since dubbed “the dumbest idea in the world”. Though Welch’s correction is welcome, the idea has created a false and pernicious trade-off between business and society, one which we are still trying to unravel. The purpose of business is to solve problems for its customers. The purpose of the UN is, more or less, the same.

The UN was born out of war. Though perhaps less easy to see, the challenges we are up against today are comparable in severity. In the face of such complexity and volatility, it’s easy to feel outmanned. But the fact is, we live in an age of abundance, with an enormous store of talent, capital and ideas. Corporate balance sheets of American companies alone hold over $2 trillion, and at its peak last year, the global bond market included over $12 trillion in negative yields, demanding that investors actually pay to own them. Meanwhile, the planet has never been home to so many educated minds.

If we can make the alliance between the UN and business stick, we can unlock this abundance, creating a saner economic model that delivers genuine human return.