To limit global warming to 1.5ºC we will need fundamental shifts in our economic and financial policies – by 2020 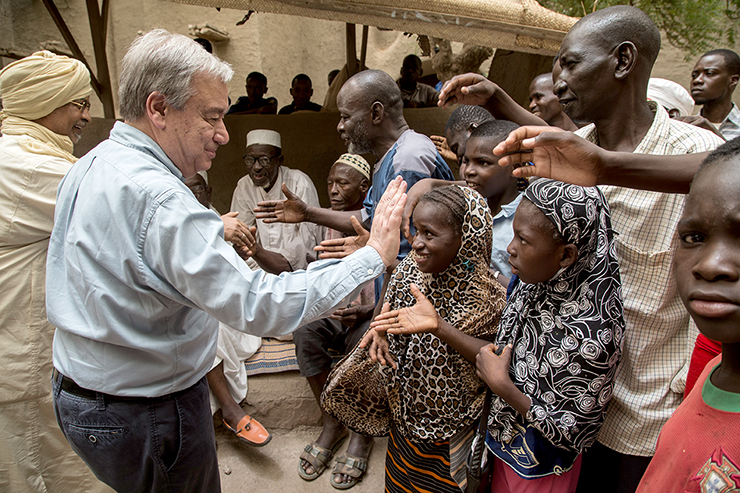 UN Secretary-General António Guterres meeting residents in Mopti, Mali. Like other countries in the Sahel, Mali is acutely experiencing the impacts of climate change, suffering frequent droughts and the consequential instability and conflict  © UN Photo/Marco Dormino

To limit global warming to 1.5ºC we will need fundamental shifts in our economic and financial policies – by 2020

The Paris Agreement calls for governments to keep global temperature rise to well below 2ºC and as close as possible to 1.5ºC. We are way off target.

Climate change is running faster than we are. The commitments made so far by parties to the Paris Agreement represent just one third of what is needed. We risk irreversible catastrophe if we don’t act more quickly and with more ambition.

The world has already warmed by one degree. We are already seeing the consequences for people, economies and ecosystems everywhere.

The special report released by the Intergovernmental Panel on Climate Change (IPCC) in October is clear. Limiting global warming to 1.5ºC is still possible and will prevent some of the worst-case scenarios. To limit warming to 1.5ºC, greenhouse gas emissions must come down by 45 per cent by 2030 and reach net zero by 2050. To achieve that, we absolutely must bend the emissions curve by 2020.

As the IPCC stressed, limiting temperature rise to 1.5ºC will require rapid, far-reaching and unprecedented changes in all aspects of society – especially how we manage land, energy, industry, buildings, transport and cities. That means ending deforestation and planting billions more trees. It means drastically reducing the use of fossil fuels and massively increasing renewable energy. It means switching to climate-friendly sustainable agriculture. And it means considering new technologies, such as carbon capture and storage.

Achieving this will require three key shifts. First, we need a new economic framework that integrates climate and disaster risk in all aspects of finance, planning and budgeting.

Last year, the economic costs of climate-related disasters hit a record $320 billion. By 2050, climate change could reduce annual GDP in some countries in South and Southeast Asia by up to four per cent. We cannot afford to ignore climate risk.

Second, we need effective economic policy and fiscal instruments. We need to put a meaningful price on carbon and end fossil fuel subsidies, which today amount to $373 billion a year.

Carbon pricing and ending fossil fuel subsidies can promote the low-carbon and climate-resilient growth we need. Carbon taxes or emissions trading systems are now in place or planned in 70 jurisdictions worldwide. But this coverage amounts to only one fifth of total global emissions. According to the 2018 New Climate Economy report, carbon pricing and ending subsidies could generate nearly $3 trillion in government revenues or savings by 2030.

Third, we need fundamental shifts in climate financing. We need to turn global investment in climate action from billions to trillions. The money is there but the policies that will liberate it are weak or non-existent. Mobilising private sector financing is essential. But public financing and policies need to provide the foundation for the private sector to embrace climate action. Governments need to encourage their banks to support green financing and innovative financial instruments – such as green bonds – and debt instruments that can strengthen the resilience of vulnerable nations.

We need to see the Green Climate Fund become fully resourced and operational. It is also essential that governments fulfil their pledge to mobilise $100 billion a year by 2020 for climate action. In this regard, President Emmanuel Macron of France and Prime Minister Andrew Holness of Jamaica have accepted my invitation to co-chair an initiative to support a political process to meet this pledge.

Finally, we need to avert investment decisions in infrastructure and agriculture that would lock in irreversible, high-carbon, unsustainable development. Some $90 trillion of infrastructure investment is expected by 2030. It needs to be climate friendly.

The next few years are critical. Next September, I will convene a Climate Summit to mobilise action and enhance ambition. We have six areas of focus: energy transition; industry transition; resilience; local action and cities; finance and carbon pricing; and nature-based solutions. We need to show that countries and businesses are putting in place the policies and instruments that we need.

Between now and then, we have COP24 in Katowice in December – this year’s session of the annual UN climate negotiations. It is important that this meeting is a success. We cannot afford another Copenhagen.

We need to come out of the meeting with a robust framework that allows countries to operationalise and implement the Paris Agreement. The negotiations will require strong and visionary leadership from around the globe.

I encourage all to engage in moving these critical issues forward.

This article is taken from remarks made by the Secretary-General at the Climate Finance Ministerial Meeting on 13 October 2018.