We need more cooperation, not less

The global risks facing the world are complex, catastrophic and already upon us. We must adopt radical solutions to improve our ability to address them 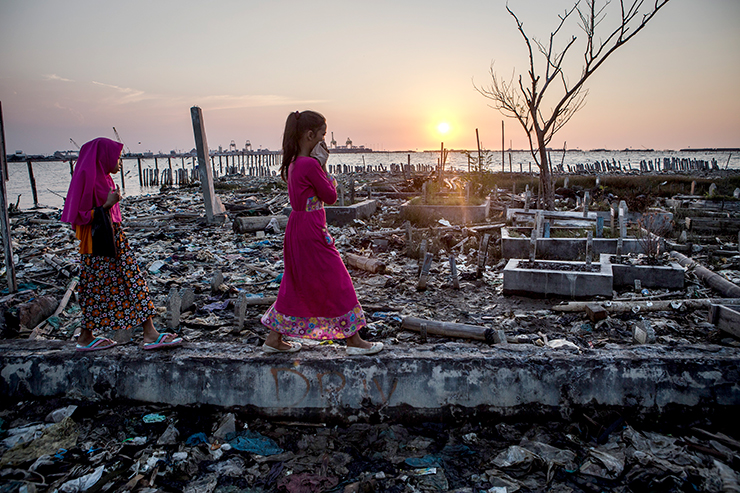 A public cemetery in Semarang, Indonesia, strewn with seaborne garbage. Indonesia, as an archipelago of more than 17,000 islands, is particularly vulnerable to rising sea levels © Ulet Ifansasti/Getty Images

We need more cooperation, not less

The global risks facing the world are complex, catastrophic and already upon us. We must adopt radical solutions to improve our ability to address them

Stopping climate change is going to be an uncertain fight against the clock. That so many states were in agreement both on the Sustainable Development Goals and on the measures that were adopted in connection with the Climate Change Conference in Paris in 2015 raised the hopes of many, even though the commitments were inadequate and non-binding. Implementation seems even shakier. What is certain in the short term is that the unanimity of the Paris Agreement has partly been broken by the USA’s decision to withdraw from it. The uncertainty concerning future measures against climate change has increased.

This is why I welcome the initiative by the United Nations Association – UK (UNA-UK) in publishing this comprehensive report on climate risk. What we need today is more cooperation, not less, at the global level. We need to find, test and improve every conceivable idea that could lead to the creation of better and more robust systems for dealing with the largest global threat to humanity.

Most climate news is negative and suggests that the risks are greater than previously imagined. A newly presented research report, Trajectories of the Earth System in the Anthropocene by Will Steffen, Johan Rockström, Katherine Richardson et al., states that even at 2°C of global warming we could exceed a “planetary tipping point” that will lead to self-reinforcing global warming. This could turn our planet into a “Hothouse Earth”, which would mean a future with even higher temperatures and even more intractable global environmental risks.

Given that global public opinion almost unanimously regards climate change as the greatest threat to humanity, it is even more perplexing that we have not done more to minimise climate risk.

I believe that part of the explanation lies in the complexity of the problems we need to solve. The climate issue may be the most well known and analysed of the major global risks. But there are a number of other threats revolving around climate risk, connected to and often reinforcing the climate threat, or preventing or delaying essential action. There are also the risks of politically motivated violence and weapons of mass destruction. These firstly draw attention away from more long-term problems, and secondly poison the relations between states and ethnic groups, thereby impeding the cooperation necessary to counteract global risks.

Furthermore, there is the risk of major environmental degradation that threatens to deplete our ecological systems. On top of this, extreme poverty in many countries, coupled with climate change and explosive population growth, may lead to uncontrolled migration, which could generate and prolong wars and political violence. Population growth in itself arguably slows down the effects of action on climate change, particularly in the long run.

Other factors contribute to our paralysis in connection with the climate problem: The worse catastrophes are only expected to occur several decades or more into the future – so some conclude that there is no hurry. Politicians are busy solving shorter-term, local problems, being accountable to their constituents in the next general election. Many politicians do not think that the general public is prepared to make short-term sacrifices to tackle the climate threat in the long run.

On the last matter, I believe that politicians have misjudged the situation. Our organisation, the Global Challenges Foundation, has commissioned several international opinion polls to determine global attitudes towards major global risks. From the latest survey, conducted in the spring of 2018 in 10 different countries (Australia, Brazil, China, Germany, India, Russia, South Africa, Sweden, the UK and the USA), it is clear that a qualified majority of respondents are already prepared to make “considerable sacrifices” to try to prevent extreme climate catastrophes – even if they may occur in several hundred years’ time.

Global risks do not respect national borders. One country’s emission of greenhouse gases impacts the entire global climate. For this reason, global risks should be dealt with by means of an overarching plan that has the whole of humanity’s best interests at heart, and that also takes future generations into consideration. This ‘long-term’ problem is in fact so urgent that unconventional and radical solutions are acutely necessary. It stands to reason that the management of these major global risks – and the powers to do so – should be entrusted to a neutral global organisation, such as an empowered and strengthened United Nations or a new body.

International cooperation
In my opinion, there is really no conflict between independent national states and a global organisation that is granted executive authority and enforcement powers in relation to a strictly limited number of well-defined problems.

According to the aforementioned opinion poll, the majority of people – nearly 70 per cent – in those countries are in favour of such a solution. Only 19 per cent are against, while 11 per cent are uncertain. This indicates that in spite of recent nationalistic and populist trends, most individuals are actually in favour of international cooperation on such challenges.

The Foundation recently conducted a competition in which we invited thinkers from every corner of the world to formulate a decision-making model that could better manage the most catastrophic risks in a more effective and equitable way than today. Out of 2,700 submissions from 122 countries, we chose to award prizes to three proposals. Five working groups are now, with support from our foundation, working on different models, in order to present even better solutions in connection with the Paris Peace Forum in November 2018.*

I hope that this report will be read by many decision-makers within politics, business and civil society, with a view to learning more about the risks that threaten us both in the short and long term.

Let us also use this as a starting point for reflecting on how we can create a better and safer world together – before it is too late.

* Natalie Samarasinghe, Executive Director of UNA-UK, was one of the three prize recipients and is now coordinating one of the five working groups. More information is available at www.una.org.uk