What is stopping us?

An energy revolution is underway. Will governments at Paris speed up the change we need? 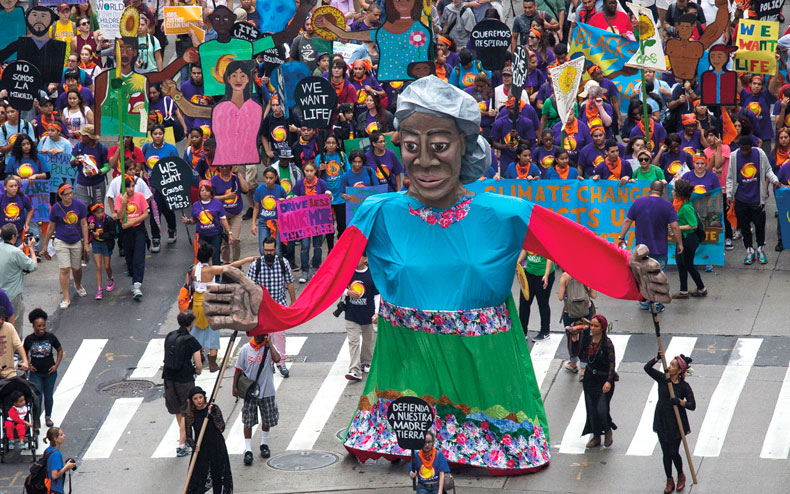 The People’s Climate March through New York in September 2014, at which world leaders, including UN Secretary-General Ban Ki-moon, joined an estimated 400,000 in a demonstration demanding action to tackle climate change.  © Adrees Latif/Reuters

What is stopping us?

An energy revolution is underway. Will governments at Paris speed up the change we need?

If citizens in 2050 think back to when the warnings about climate change were already crystal clear, will they blame vacillating politicians and intransigent fossil fuel companies for their lack of action? Politicians who said they cared yet continued to put the interests of the coal, oil and gas industries before those of the people, who allowed air pollution to choke an increasingly urbanised world and failed to prevent climate change from wreaking increasing havoc on humanity?

Or will people simply be enjoying life with their families – struggling with getting the kids to school on time and how to pay the rent – safe in the knowledge that clean, renewable energy keeps the lights on, powers their businesses and that their children will not fall victim to yet another war over fossil fuels?

This is the choice that faces us now. The future is in our hands. The good news is that a monumental shift is underway in how the world meets its energy needs. A true energy revolution has already started all over the world. 2014 saw China use less coal for the first time this century and install as much solar capacity in one year as the US has ever done.

Such changes have made it possible for China to pledge that it will halt its relentless rise in climate pollution by 2030 at the latest. That’s not yet enough for a safe future. But if during this year China manages a significant shift away from coal it will not just end unacceptable levels of smog for millions of China’s citizens. A continued decline in China’s coal use also increases the likelihood of China adopting an even more ambitious climate pledge internationally.

At this December’s climate summit in Paris, politicians have an opportunity to speed up the transition that is already underway. And to acknowledge that an ever-growing number of citizens are pushing their politicians to act, and fast.

2014 saw the rebirth of the global climate movement. People around the world are turning the latest, frightening warnings from climate science – brought together in the Fifth Assessment Report of the UN Intergovernmental Panel on Climate Change – into a message of hope. In September 2014, 400,000 people marched in New York to say: enough is enough – we demand serious action now. On 10 December 2014, the largest-ever climate march in Latin America took place in Lima, Peru to coincide with the UN Framework Convention on Climate Change (UNFCCC) meeting.

At the same time, it must be increasingly obvious, even to the most hard-headed of people, that acting against climate change delivers jobs, protects livelihoods and creates new opportunities. The days are over when combating climate change could be considered as a burden – except, it seems, in the halls of the international climate talks.

A real possibility
Renewable sources of energy are simply the most economical options for new power capacity in an ever-increasing number of countries. Wind energy, for example, is the cheapest way to add electricity to the grid in countries including Australia, Brazil, Mexico, South Africa and Turkey.

Governments are not entirely tone deaf to popular growing demands, or to the changing economics of climate action. For the first time ever, the official negotiating text for the UNFCCC includes a carbon-free future as a possible goal. The text agreed in Geneva in March contains proposals for the world to be zero carbon by 2050. Of course, this is just a draft for now. And some of the proposals are laden with weasel words that must be excised.

But the fact that climate negotiators are talking about a carbon-free future shows that this is no longer merely the green vision of climate activists. Even in the eyes of government officials it is a real possibility. It is vital that the document retains a commitment for the world to be carbon-free by 2050. This needs to be further strengthened by concrete proposals to accelerate a transition to 100 per cent renewable energy for all.

Achieving this requires a diverse coalition of players. One example is a new alliance in the oil-rich nation of Norway, where, for the first time in the country’s history, the environmental movement is actively cooperating with leading trade unions and the Norwegian church. Norway’s trade unionists are part of the call for a transition to a renewable economy, and environmentalists support the demand that the transition must be fair for those currently employed in the fossil fuel sector. The church is not alone in viewing the transition as essential on ethical grounds.

The good news is that societies, in Norway as elsewhere, that meet their energy needs renewably can provide decent jobs – millions of jobs. The International Labour Organization, for example, found that policies that facilitate the energy transition and combine economic development with environmental improvements could deliver an estimated net gain of up to 60 million jobs.

Change becomes possible when people believe it is possible. This December’s Paris climate summit must become a staging post on the road to a world run on renewable energy. Urgent warnings from climate science, public enthusiasm for change, the growing number of climate alliances and the economics of renewable energy all resonate on the side of climate action in the run-up to Paris.

There is still time to secure a safe future for us and our families that avoids catastrophic climate change. But this can only happen if, when they meet in Paris, governments act on the basis of common societal interest and not on behalf of the polluters. They must dare to choose a fossil fuel-free future that benefits all of humanity.