What role for carbon capture?

How can we reconcile the potential for carbon capture identified by the Intergovernmental Panel on Climate Change and the opposition to the technology from environmental groups? 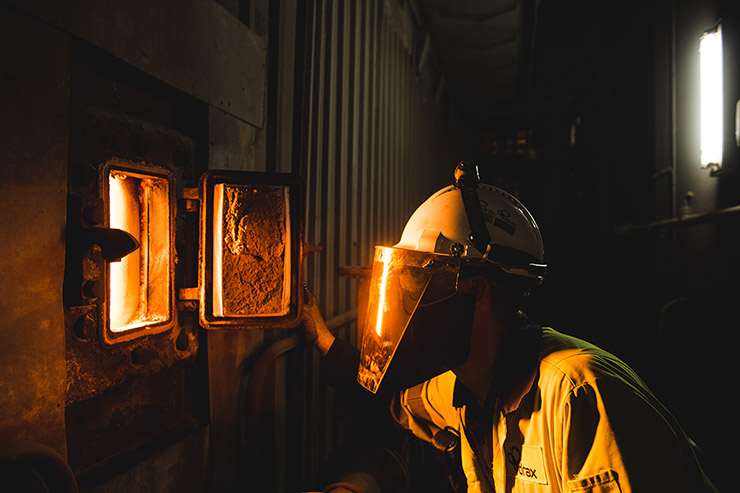 An engineer inspects a biomass furnace at Drax Power Station in the UK. A project at Drax has been capturing CO2 at a rate of a tonne per day. The goal is to generate negative emissions within the decade. © Dan Lewis/VisMedia

What role for carbon capture?

How can we reconcile the potential for carbon capture identified by the Intergovernmental Panel on Climate Change and the opposition to the technology from environmental groups?

A candid view of recent and future energy projections indicates that the hope for a future energy infrastructure free of CO2 is naïve, especially in the short term. Instead, we can expect that much-needed continued economic development will drive substantial increases in energy demand, with developing economies dominating new sources of CO2. The climate issue is clearly too urgent to wait for a transition from fossil fuels. Therefore, the hope of mitigating climate change through decreasing global CO2 emissions depends critically on carbon-capture technologies. This is recognised by the IPCC, the International Energy Agency and others.

Yet carbon capture often encounters rejection – or a begrudging or hostile reception – in climate change circles. Certainly, it is among the more controversial of climate change mitigations. Detractors argue that it extends the life of fossil fuels, which are the root cause of climate change. But they too simplistically and hastily conclude that a transition to renewables and carbon capture are mutually exclusive.

While the data undoubtedly support a need for immediate action, carbon capture offers a potentially market-driven complement to renewables – with much greater potential to mitigate climate change than any scenario that does not involve it.

Carbon options
The large and growing literature on carbon-capture technologies frequently cites 90 per cent capture from power plants and industrial facilities as a figure of merit, but with no justification of this number. Given that climate change mitigation requires reducing CO2 emissions by more than the total of all such large, stationary sources, the 90 per cent target seems low. Capturing carbon from these large fixed sources requires much less energy and capital, and is logistically simpler, than capturing CO2 from the ambient air, from small distributed sources (such as residential and commercial buildings), or from mobile sources (vehicles of all kinds).

Therefore, leaving 10 per cent of the CO2 in large stationary source emissions increases the amount that the more costly, inefficient and difficult systems must capture. A capture rate of more than 99 per cent for large, stationary, continuous sources represents a more appropriate target.

Similarly, a great deal of literature suggests converting CO2 to useful products. This should be pursued whenever it makes economic sense, but the expectations should be weighed against the market and energy barriers associated with such conversion. For example, atmospheric CO2 emissions exceed by a factor of 30 the sum of all carbon used in manufactured products today.

So while there remain some realistic carbon markets, most CO2 will require sequestering if captured in sufficient quantities to influence global climate change. Similarly, thermodynamic barriers dictate that converting CO2 to products will consume much more energy than using other feedstocks. This process can only make sense when the energy used to drive it involves little or no CO2 emissions and, even then, that CO2-free energy is often more effective at reducing CO2 emissions by displacing fossil energy than by making products.

What does ‘good’ capture look like?
Carbon capture technology development currently resides in a classical “technology push stage”: there is no well-defined and long-term market that defines the characteristics of the process, establishes prices, is of sufficient scale, or financially motivates investment. There are a number of regional and national short-term incentives that play important roles in developing technology. However, there are several process characteristics that are most likely to lead to successful carbon capture adaption and market penetration for continuous point sources such as power plants and industrial facilities:

Several of these characteristics couple with each other. For example, systems that retrofit existing infrastructure with little or no required modification have much more value than those that need major or complete upstream changes. The capital and operating costs of carbon-capture systems on power plants far exceed those of any traditional water or ‘criteria’ air pollutant (particulate matter, ground-level ozone, lead, carbon monoxide, nitrogen dioxide and sulfur dioxide).

However, these costs are still small compared to the power plant itself. If the plant must be replaced to enable the capture technology, the effective cost of carbon capture increases many-fold compared with the cost of the capture equipment. The ability to retrofit existing systems couples strongly with cost and will play a major role in commercialisation, especially in the developed world. Similarly, power generation systems have among the highest reliability of any major industrial process. Any capture system that materially increases the chance of an unscheduled shutdown of such systems increases its effective cost many-fold.

Economic viability is critical to achieving widespread adaption of carbon capture as a mitigation tool. Of the several technologies in use and in various stages of development, amine adsorption (see table) has become the de facto standard, and is the most commercially advanced. 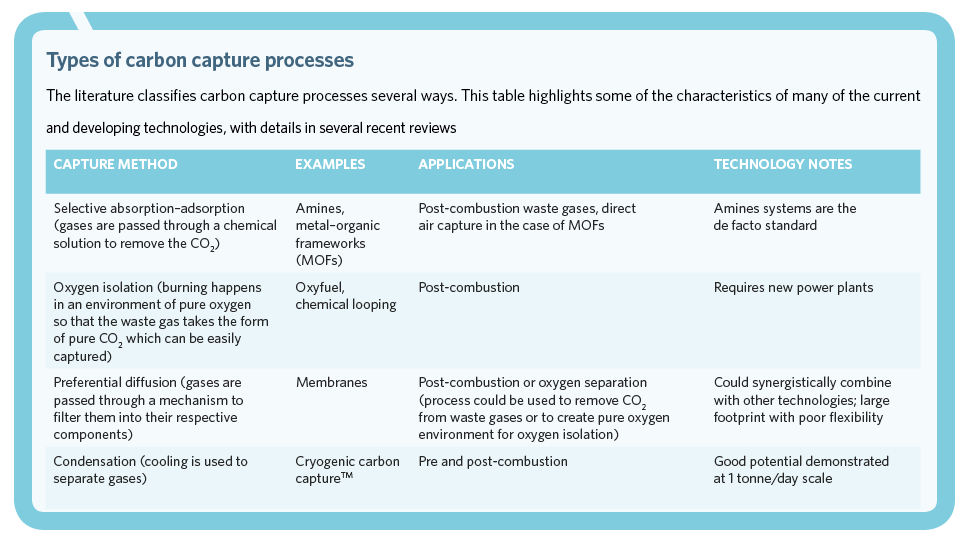 Most of the remaining technologies have successfully demonstrated carbon capture at laboratory up to pre-pilot scale. Several of these technologies require major up-stream modification (such as metal–organic frameworks and membranes) or replacement (as with oxyfuel and chemical looping). Essentially, all of them require flue gas cleaning well above current standards, most cannot easily follow fluctuations, and most cannot achieve very high capture rates at reasonable cost. Uniquely, cryogenic carbon captureTM meets all of these goals.

Economics
While amine technology sets the standard for energy use and cost, estimates of both vary considerably, depending on the precise nature of the technology (primarily the types of amines used).

Models indicate that the amount of energy that amine-based systems require per tonne of CO2 captured range from 1.05 gigajoules (National Energy Technology Laboratory) to 1.52 gigajoules (TNO) and that the power plants typically experience between 20 per cent and 30 per cent decrease in efficiency. The reduction in efficiency, also known as parasitic load, at the fully operational Boundary Dam facility has been 30 per cent.

The combination of parasitic load and the costs of the carbon-capture system itself have a pronounced impact on the cost of producing power – the ‘levelised cost of electricity’ (LCOE). Detailed models indicate the LCOE increases by between 46 per cent and 80 per cent, resulting in costs ranging from $62/MWh to $143/MWh, with a median score of $115/MWh. Retrofit carbon capture technologies decrease this cost by half and carbon capture on natural gas systems is also much cheaper.

Retrofit carbon capture technologies compete with current and future renewable costs. The International Renewable Energy Agency (IRENA) projects that the global average LCOE for onshore wind in 2025 will be $50/MWh (it was already $70/MWh in 2015). Solar photovoltaic is projected to be $60/MWh and offshore wind $120/MWh. However, the fossil plants provide essential grid reliability much more easily compared with the intermittent nature of many renewables.

Not just coal power
The application for carbon capture will include cleaning the emissions of existing coal power stations, particularly in developing countries where it might not be economically viable to prematurely decommission a well-functioning power station. But although most of the research has been carried out on coal-powered power plants, this is not the sole application for this technology.

Natural-gas-derived power has increased dramatically in both developed and developing countries with access to it; carbon capture should be retrofitted here. Aside from power generation, there are several applications for which there are limited alternatives. Cement manufacture, which accounts for approximately 8 per cent of global carbon emissions, will be able to retrofit carbon capture.

Likewise, the steel industry, responsible for a similar share of emissions, is a viable candidate. Carbon capture is central to low-carbon initiatives in both industries. Notable examples include ULCOS (Ultra-Low CO2 Steelmaking), a pioneering partnership of 48 companies and organisations from 15 European countries, and LEILAC project (Low Emissions Intensity Lime and Cement), which is already trialing carbon capture at HeidelbergCement’s Lixhe plant in Belgium.

As stated above, the IPCC has noted carbon capture as an essential tool in all potential pathways to limit warming to 1.5°C. In addition to its role in eliminating emissions in situations where no other mitigation methods have been identified, it also has a role in generating negative emissions. When carbon capture is applied to truly carbon-neutral biomass, there will be net-negative emissions, a scenario described as bioenergy with carbon capture and storage (BECCS).

The Drax power plant in the UK is already running a BECCS project, which is removing CO2 at a rate of one tonne per day. By 2030, Drax intends to be carbon negative, removing 16 million tonnes of CO2 per year. An application that may also make a contribution, but is still very much in its infancy, is direct air capture (DAC). Current levels of performance have a huge gulf to bridge before they are a contender. The Climeworks facility in Switzerland can capture 900 tonnes per year but the costs are prohibitive at $600 per tonne.

The Paris Agreement requires carbon-capture technology to be mainstream within the next decade. Research to date has proven its capability and there must now be a push to accelerate its application across a range of industries. It is time to banish its reputation as a smokescreen for fossil fuels and accept its appropriate use as an indispensable technology in the fight against climate change.