Where next for NDCs?

As countries review their nationally determined contributions ahead of the 2020 stocktake, what chance is there of meeting the 1.5°C target? 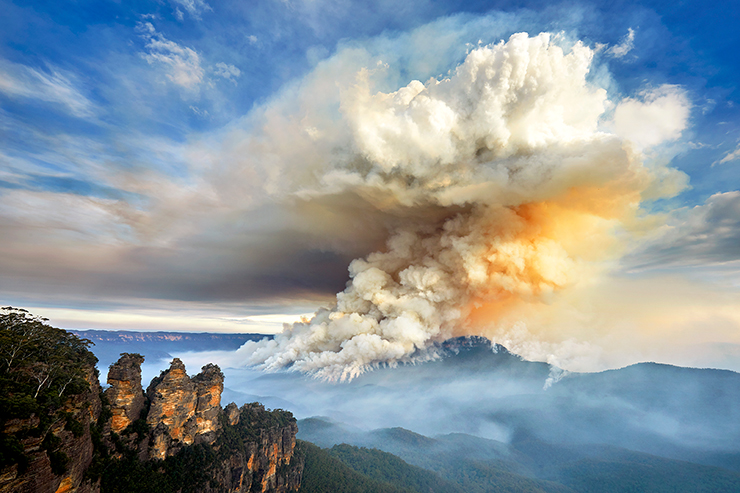 Bushfire in Blue Mountains National Park, Australia. Despite suffering the consequences of global warming on many fronts, Australia is one of several countries that is not yet on a downward emissions path © Andrew Merry/Getty Images

Where next for NDCs?

As countries review their nationally determined contributions ahead of the 2020 stocktake, what chance is there of meeting the 1.5°C target?

At the centre of the Paris Agreement are national commitments to cut emissions – the so-called nationally determined contributions or NDCs. Yet in Paris in 2015, governments already acknowledged formally that the initial NDCs were far from sufficient to meet the Agreement’s long-term temperature goal of holding warming well below 2°C and limiting it to 1.5°C. Collectively, NDCs as they are at present will likely lead to global warming of about 3.2°C above pre-industrial levels by 2100.

Outside of the climate negotiations, the world is dancing a Paris implementation tango. A few countries are stepping forwards, others backwards, in implementing the policy to accelerate the system changes needed to achieve long-term transformation. Current national policies, which in many cases have not yet caught up even to these insufficient NDC ambitions, are projected to result in a warming of about 3.4°C unless action is taken quickly.

On a brighter note, last year was the first time the Climate Action Tracker observed an improvement in climate action globally, and brought its warming estimate down from 3.6°C to 3.4°C – a small but significant improvement, despite some troublemakers rattling the anti-climate science propaganda machine. It also found that if planned but not yet implemented policies are enacted, this would lower the projected warming to about 3.1°C.

Some countries, such as Australia, Turkey, Russia and Saudi Arabia, have yet to get onto a downward emissions path and realise the long-term economic and societal benefits associated with limiting warming to 1.5°C. One such benefit is how accelerated and early climate action will improve energy independence. Almost all countries have between 20 and 80+ times more renewable energy potential than current consumption needs.

In other cases, despite governments continuing to pursue fossil-fuel plans, emissions are continuing to fall because renewable energy has become highly attractive economically. In the US, for instance, fossil fuel-based electricity generation experienced its steepest year-on-year decline since the 2008 financial crisis, despite the government rolling back on climate policies of the previous administration.

Incentives for action
Realising the sustainable development wins from the deployment of technologies and policies consistent with the 1.5°C limit – such as major health, agriculture and economic benefits from reduced air pollution – proves a powerful incentive for action.

China and India are increasingly acting on this, in particular by reducing coal consumption. Five years ago the idea of either country slowing – or even stopping – coal use was considered an insurmountable hurdle, as coal-fired power plants were thought necessary to satisfy the energy demands of these nations. Yet, recent observations show they are now on the way towards overcoming this challenge. Both countries have recognised the benefits of renewable energy in curbing air pollution and, in the case of India, in providing an unparalleled contribution to achieving universal modern energy access.

The NDCs are intended to be dynamic and regularly updated, with higher ambition to reflect advances in science and implementation experience. Indeed, most countries need to urgently update their NDCs to be in line with the Paris Agreement target. Even without considering the much-needed emission reductions this entails, rapid technology developments in key sectors over recent years make it an economic and political necessity to update NDCs, as their underlying assumptions are outdated already.

One of the key grounds for optimism for seeing stronger climate action in the near future is that renewables are now increasingly competitive and often cheaper than fossil fuels. This has changed drastically within just a decade thanks to the rapid increase in installations, incentivised first by a few governments such as Denmark and Germany. This has led to a virtuous cycle of learning and economic scale effects. The sheer size of photovoltaic production and deployment in China, for example, is now lowering prices globally.

Aside from falling costs, a great advantage for renewables lies in their rapid scalability. Even if only part of a solar or wind farm is installed, each unit generates power, thereby lending flexibility to planning. This also means that overcoming energy poverty in the developing world – a key sustainable development objective – is becoming much easier, faster and cheaper thanks to modern renewable technologies and storage systems.

While NDCs are at the centre of the Paris Agreement, the ‘ratchet up’ mechanism of the agreement is its heart. Countries will collectively take a look at how they’re doing on a five-yearly cycle, called the Global Stocktake. They are required at each step to progressively increase their level of ambition, and the Agreement will stand or fall on whether this happens – along, of course, with countries’ commitment to turn ambition into action.

Knowing that the initial NDCs were inadequate, it was decided in Paris that countries would submit upgraded NDCs by 2020. As a vital input to this, the Intergovernmental Panel on Climate Change (IPCC) was asked to prepare a special report by 2018, including on the emission pathways required to meet the 1.5°C target. A process was also established to review the collective effect of NDCs in 2018 and provide a common scientific basis for countries to upgrade their NDCs by 2020.

Initially called the facilitative dialogue, this is now known as the Talanoa Dialogue, and is taking place throughout 2018. It is the first opportunity since 2015 for countries to take a look at how their efforts are stacking up against the Paris Agreement temperature goal. Some countries, such as Argentina, have already increased the targets in their NDCs.

What the science shows is that total greenhouse gas (GHG) emissions need to peak by around 2020 and drop towards zero shortly after mid-century. Energy-related carbon dioxide emissions, the largest source of GHG emissions, must approach zero by 2050. This means that a rapid transformation of the world’s energy systems is needed.

Fortunately, the scientific community has shown that limiting warming to 1.5°C is possible and can be achieved under a range of different global economic and population assumptions. This will have positive and beneficial effects for sustainable development, but only if the world acts to reduce emissions soon. Increasingly, cheap renewable energy, storage technologies and electric vehicles will play a fundamental role in this transition.

More ambitious NDCs
With new heat records around the world, devastating wildfires, water shortages and, tragically, death, the world is reminded that climate change already affects the living conditions of billions. It also illustrates that we are late in the game and the window for action is narrowing, making a rapid acceleration of action imminent.

The latest science, reviewed in the October 2018 IPCC special report, shows limiting warming to 1.5°C will avoid major climate damages. Even half a degree additional warming will produce a bigger cost than previously estimated.

The adoption of the Paris Agreement was a remarkable achievement. This agreement represents our last best chance to come together and take the essential steps to prevent the worst consequences of climate change. With rapid developments in key sectors over recent years, we have technology on our side. These can serve as a powerful springboard for more ambitious NDCs in 2020.