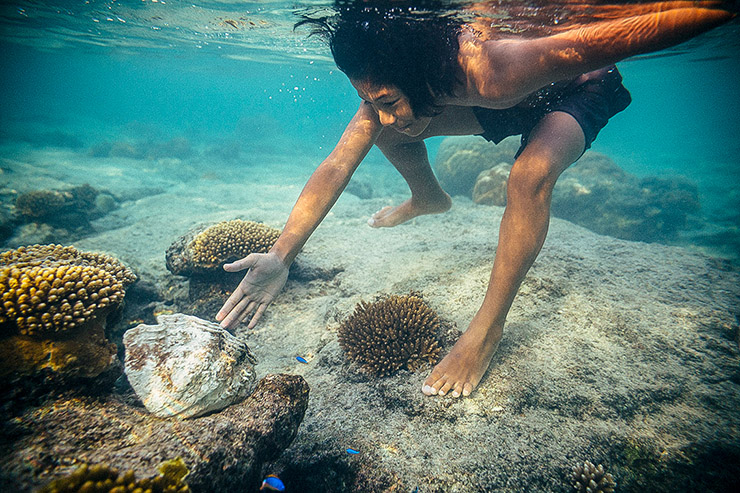 Beveridge Reef, Niue in the Pacific. Coral reefs  are one of the most important ocean features in  terms of supporting life and also one of the most vulnerable to global warming and ocean acidification. © UNDP/Vlad Sokhin

Due to their key role in our ecosystem, ecologists are deeply concerned by their decline. A 2018 study led by marine biologist Terry Hughes found that approximately half of the Great Barrier Reef died in 2016–18 as a result of global warming, bleaching, coastal pollution and overfishing.

Moreover, the Intergovernmental Panel on Climate Change (IPCC) predicts that coral will decline by a further 70–90 per cent if global temperatures increase by 1.5°C. The situation is even more dire if temperatures rise by 2°C, with the IPCC predicting with “very high confidence” the loss of more than 99 per cent of the world’s coral.

The loss of coral has significant feedback effects on ecosystems, impacting marine biodiversity and vital coastal infrastructure. This is something scientists have highlighted for decades: an eight-year study led by Geoffrey P. Jones of James Cook University Brisbane highlights the detrimental effect of coral bleaching in Papua New Guinea, showing that as coral declines so does marine biodiversity. Half of the species surveyed in the study declined to less than 50 per cent of their original numbers.

Aside from the direct impact on marine life, the loss of even 70 per cent of coral – the IPCC’s best-case scenario – will have significant implications for the world’s diet. According to the United Nations Environment Programme (UNEP), fish are the main source of protein for three billion people worldwide. Coral is vital in sustaining healthy fisheries, and therefore plays a crucial role in maintaining the staple diet of almost half of the world’s population. Coral reef fisheries provide 9–12 per cent of the world’s catch of edible fish and 20–25 per cent of fish caught in developing countries.

According to a 2003 study by the Food and Agriculture Organization, in Southeast Asian countries coral fisheries account for 70–90 per cent of the edible fish catch. These figures highlight the devastating impact that coral depletion would have on specific regions, and particularly on the poorest and most vulnerable within these regions.

Coral reefs are a natural wonder that have intangible and inherent value that we risk losing. Reefs drive tourism and local economies. According to a 2011 study from the ARC Centre of Excellence for Coral Reef Studies, each year approximately two million people visit the Great Barrier Reef, generating around €4 billion and 54,000 jobs in Australia alone. Around 275 million people (many in small island developing states) depend directly on coral reefs for their livelihoods.

In addition to maintaining economic livelihoods, coral reefs also play an integral role in coastal protection against natural disasters. The UNEP World Conservation Monitoring Centre found that coral protects over 150,000 km of coastline, typically absorbing up to 90 per cent of the impact load of a wave. A study from the Université de Bretagne Occidentale makes it clear that the loss of coastal protection provided by coral would impact a great deal of the world’s population: roughly 62 million people live less than 33 feet above sea level and less than two miles from a coral reef.

Coral is not only important due to its cultural value: a 2019 study conducted by the US Geological Survey found that without coral the US alone risks losing $1.8 billion worth of coastal infrastructure. These studies further emphasise the protection that coral reefs provide.

The rise in global temperature scenarios set out by the IPCC means that more pressure is being placed on the world’s oceans to absorb CO2. While the ocean is the greatest carbon sink on Earth, the specific role played by coral within oceanic carbon cycles is not well understood. Contrary to popular belief, it appears coral reefs themselves are not carbon sinks and may even produce very small amounts of carbon. But there is less clarity on the effects of the wider coral ecosystem on carbon absorption. But even if coral reefs are not carbon sinks, their depletion would have catastrophic impacts. The loss of 70 per cent of the world’s coral would be a disaster. Losing 99 per cent would be catastrophic.